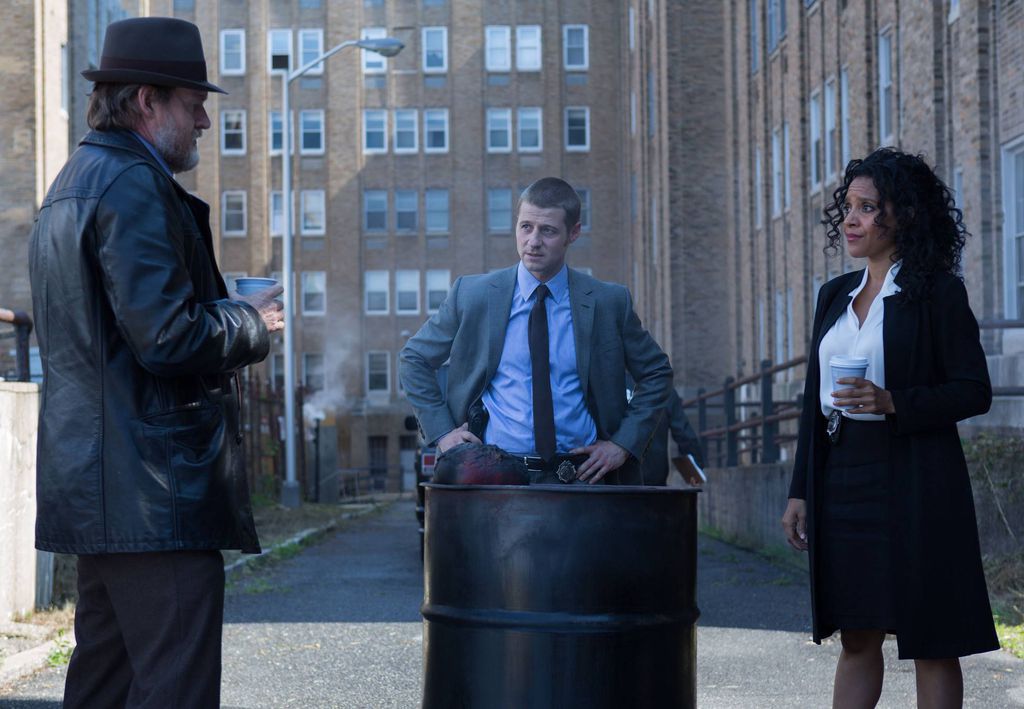 Three episodes into Gotham and I’m still having trouble pinpointing why I find the show as insanely watchable as I do. Despite it’s over-the-top characters and absurd level of camp (it’s practically soaked in it), there’s an earnestness to the show that I can’t help but admire. The modernized 70s aesthetic of the costumes, cars, and hairstyles are mixed with the iconic gothic architecture we’re used to seeing in Gotham City, creating a look for the show that I’m absolutely infatuated with. If nothing else, Gotham might be one of the best looking shows on television. Last week we got our first pre-Batman vigilante in the form of “the Balloonman”, and a sword fight between Alfred and little Bruce. This show never ceases to surprise and entertain me, for better or worse, so what could they have in store for us this week?

We pick up right where we left off last week with the Penguin visiting Gordon at his penthouse apartment. Gordon takes Penguin to the street to “talk” so that Barbara doesn’t have to see him not kill the Penguin (again). The Penguin came to see Gordon so that he could remind him once again that “a war is coming” like a waddling Nostradamus. After Gordon gets distracted by some people down the street, he turns find that Penguin has disappeared and we learn that Batman wasn’t ever especially skilled at the mysterious exit. Apparently, Gordon is just easily distracted.

And then a local councilman meets a friendly constituent on the highest level of a parking garage. The constituent shows the councilman and his security guy the cool kaleidoscope thing he made that shoots out a metal spike in your eye when you look into it. He kills them both with it. Because he’s the Kaleidoscope Killer (okay so maybe he’s not, but that’s what I’m calling him because I’m jealous that Caroline got Balloonman). Gordon and Bullock get wind of the murders from Captain Essen and start hunting down leads.

We go to Fish’s club where we find her weaving in and out of a bad British accent (as usual) while auditioning new weaponized lounge singers for some nefarious purpose that involves them trying to seduce her for some reason. Well, this first one is a good singer but gives a lousy massage and Fish dismisses her. No, I don’t have any idea what’s going on either.

At a press conference, the Mayor presents a development plan that was supported by the Waynes before their murder. The plan is for the district in Gotham known as “Arkham City” named as such because Arkham Asylum is located at its center (and because it’s the name of a multi-million dollar video game franchise). An opposing plan is also gaining support and it’s quickly revealed that the Mayor’s plan is being backed by crime boss Carmine Falcone, while the opposing one is being backed by his rival Sal Maroni.

After another visit to the only room we ever see in Wayne Mansion to talk to Alfred and Bruce, Gordon starts to smell a city planning conspiracy which is confirmed when the Kaleidoscope Killer strikes again. Last time he killed a city councilman who supported Falcone’s bill, but this one supported Maroni. Gordon surmises that the killer must be some sort of independent contractor working for both sides after Nygma tells them that all of the victims have suffered the same fatal puncture wound to their eye socket.

After Penguin sees duffle bags of money being stashed in the back of Maroni’s restaurant, the place gets robbed by three men in stocking masks so light in color they might as well not be wearing any at all. They shoot up the place and kill dozens of people (including the restaurant manager), escaping with one of the duffle bags of cash. Penguin is later found in the freezer with the other duffle bag, heroically saving it from the robbers. Maroni pays back this favor by promoting him to restaurant manager. Everything’s coming up Penguin!

Meanwhile, Barbara thinks Gordon is keep secrets from her so she comes clean about her romantic history with Montoya (who she actually calls “Montoya” and not “Renee” for some weird reason). Gordon gets mad. Barbara gets mad. Everyone is mad. Including me. So we move on to Fish Mooney auditioning another singer who doesn’t sing as well as the first one (I honestly couldn’t tell a quality difference at all), but #2 succeeds in seducing Fish by sitting on her table, kissing her on the mouth, stealing her drink and strutting out of the building. Fish seems impressed. No, I still have no idea what’s going on.

RIP: a Killer and his Kaleidoscope.

Barbara visits Gordon at the station still upset about the secrets she knows he’s keeping from her and gives him an ultimatum: start being honest with her or start looking for a new girlfriend. He chooses the latter and I can’t help but wonder why we’re already doing this in episode four (or at all). Meanwhile, Fish can’t decide between singer #1 and singer #2, so she takes them out to dock (is this the first time she’s ever left the club?) and has them fight each other. #2 wins in a brutal TKO and gets the job and seriously do any of you know what is going on? Why is any of this happening?

The Mayor has another press conference to announce a new version of the Arkham development plan that is a compromise between the plans backed by Falcone and Maroni. This new plan involves the retrofitting of the original Arkham Asylum into a fully functional mental health facility. Everybody wins!

Finally, Penguin visits the apartment where the robbers he hired (the twist!) are holding up, counting the cash in the duffle bag. He comes bearing cannolis that they all scarf down, but they’re poisonous (because of course they are) and now the Penguin has Maroni’s trust, a promotion at work, and a bagful of cash. The Penguin rises!

What’s in store for us next week? Will Gordon and Barbara stay broken up forever despite having yet to conceive a future Batgirl and a homicidal maniac? Why does Fish want to weaponize her new lounge singer? Could Penguin get another promotion?  Will we ever see another room in Wayne Mansion or are Bruce and Alfred doomed to haunt that study for all eternity? Another week down and I still don’t really know how I feel about this show, but I’m having an incredible amount of fun trying to figure it out.

What did you think of this week’s Gotham? Sound off in the comments!