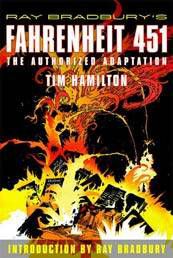 I have been working on this post on and off for a few months now. I could never decide how I wanted to approach it. Should I focus on novels and short story collections? Should I look at the various iterations of Fahrenheit 451? Should I try to do a mix of early stuff and his later works?

I realize that some people are hesitant to read a Bradbury story because of the various genre labels that can be applied to them. They question the quality of the writing, or they are put off because they like to read about things that are “real.” To question Bradbury’s work in this way is misguided.  He was, as Neil Gaiman explains, a man that “transcended genre and became a genre of one; often emulated, absolutely inimitable.”

If you are hesitant about trying Bradbury, then I say take it slow. Try him out in small doses or in different formats. See what fits. There’s enough of his work out there that it is safe to say that there is something for everyone. Here (to borrow a phrase used by Margaret Atwood, another author with strong ties to Bradbury) is a Bradbury “tasting menu” for the new or reluctant reader.

My very favorite Bradbury story  is included in the “novel” The Martian Chronicles. It is unlike the other stories in the collection for two primary reasons. First, it is the only story that does not even mention the word “Mars.” It is also the only story that is completely devoid of living beings (I do not count the dog that stumbles through the pet door and falls down dead on the kitchen floor). I am talking about “There Will Come Soft Rains.”  Inspired by the poem by Sara Teasdale, Bradbury tells of a world where humans have “perished utterly,” leaving behind only the machines that made their lives manageable.

It is one of those stories that was much ahead of its time in terms of the home that he describes. Many of the innovations that he envisioned are now a reality in our homes today. And while it would seem (given that it was written just  a few short years after the bomb had been dropped on Hiroshima) that he is making a statement on the dangers of nuclear warfare, there is a valuable lesson to be learned about over-dependence on technology, too. Bradbury draws upon the not-to-distant past to teach the reader a lesson about the future. It’s a lesson that we have yet to learn.

Similar in theme is the story that David Abrams wrote about this morning, “The Veldt.” Again, he demonstrates how technology, in the wrong hands, can have disastrous consequences. I also recommend (from The Martian Chronicles) “Way In in the Middle of the Air.” While Bradbury’s treatment of race in this, and several other stories, is, perhaps, not as enlightened as modern readers would like it to be, he does, at least, tackle many questions that other authors of the time – particularly in the field of science fiction – were reluctant to address.

If that worked out well for you, consider giving him a listen. 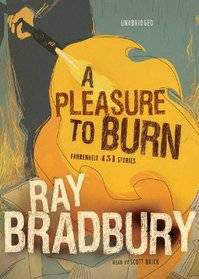 Bradbury was a fan of the audio format, which makes sense considering he grew up in the golden age of radio. His stories beg to be read aloud. In this collection, A Pleasure to Burn: Fahrenheit 451 Stories he assembled the stories that he wrote on the way to his classic novel Fahrenheit 451. The idea of censorship, of a government so strong that it controlled, by means of limiting our access to ideas, our very thoughts, was one that deeply troubled him.  He returned to it over and over again. In “The Mad Wizards of Mars” (sometimes printed with the title “The Exiles”), authors like William Shakespeare, Charles Dickens, Edgar Allen Poe, and Ambrose Bierce face their total annihilation. The last of their works are rounded up and burned on Earth, and they linger on only in the copies that the captain of a rocket traveling to Mars has secreted away. As his crew is assaulted by terrifying dreams and hallucinations, the Captain realizes that the books he had hoped to save are the cause of all their troubles. He orders them destroyed, hoping to restore order.

The fact that he wrote so many stories on this topic suggests an internal conflict on the part of the author. He, like the captain in the story, understood the urge to protect people, to keep the safe from all the horrors that the world has to offer. Bradbury also understands the power of words. In writing these stories, Bradbury is putting that power to use, telling his reader that he has struggled like they struggle, trying to decide what was best for the greater good of humanity. For him, free access to words and all their wonder always won out. Each of the stories in this collection shows us the danger of taking them away, of making them taboo. Scott Brick does an excellent job of bringing this conflict to life. His voice transports the listener to another era, one in which a young Bradbury was sitting at his typewriter, tapping out those first drafts.

Still not quite ready for Fahrenheit 451? Try the (authorized) graphic novel.

If you’ve read the novel, then you understand why so many people have wanted to adapt it to the comic/graphic novel format over the years. Bradbury wouldn’t let them, though.  While the idea intrigued him for many years, he hesitated. He was proud of his work, and he didn’t want to turn it over to just anyone. He wanted to make sure that it was handled correctly, and it was not until Tim Hamilton came along that he felt comfortable turning his story over to someone else. (For the record, he met with Scott Brick, the narrator of A Pleasure to Burn, and approved of him, too.)

In the introduction, Bradbury recounts his journey in writing the novel, from those first short stories, to the final product. He describes Hamilton’s adaptation as “a pastiche of my former lives, my former fears, my inhibitions, and my strange and mysterious and unrecognized predictions for the future.” The format is well-suited to a new generation of readers, and it succeeds in bringing the story to life in a way that deserves the attention of the readers who came before. The pictures on the page are eerily close to the scenes I had created in my head, and this makes the impact of Bradbury’s words even greater.

Give Ray Bradbury a try. We will miss the man, that is certain. But we don’t have to (nor should we) miss out on his work.