There are some authors that have such distinctive hallmarks in their writing that they stray perilously close to being one-note writers. John Irving, if he were any less of a skilled technician, would easily become one of those authors. He’s got a style all his own and themes that resonate through all of his books. At the heart, he is a storyteller. Though his characters are well-drawn, I find the thing I am most drawn to in Irving is his ability to weave a storyline and create these silly, genius moments, mid-story, that just make you guffaw like nothing else (the “Under Toad” from The World According to Garp is the perfect example of this playfulness).

The problem with Irving is that he’s written some masterpieces…and he’s written some clunkers. I hate to admit it about one of my favorite authors, but not every novel has been spot on. Some have been very, very spot off. And his style is intimidating if you’re not familiar with him and his quirks of language. So even if you pick a star to start with, if it’s the wrong one, you’ll be ready to quit within 100 pages.

As soon as we here at Book Riot introduced the Reading Pathways feature, I knew I had to do one for Irving. I don’t know how many times someone has said to me, “Ugh I tried to read A Prayer for Owen Meany but I just couldn’t get into it. How do you do it?” Or something along those lines. So here’s my pathway, with the end goal being A Prayer for Owen Meany.

Start With a Story You Might Already Know
The Cider House Rules or A Widow for One Year: Both of these fantastic novels have the hallmarks of Irving – New England setting, controversial subject matter (abortion in Cider House, adultery and maternal abandonment in Widow), highly literate and dynamic characters, private schools – and each story has been made into a movie (or a portion anyway). The Cider House Rules was a fantastic 1999 film starring Tobey Maguire, Charlize Theron, and Michael Caine, with the script penned by Irving himself, but the novel is much more intricate and nuanced than what is possible to portray on the screen. The first half of A Widow for One Year was transformed into the film The Door in the Floor in 2004 starring Kim Basinger and Jeff Bridges. The complete story as Irving wrote it is again way more involved and sophisticated than the adaptation. Either of these novels are a perfect way to wade into the John Irving pool. 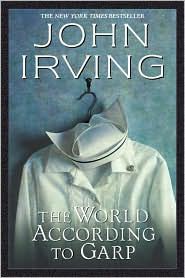 Move onto a Modern Classic


The World According to Garp: Irving loves to write about writers. So many of his iconic characters are writers of some sort or another, but Garp is the quintessential novelist character, and it was often said that until Irving published Until I Find You in 2005, this was his most autobiographical novel. Irving wrote Garp’s life, from conception through adulthood, and it mirrors so much of his personal and professional biography that it seems the basis for the writing cliche “write what you know.” But Garp’s journey is essentially about coming to tolerance from intolerance, and in the process deals with Everyman concerns about family and parenting and success and parenting and parentage. The language and plot complications of Garp is step above that in The Cider House Rules or A Widow for One Year. But the themes of Garp are an excellent introduction to those in what most consider to be Irving’s penultimate work…

Finish with “God’s Instrument”
I won’t deny that A Prayer for Owen Meany is a book fraught with complicated themes and a central character that challenges not only the community around him, but the reader as well. Narrated by John Wheelwright in two interwoven timelines, one in the 50s and 60s and one in present day, we are told of Owen Meany’s conviction that he is “God’s Instrument” though it is unclear, even unto himself, how until the end of his life. John’s present day narrative lends perspective to the story of his friendship with the unusual Owen, whom John credits with much of his adult belief in God. The novel is often challenged for it’s critical perspective on organized religion, and as such, it’s a difficult book for some readers. It certainly forced me to examine my own beliefs when I read it for the first time. Owen’s voice (both narrative and actual voice) is so unique and startling that, even though it would be easy enough to dismiss it out of hand as gimmicky, Irving’s authorial hand is deft and deliberate. The novel is quite simply an American classic that is well worth the effort.

If you can’t get enough Irving…

I also recommend the following novels if you’ve gotten this far and want more:

A Son of the Circus