Impostor syndrome is something I deal with on a daily basis. It’s that little voice at the back of your mind that tells you you’re not good enough and that you’ve managed to fool everyone around you into believing that you are good enough. Whatever your job, it’s likely that you have experienced this at some point, but I think this is specifically common for writers and academics to feel like this. So what can we do when we feel this way? One thing I like to do is reading quotes about imposter syndrome by successful people.

If Brené Brown also feels like an impostor sometimes, it’s likely that my mind is playing tricks on me. If Neil Gaiman has once felt like his work is not good enough, then I am only human for thinking the same about my own work. Learning that other writers and academics have doubts about themselves and their work makes me feel more human and less depressed about where I am in life.

So here are some quotes about impostor syndrome, self-doubt and perfectionism by writers I would consider successful. Some are from interviews and others are from books. They really help me when I am feeling unworthy and need to be reminded that everyone is human. I hope they help you too. 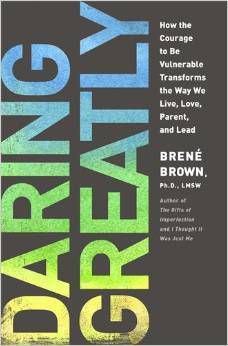 “When we spend our lives waiting until we’re perfect or bulletproof before we walk into the arena, we ultimately sacrifice relationships and opportunities that may not be recoverable, we squander our precious time, and we turn our backs on our gifts, those unique contributions that only we can make. Perfect and bulletproof are seductive, but they don’t exist in the human experience.”  —Brené Brown, Daring Greatly: How the Courage to Be Vulnerable Transforms the Way We Live, Love, Parent, and Lead

“Some years ago, I was lucky enough invited to a gathering of great and good people: artists and scientists, writers and discoverers of things. And I felt that at any moment they would realise that I didn’t qualify to be there, among these people who had really done things.

On my second or third night there, I was standing at the back of the hall, while a musical entertainment happened, and I started talking to a very nice, polite, elderly gentleman about several things, including our shared first name. And then he pointed to the hall of people, and said words to the effect of, ‘I just look at all these people, and I think, what the heck am I doing here? They’ve made amazing things. I just went where I was sent.’

And I said, ‘Yes. But you were the first man on the moon. I think that counts for something.’

And I felt a bit better. Because if Neil Armstrong felt like an imposter, maybe everyone did. Maybe there weren’t any grown-ups, only people who had worked hard and also got lucky and were slightly out of their depth, all of us doing the best job we could, which is all we can really hope for.” —Neil Gaiman

“We all spend our lives kicking the crap out of ourselves for not being this way or that way, not having this thing or that thing, not being like this person or that person. For not living up to some standard we think applies across the board to all of us. We all spend our lives trying to follow the same path, live by the same rules. I think we believe that happiness lies in following the same list of rules. In being more like everyone else. That? Is wrong. There is no list of rules. There is one rule. The rule is: there are no rules. Happiness comes from living as you need to, as you want to. As your inner voice tells you to. Happiness comes from being who you actually are instead of who you think you are supposed to be. Being traditional is not traditional anymore. It’s funny that we still think of it that way. Normalize your lives, people. You don’t want a baby? Don’t have one. I don’t want to get married? I won’t. You want to live alone? Enjoy it. You want to love someone? Love someone. Don’t apologize. Don’t explain. Don’t ever feel less than. When you feel the need to apologize or explain who you are, it means the voice in your head is telling you the wrong story. Wipe the slate clean. And rewrite it. No fairy tales. Be your own narrator. And go for a happy ending. One foot in front of the other. You will make it.” —Shonda Rhimes, Year of Yes: How to Dance It Out, Stand In the Sun and Be Your Own Person

“I don’t just study impostorism, I experienced it. And I didn’t just experience it, I inhabited it. It was like a little house I lived in. Of course, no one else knew I was there. It was my secret. It nearly always is. That’s how impostorism gets such a good grip—it pays you hush money. If you don’t tell anyone about those feelings, then people are less likely to think, ‘Hmm…maybe she really doesn’t deserve to be here.’ No need to give them any ideas, right?

“(…) Most of us will probably never completely shed our fears of being fraudulent. We’ll just work them out as they come, one by one. Just as I can’t promise that learning about presence will give you a Zen master existence in the ‘eternal now,’ I can’t say that you will soon shed all your impostor anxieties forever. New situations may stoke old fears; future sensations of inadequacy might reawaken long-forgotten insecurities. But the more we are aware of our anxieties, the more we communicate about them, and the smarter we are about how they operate, the easier they’ll be to shrug off the next time they pop up. It’s a game of whack-a-mole we can win.” —Amy Cuddy, Presence: Bringing your Boldest Self to Your Biggest Challenges

“Every time I was called on in class, I was sure that I was about to embarrass myself. Every time I took a test, I was sure that it had gone badly. And every time I didn’t embarrass myself—or even excelled—I believed that I had fooled everyone yet again. One day soon, the jig would be up … This phenomenon of capable people being plagued by self-doubt has a name—the impostor syndrome. Both men and women are susceptible to the impostor syndrome, but women tend to experience it more intensely and be more limited by it.” —Sheryl Sandberg, Lean In

“Writing is always full of self-doubt, but the first book [Torch] is really full of self-doubt, and it was much more of a struggle to keep the faith. By the time I wrote Wild, I was familiar with that feeling of doubt and self-loathing, so I just thought, ‘Okay, this is how it feels to write a book.’” —Cheryl Strayed

What are your favorite quotes about imposter syndrome? Find even more quotes about loving books, fighting the good fight, inspirational quotes from children’s books, and more.