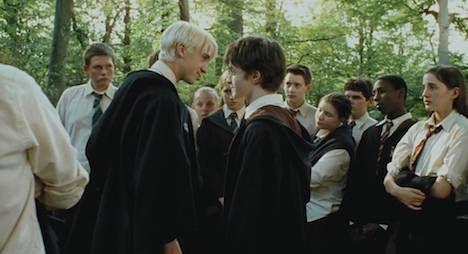 When I was a kid, I had some obsessive passions. (One was books, obviously, but that never went away.) Neopets was my time-sink of choice for most of my childhood, eventually migrating from playing the games and taking care of virtual pets to hanging out on the message boards. Around that time, I was also falling in love with the Harry Potter series, and what better way to express that than roleplaying it on Neopets message boards?

Back in the day, the Neopets message boards were full of preteens testing out their writing skills by roleplaying–usually anthropomorphic wolves or Harry Potter characters, if I recall correctly. (Also, everyone called eyes “orbs.” I hated that.) Drarry, the ship name for Draco/Harry, was of course the most popular choice. At that time, Drarry was the most popular ship–not just in the fandom, but on the internet in general. Much more popular than any straight ship. (It would remain that way until Bella/Edwards sadly usurped them.)

I loved getting to write collaboratively with other people, all in my favorite fictional world, with characters I already knew and loved. It was also my first experience with queer characters, even if they weren’t canon. They might not have existed in text, but there was something amazing, at the time, about seeing a relationship between two male characters be celebrated over all other relationships in the books. This became the place I spent most of my time on Neopets. Unfortunately, Neopets didn’t hold it in the same high regard as I did.

There were whole roleplaying boards on the site, so that wasn’t unusual, but often the threads that were M/M pairings would get deleted by administrators for being “inappropriate.” M/F roleplays that were more mature/sexual were typically ignored. Grumblings began on the message boards about Neopets’s homophobic policy. It was frustrating to continually start a story, only for it to be shut down. Out of this frustration, someone started a message board hosted on an outside site (zetaboards, I believe?) called RAHN: Rebels Against Homophobic Neopia.

This was somewhere we could roleplay Drarry (or any other pairing) without fear that the board would be deleted mid-story. I migrated over, and soon abandoned Neopets completely in favor of this community. Here was a place where roleplays could go on long-term, with pages and pages of content. Instead of writing with strangers, I formed a network of people who went on the forums every day. We shared fanfic recommendations, and even experimented with more risqué roleplays without fear of the admins.

This community changed my life. The friendships I made there were a core source of support through the tumultuous teen years. We grew up together, and eventually roleplaying gave way to just talking about our lives and looking out for each other. There was a thread where we’d post selfies (before selfies were really a thing) and everyone else would compliment them–a huge self-esteem boost for self-conscious teens. From shipping fictional male characters, we started talking about queer rights in general. We starting discussing our own identities. It was the first time I really felt part of a queer-positive community.

When I went to high school, I became best friends with someone I will call A. We both shared a love of Harry Potter, so eventually, I told her about RAHN. We started roleplaying Drarry together, hundreds of exchanges long. We chatted on the OOC (out of character) boards every day with the other RAHN members, becoming part of the core group. We messaged each other on RAHN constantly, staying up all night talking.

It occurred to me one night that I was constantly thinking about A. With a jolt, I realized I had fallen in love with her. Despite the queer-positive environment I now spent most of my time, I had, until that point, been convinced I was straight. I distinctly remember going outside in the middle of the night, lying on the grass, looking up at the stars, and realizing that I was in love with a girl. By the time I got up and went inside, I was at peace with it.

I would go on to tell A, who was already out as bi, how I felt about her. We would have a tumultuous on-again-off-again relationship through most of high school, often documented in messages and posts on RAHN. I would come out as bi, then as a lesbian (and then 10 years later, as bi again).

It’s funny, now, because my biggest complaint about the Harry Potter series is its lack of diversity, both racially and in terms of queer representation, but despite its lacking of queer rep in the text, it was my doorway into a queer world. Because of Rowling’s hands-off approach to the fandom that encouraged fanfiction and roleplay, I was able to explore a world where queer people could exist and even be celebrated. By roleplaying queer male characters, I could glimpse that possibility in safety, without having to admit my own capacity for queer desire. As a young teenager, sexual and romantic desire were minefields, and Drarry gave me an opportunity to map them without personal risk.

Ten or fifteen years ago, there wasn’t a lot of places for queer teens and kids to find worlds that included them. I’m grateful that I found my little corner, carved out in now-defunct message boards and soon-deleted Neopets threads. I’m glad that there are more spaces for young queer people now, ones that aren’t as hidden away. Though there never was any canon representation in Harry Potter (don’t get me started on Dumbledore), I’m thankful for the space the fandom made for us.

Note: This is my experience as a queer woman finding community through HP and Drarry, but I acknowledge that queer men may have had a very different experience with the prevalence of Drarry among female writers/shippers. I don’t mean to dismiss the valid concerns about fetishization of gay men that may be applied to the same fandom and phenomena.