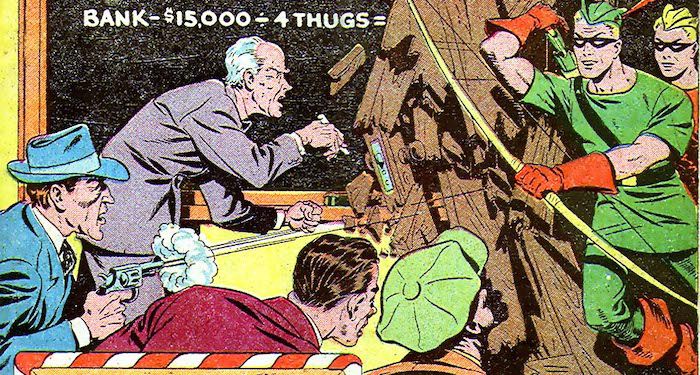 Some superheroes have rogues galleries full of cool, interesting, or just plain fun villains ripe for a million stories. Batman has Two-Face and Ra’s al Ghul; the Flash has Captain Cold and Professor Zoom; Spider-Man has the Green Goblin and Kraven.

Despite the fact that he’s celebrating his 80th anniversary this year, Green Arrow…doesn’t exactly have a comparable roster of enemies. Green Arrow has, like, the Red Dart. (He shoots darts. That are red.)

But I’ve been digging through older GA stories lately, and I’ve discovered a forgotten villain who puts Ollie’s current lineup to shame. My friends, I bring you the brilliant Professor Million.

Professor Million first appeared in More Fun Comics #88 (February 1943) in a story called “The Mystery of the Mathematical Master,” for which I was able to track down a penciller credit (Cliff Young) but no writer. What mystery mind gave us this gift?

The good professor is on the faculty of James College, which has just been offered an endowment of $50,000 to build a new mathematics building — if the college can match the sum, which it cannot. A disappointed Professor Million then sees a news story about criminals making off with an enormous amount of money. “If thieves steal for the sake of evil, why couldn’t I, for a good cause?” he rationalizes. After all, he’s very good at math, which is really all you need to be a criminal mastermind.

Professor Million hires a bunch of career criminals to help him rob the Corn Bank, which tragically is just the name of the bank and does not indicate a bank full of corn. The robbery goes off without a hitch — until one of the underlings gets greedy and decides to take more than the $30,000 the professor ordered. As the chaos escalates, local heroes Green Arrow and Speedy take note.

Alas, the mooks get away and continue their crime spree, and even manage to lure Green Arrow and Speedy into a trap. The softhearted Professor Million forbids his underlings to kill the heroes, but the minute his back is turned, they tie Green Arrow and Speedy up and throw them in the sewer to drown. Fortunately for the Battling Bowmen, the professor is naive, but not that naive.

Professor Million makes the heroes pinky promise not to call the cops, then heads off to his next robbery. But his minions have gotten tired of his insistence on restraint, and tell him that from now on they’re calling the shots and he’s just planning the jobs.

But when they arrive at the next house they’re supposed to rob, it’s actually…a fencing school?! Green Arrow and Speedy changed the numbers on the houses, which they claim means Professor Million has made “a slight arithmetical error” even though that is in no way math, but okay.

Our heroes defeat the mooks and rescue Professor Million, who tearfully explains that he only planned these crimes because he loves math so much. Moved, Ollie offers to let him keep the reward for capturing the minions, which, wouldn’t you know it, comes out to exactly $50,000 — just the amount the good professor needed!

But a life of crime isn’t so easy to walk away from, even for a kindly old professor. Professor Million returned in More Fun Comics #97 (May 1944), which opens with Green Arrow giving tips to an archery club. Little does he know that they are working for Professor Million, who has reluctantly returned to crime in order to endow graduate scholarships for his most promising undergrads. Now that’s an academic advisor!

When the archery club starts to commit extra math-y crimes, Ollie and Roy put two and two together, and we also learn that Ollie knows the cube of 12 off the top of his head:

Once again, the professor only wishes to steal enough to achieve his academic goals and no more, but one of his underlings talks him into applying his amazing math skills legitimately, in order to win a contest by calculating the number of marbles in a fishbowl. Professor Million gets super into it, because he’s adorable.

After he submits the correct answer, though, he realizes that the whole thing was a trap by Green Arrow and Speedy, who have followed his henchman back to his headquarters. He turns the tables on the heroes by using a vacuum to suck all their arrows out of their quivers (okay…?), but leaves a loophole for them to escape his trap, as well as once again stopping his henchmen from killing Green Arrow. The Battling Bowmen round up all the underlings, but Professor Million escapes, and with just enough loot to endow several scholarships. Coincidence, or mercy…?

Professor Million returned in More Fun Comics #103 (May 1945), which begins with him noticing that one of his students, Miss Wilson, is distracted. When he asks her what’s wrong, she tearfully explains that she’s going to have to drop out of school, because her father, a bank cashier, has been framed for stealing $50,000 and will go to jail unless he can come up with the money, which means paying her tuition is out of the question.

Naturally, because Professor Million supports women pursuing higher education even in the 1940s, he promptly rounds up a gang to rob one Mr. Powers, Mr. Wilson’s boss. He’s thwarted by Green Arrow and Speedy, but Mr. Powers is worried by the attempted robbery — because what if this clever mathematician criminal figures out that Mr. Powers is the real thief? What will he do?

Why, he will immediately invent a safe shaped like a dodecahedron, claim to fill it with money, and place it in a museum daring anyone to try to crack into it, obviously. What else would he do?

It turns out dodecahedrons are actually really easy to break into, because of math reasons…but there’s no money inside. Mr. Powers was simply trying to trap poor, altruistic Professor Million. Luckily, Green Arrow and Speedy are there to rescue him! And with the real thief caught, Mr. Wilson is off the hook and Miss Wilson can stay in school.

When Professor Million reads in the newspaper that Green Arrow has arrested one of his former lackeys, the excellently named Dipper Danbury, he becomes convinced by the description of the crime scene that Dipper couldn’t possibly have committed the murder in question. He sends an anonymous letter to Green Arrow explaining his reasoning, but Ollie, who knows Dipper witnessed the real murderer in the act and is hoping the threat of the death penalty will scare him into talking, ignores it. Ollie’s not so big on due process, I guess.

Professor Million decides that Green Arrow is framing Dipper for…reasons, and rounds up a gang to deal with the issue. Little does he know that one of the gang members, a man we only know as “Slugs,” is the real killer!

The professor’s gang breaks into jail and breaks Dipper out. They foil Green Arrow and Speedy’s attempts to pursue them by tricking them into a ditch that’s…like a foot deep, seriously, it’s not a good trap. At this point, Slugs decides to announce that he’s the real killer and murder everyone present.

Of course, Green Arrow easily defeats him, and the criminals are all arrested. Professor Million apologizes for his interference, and promises once more to put an end to his illegal antics.

Unfortunately, he seems to have meant it this time, because the good professor never appeared again. So DC, here’s my plea: bring back Professor Million! There’s so much we don’t know about him! Is he tenured? What is his stance on free college and student loan forgiveness? (Pro, I’m assuming.) Does he still keep in touch with Dipper?

DC, you’ve recently brought back Green Arrow characters Roy Harper and Connor Hawke (and possibly Mia Dearden and Lian Harper, I hope I hope I hope?). Now it’s time to bring back Ollie’s best and most interesting foe. Give us a Green Arrow book, send the 20-ish Connor to college, and let him attend some math classes that lead to awkwardly math-themed, altruistic crimes. Professor Million deserves it!