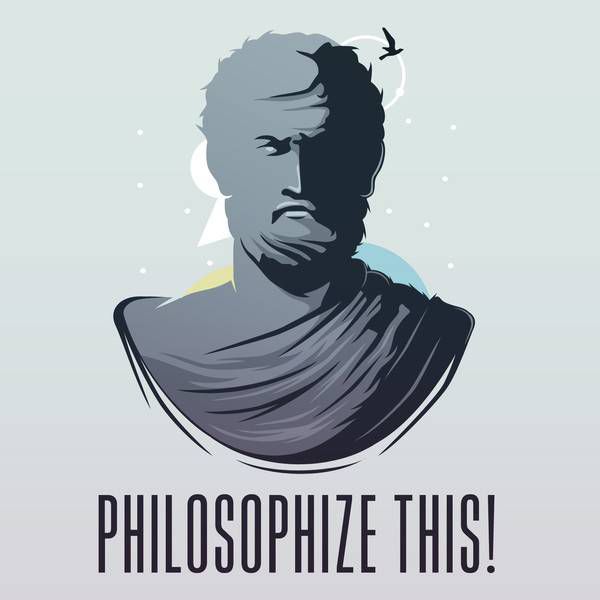 I started listening to the Philosophize This! podcast a couple of months ago because philosophy had become one of those big gaps in my reading life that I didn’t know how to approach. I knew that I would never be able to approach philosophy without some hand-holding, because I’ve tried and failed before. So I used my facility in this new-fangled technology called podcasting to solve my old-fangled problem: my struggle to know what “hermeneutics” actually means.

It’s not that I’m unfamiliar with some works of philosophy. I’ve read Phaedrus by Plato because it was an important plot point in Mary Renault’s The Charioteer. I studied St. Augustine’s Confessions, thanks to an idiosyncratic Catholic school education. Out of the list of philosophers discussed by Philosophize This! so far, I’ve read books by Niccolo Machiavelli and Jean-Jacques Rousseau. I’ve also read Karl Marx (not yet discussed) so all in all, I’m not entirely clueless when it comes to political philosophy. I’ve also read large chunks of Frantz Fanon and Simone de Beauvoir for class.

However, I read many of those books straight through and without any attempt to create an internal debate within myself. I don’t think this is a fine way of reading philosophy—or maybe it is? Furthermore, the scattered times I attempted to read the giants of philosophy like Nietzche, Kant, Hegel, and (ugh) Heidegger have invariably felt like I was treading water. I’ve never even attempted to read Søren Kierkegaard because his name alone signaled that I would not understand him. Between their indiscriminate use of Latin phrases and sentences that span the entire page, these authors always made me feel completely anchorless.

Which is why Philosophize This! was a perfect fit for me. The internet is lousy with philosophy podcasts, but creator Stephen West uses historical and cultural context to trace the threads of various schools of thought as they emerge and morph in history, and he does this in easily digestible, anecdote-filled chunks. This approach allowed me to have some grounding in something more familiar while struggling to understand abstract concepts.

For example, West presents Stoicism as coming from a desire guard against despair amidst the seeming randomness of war and violence during Ancient Times. Knowing this made it easier to understand how someone like Roman emperor Marcus Aurelius could come up with ideas such as, “Begin each day by telling yourself: Today I shall be meeting with interference, ingratitude, insolence, disloyalty, ill-will, and selfishness.” It’s not (just) about doomsaying; it’s about regulating expectations.

I have not picked up philosophy book since I’ve started tearing through the archives (and let’s be honest, “tearing through” means two episodes a week at most), but I’ve already pinpointed which movements and philosophers hold my interest. I’ve already begun reading about the Stoics and would probably turn to Seneca, Epictetus, and Marcus Aurelius when I decide to get serious. I’ve just finished the long series on David Hume, and the snippets of text quoted on the show made me feel like it’s possible for me to understand and appreciate him. Still, I’m struggling to overcome some superstitious dread about diving into a philosophy book again. What if reading the actual words on paper instead of taking in digestible chunks of audio shatters my confidence, turning philosophy once again into an incomprehensible word salad?

The episodes I’m about to listen to discusses one of my philosophical white whales: Immanuel Kant. Here’s to hoping I get to understand him this time.