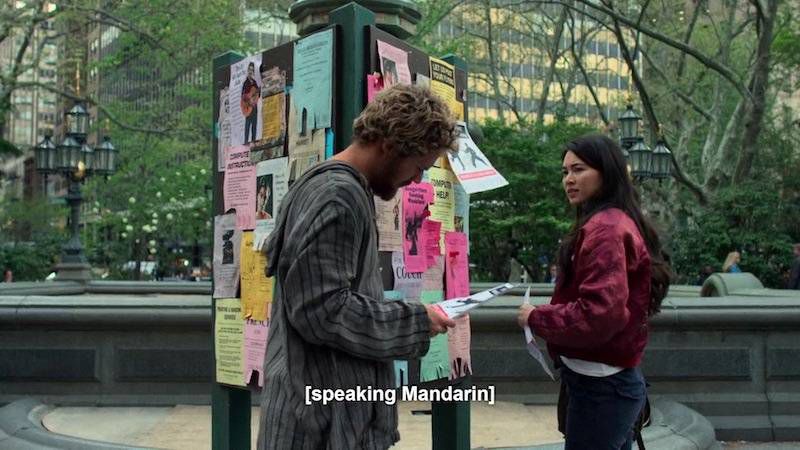 I watched exactly one episode of Iron Fist before backing out. Here’s a sampler: white, privileged, male superhero walks up to a girl, a stranger, takes a wild guess at her ethnicity, and starts to talk to her in Mandarin. Excuse me if I’m not going to subject myself to ignorant drivel for 13 hours?

And how hard is it, in this day and age, with so many people in Hollywood having brought the issue of the lack of diversity  in movies and on TV to the forefront, to be a little sensitive and aware? To not misrepresent, to put in a smidgen of extra effort, and to not give us the very same white-saviour nonsense? Very, apparently, as this interview of creator Roy Thomas proves. You see, he just doesn’t have the time or energy to deal with such complaints.

After many people on social media accused the show of being a sharp turn away from Marvel’s previous attempt at diverse shows with Jessica Jones and Luke Cage, and pointing out a missed opportunity to represent Iron Fist’s character as Asian, this is how Thomas chose to respond:

I try not to think about it too much. I have so little patience for some of the feelings that some people have. I mean, I understand where it’s coming from. You know, cultural appropriation, my god. It’s just an adventure story.

Well, congratulations on not needing to put any thought into people’s ‘feelings’ (these are not feelings, btw, they are important issues of identity). Maybe you should try thinking about it a little?

Don’t these people have something better to do than to worry about the fact that Iron Fist isn’t Oriental, or whatever word? I know Oriental isn’t the right word now, either.

He wasn’t intended to stand for any race.

instead of trying to change somebody else’s story, go out and make up your own character and do a good job of it.

Whoa. I didn’t know we could do that! Seems like a simple enough task, since each one of us is given the same opportunities in this world of absolute equality. Thank you for enlightening us. Now please stop talking.

Seriously, though, as a public service announcement to all privileged creators of media, if you ever get called out for your art lacking diversity, being micro-aggressive, or racist, this is the least preferred response we want. Acknowledge the gaps in your knowledge, attempt to plug them in, try harder and better next time, or don’t try at all.