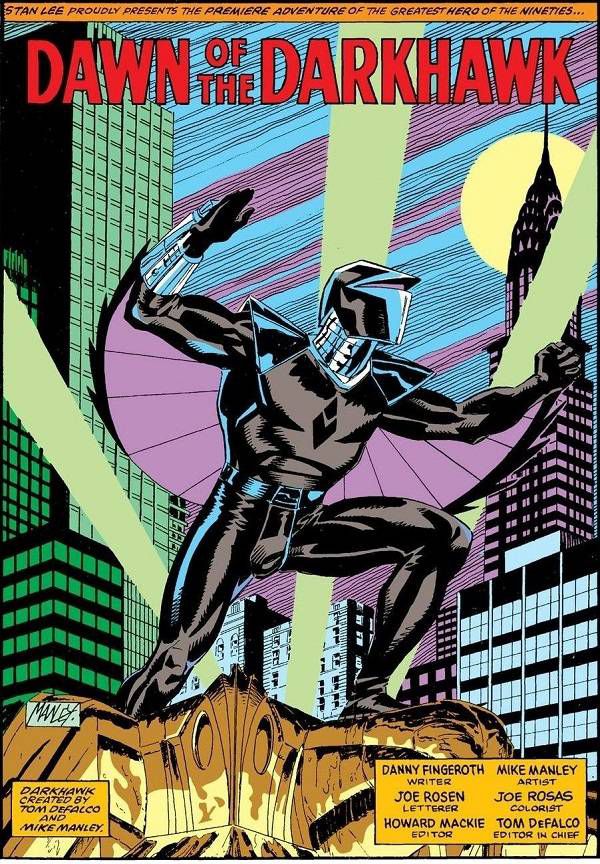 When I was a kid, there was one magic year where I loved Marvel’s Darkhawk. I was absolutely smitten. I bought his first five issues, I bought a six-part Amazing Spider-Man storyline where he guest-starred, and I even wrote and drew several issues of my own independent, never published, fan series titled Darkhawk & Friends where I had him team-up with other Marvel heroes. He was my jam in 1991.

It’s pretty easy to see why I was so enamoured. He had a pretty slick design. His wings had nifty points, his helmet looked like he could stab you with it, his neck looked like it was made of thick cables, and he had a wrist-mounted grappling hook / Wolverine-style claws. Better yet, he was just a teenager like I would be one day, Lord willing. He had relatable problems with his family and the weight of the world seemed to be on his shoulders. Darkhawk gained his powers unexpectedly, so many of those early issues dealt with him coming to terms with his new status quo and discovering the ins and outs of his powers.

Looking back with perspective, it’s clear Darkhawk was ripped straight from the teenager-with-problems-gains-superpowers playbook AKA the Spider-Man mold. 9-year-old me didn’t care. The mysteries of where Darkhawk’s powers came from, if his dad was as dirty a cop as it seems he was, and just what he looked like under that helmet of his had me enraptured. He was known on most title pages as “The Mysterious Darkhawk” and they delivered on that promise.

But kids are fickle. My attention wandered after the first five months of Darkhawk’s publication and I stopped asking my parents to buy it. However, the mysteries presented in those first few issues stayed with me. “What was Darkhawk’s deal?” I’d occasionally ask myself.

While Wikipedia was always there for me to check, that felt like cheating. Darkhawk and I had a real history. I had positive feelings for that weird helmeted guy with the grappling hook. To just read a few paragraphs of plot synopsis and backstory written by some third party felt dirty and disrespectful. I couldn’t do that to my old friend. It would be letting him down.

Just in the past year, I remembered that I’m now a 32-year-old man with a wife, a mortgage, and a full-time job. I’m allowed to spend money on things I want to spend money on. So, if I want to dive into old quarter bins and find most of the Darkhawk run, I could. If I wanted to go on various online comics sellers and fill out the rest of the run that way, the only person stopping me is me. So, that’s what I did. Over the course of a few months, I bought all 50 issues of Darkhawk’s titular series, his three annuals, and the handful of other issues his series crossed over with. I put them all in a little pile and thought, “That’s it. I’ve done it. One more item has been crossed off of you, bucket list!” Then, I actually started to read them.

Now, don’t get me wrong. They’re not bad, per say. It’s just that they’re not great either. The relationships between the Darkhawk and his family were fairly one-dimensional and the series spent a bit too much time with Darkhawk punching generic villains while more compelling storylines were being seeded for the future. I do give it credit for answering most of the questions posed in those first five issues I so loved. The payoffs were, sadly, a letdown. I’d been subconsciously crafting a crazy narrative in my head for 23 years involving clones and latent mutant powers and a little bit of plot cribbed from The Last Starfighter and other mindblowingly awesome things. What I got was some fine superheroing and a backstory that was fully capable though not completely understandable.

Could I really have expected anything else? Could reality have been better than a story I’ve been cooking up off-and-on for over two decades? Is it Darkhawk’s fault that the expectations of both a 9-year-old and a 32-year-old weren’t met? No, of course not. My love for Darkhawk had been an abstraction. The idea of him was wonderful. The reality of him was just okay. This revisit exposed my memories to the light of day where they proceeded to hiss and curse and want to run for cover.

And you know what? I’ll let them those memories get to cover. I’ll keep my original love for those first five issues burning in a little corner of my memory. Those were good comics reading years and just because these stories don’t resonate with me now, they were deeply meaningful to me then. There’s no reason to forget that even if circumstances are different now. Love what you love even if you only used to love it. Just make sure you’re not lying to yourself.

If you’ll excuse me, I have to go read this complete run of 1991’s Sleepwalker I also recently tracked down. I bet that will have held up exactly as I recall, right? Right? … Uh-oh.

The first nine issues of Darkhawk have been reprinted.