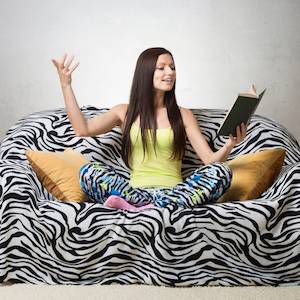 This week, I was reminded of my stepfather, who passed away almost three years ago.  I think about him at the most random moments of my day, like when I’m driving or seeing rabbits frolicking in my backyard. He loved to take long drives and feed the animals that made homes in our grass. But on this particular occasion, his image came to me as I thought about literature and how it brought us together. My stepfather was a bibliophile who had all the Sherlock Holmes books down in our basement. What I most recall before he became ill was how he was able to recite lines from Charles Dickens and Shakespeare at the dinner table. Sometimes this would go on for a half hour even though the old, impatient me would feel as if he was carrying on for eternity.

The recitations would annoy me because all I wanted to do was finish my grilled chicken and spinach so that I could run upstairs and go on the computer, but ironically, this is what brings me joy when reminiscing about him. Out of all the experiences that we shared, from museum exhibitions to dancing at wedding receptions, why did I retain this specific memory in my head, almost like a sacred keepsake? Is it because I’m a writer? I’d like to think the connection is deeper than that. I know that my stepfather always loved to entertain my mother and me, but why blurt out lines from famous works? My younger self thought that this activity was old-fashioned and rather obsolete. After all, we weren’t living in ancient Greece. We definitely weren’t neanderthals, either. But now I am reassessing everything with a different lens. I begin to wonder: what does recitation mean to us in the age of ebooks, digital media, social media, and an infinite number of apps?

As I’m sure you already know, oral storytelling is ancient (as you can see from the picture above). This was a cultural activity in which people would crowd around the storyteller in order to be entertained, informed, or persuaded. Generally, the attendees would sit next to one another in a circle and this intimacy allowed for the storyteller to have much freedom in how he or she could reorient a story depending on the audience and its reactions to a story’s development. Not only was this past time a cultural function, but also a psychosocial one. Because the storyteller and listeners were in physical proximity to one another, this translated into psychological proximity. Both parties could be on one accord with one another as the story progressed.

But what I didn’t know was that oral storytelling is as old as language itself. Life is absurd as much as it is exciting, and storytelling was a way in which people could place their lives into the narrative form in order to provide some type of security or assurance to a listener. Other times, a person may tell a story in order to “grant” immortality to the subject of the tale, a metaphorical way to subvert Death. Some of the greatest stories of mankind were originally spoken, not written, such as The Epic of Gilgamesh and The Iliad and The Odyssey. Even when languages were developed into writing systems, you can still hear people reciting lines of Hamlet or sonnets from Pablo Neruda because there was something about those words that struck a chord in their hearts, something that bonded them to the writers. When we recite those lines to someone else, we inadvertently enhance them with certain cultural components that comprise our identity, whether they are emphatic hand gestures, facial expressions, or certain inflections.

To be honest, I still can’t pinpoint the beauty of recitation because when I see it being done, I am always left speechless. I can see a storyteller enshrouding his or herself with the character that the writer depicted, but not being possessed by the embodiment. There is this inexplicably perfect balance between maintaining one’s uniqueness while taking on someone else’s art. Perhaps this is what is great about literature and art in general–these invisible ties and bonds keep communication afloat and voices multiplied.

As for me, if I close my eyes, I can still hear my stepfather’s voice when he regales me with certain passages from Frankenstein. He may not be physically here with me but he’s still present. Those recitations insured that, metaphysically, he would always be by my side.