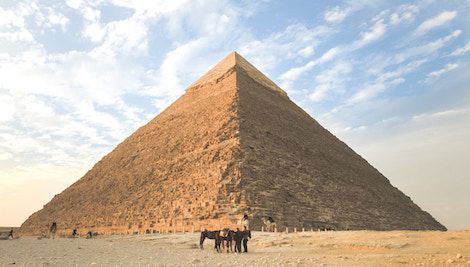 “Does anyone want to participate in a book exchange?”

A Facebook friend recently posted this message on her page. My reaction, as someone who loves everything about exchanging books, was instantaneous: “YES!”

The details came through, and immediately it was clear: this was a pyramid exchange. Well. Okay. The instructions employed cheekily self-effacing terms like “evil scheme” to convey the lack of a guarantee here. Those warnings are important and necessary.

With these exhanges, everyone participating should know: you probably will not get anything back. I repeat: you will probably send a book off to a stranger and get no books in the mail yourself. Know that up front. Choose to care about that, and don’t participate; or choose not to mind that “risk,” and proceed.

That, of course, relies on everyone who responds actually sending a book and passing it on, and I wouldn’t bet much on that—or anything, really. I sent off a used book in the mail, but I wouldn’t call that expense a “bet”; it was a discretionary output, no more, no less. Impulsive, non-hurtful, negligible, and unmissed. That’s how you have to go in to these exchanges, or it really is not worth it.

Even knowing this, I’ve done the pyramid book exchange before, and I have not been disappointed. By “not disappointed,” I do not mean that I received 26 books or 36 books or whatever the inflated number is that’s currently attached to the letter circulating among your reader friends. I did not. I never expected to. I got one book in the mail—IQ84—and was thrilled and delighted, because it was not a book I would have gotten for myself, but I’d been wanting to read it, and it appeared in my mailbox like magic, and also: I GOT A FREE BOOK IN THE MAIL! YAY!

So I said “yes” again. I sent a used copy of Sleeping Giants off to the OP’s friend; I don’t know her or her tastes, but I think this book is fun. Best case scenario, she’ll think so, too.

Here’s how I “rationalized” letting myself get “schemed” this way: participating is monetarily equal to leaving a book that you’re done with at the bar or on a bus bench for an unknown person to stumble upon. It is monetarily equal to sticking a title in a Little Free Library when you’re done, or to donating it to your local library. If I was swindled, I was swindled out of something that I regularly give away anyway.

Approaching pyramid exchanges as an “investment,” or presenting them that way, is where the ethical arguments against them come in. But even then, the cost here is more akin to buying a lottery ticket than it is to handing your life savings over to the person from high school who swears that she made it rich on revolutionary plastique kitchen utensils and that YOU CAN TOO. We book pyramiders are not doing the same kind of “scheming” as those who hawk expensive starter kits for super cool leggings businesses (“THEY’RE FLATTERING ON EVERYONE! Merp.”).

If you’re thinking of this book exchange in terms of cost: the best case scenario would be that you get books from participants down the line in return. You may or probably will not, and that’s the gamble, I suppose. But if you’re thinking of the exchange in terms of sending books you love to strangers: the best case really may be that the person who you sent your one book to loves it.

So, in my humble opinion, passing information about this bookish pyramid exchange on does not inject “morally corrupt” scheminess into the world.

Others disagree. Oh, boy, do they. Comments appeared in connected posts that were very critical of the pyramid-nature of the exchange, and that linked to the piece linked above: it’s a scam! It’s deceptive! It’s immoral! It’s coming for your innocence! You are being swindled and have become a swindler of swindlees!

Y’all: no. I swear. That’s not what’s up here. At its core: this exchange is just about sharing a book.

It may be the case that the introductory text attached to this particular pyramid exchange needs some editing, both in terms of clarifying the purpose and of taking out anything that could be construed as a promise or a guarantee. Maybe it should not even winkingly suggest that people will get multitudes of books in return.

The letter should perhaps clarify that anyone who’s not okay with maybe getting nothing back should not participate at all. It’s not worth it if you’re going to feel cheated out of the high number of books that only the originators of the exchange are likely to receive.

But—and I keep coming back to this, and I don’t think it’s just because I favor Fake Eleanor on The Good Place—it’s still just sending off one book. It’s $4! It’s sharing something you love with a stranger! How is that being swindled?! It is not.

This isn’t a gateway exchange; you aren’t going to leap from mailing your favorite title off to a stranger into dumping your bank account into a Ponzi scheme. This book exchange isn’t incapacitating your bullshit detector. No devious charlatans and tricksters and cheats are waiting in the wings to see which poor saps fall for it so that they can bilk them of their life savings.

(I’m somewhat more concerned about the safety of sharing your address with an unknown number of strangers, but that is perhaps a topic for another piece, or a good argument against spending hours watching Lifetime movies, with their full-bodied cautions against ever trusting anyone, in any way.)

This exchange, all ways that I’ve considered it, is not that big of a deal. And while a 1-to-1 exchange would be more “fair,” and more likely to actually “get” you something in return: um. So? It also sounds less fun.

This is like a chain letter, a white elephant gift exchange, participating in Secret Santa, and book fairying. It is less expensive than buying everyone in the office a coffee on the way in just to brighten their day. It is good bookish karma. It is playful, non-malicious, and readerly.

Do I sound defensive? Maybe I am. Participating in the book exchange this time was the bit of silly fun I made room for in my week, and now it’s been ruined by people who read too much Kant for their own stinking good. Can’t we just have something nice and fun and innocent among friends, and friends of friends, without first investigating the numerical likelihood of that fun being returned?

We book exchangers are not criminal masterminds, and we are not trying to ruin lives: we are just readers who are probably all secretly delighting in the idea of someone loving our favorite titles, too, much more than we are waiting by our mailboxes in anticipation.

So when that letter comes into your feed, do us all a favor:

1) If you think it is an ethical abyss, don’t participate. Please do this quietly.

2) if you want to send a stranger a book that you love, do.