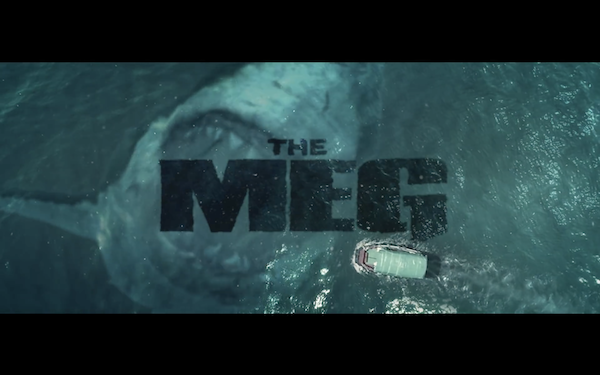 The bad news: The Meg

I don’t know why the studio felt the need to add an article in front of the title of Steve Alten’s 1997 “Jaws meets Jurassic Park” schlockfest Meg: A Novel of Deep Terror. But there we are.

Beyond the atrocious title (maybe they were afraid people were going to mistake it for a biopic of Meg Ryan?), the movie (which has been in production hell for the better part of a decade) seems to be hitting all the right horror notes from Alten’s debut novel. There are the early encounters with the megalodon at the bottom of the Pacific Ocean, followed by Dr. Taylor (played by Statham) doing his grumbly best to track and kill the largest shark to ever ply the ocean’s waters. It even looks like the baseball scene is in there. In the book, that scene had me practically screaming and I can’t wait to see it committed to (horrifying) film.

Here’s hoping that the movie can strike that balance between creeping horror and personal tension that made the book such a page turner. After all, when you can avoid the villain by simply stepping out of the water, there needs to be major investment from your protagonist to get back out there.

There will be plenty of Jaws comparisons, and that’s expected and welcome, but Meg has its own distinct kink. There’s enough paleontological analysis to engage a generation that grew up with fond memories of T-Rexes chasing after a Jeep, while still tapping into that horror that the ocean is fun…and full of things that want to devour you.

Meg will be released on August 10 of this year. Just in time to make you think twice about heading into the water for one last dip. In the meantime, grab Alten’s book. There’s an author-revised edition out now and it’s the perfect summertime read.

Just maybe not for the beach.