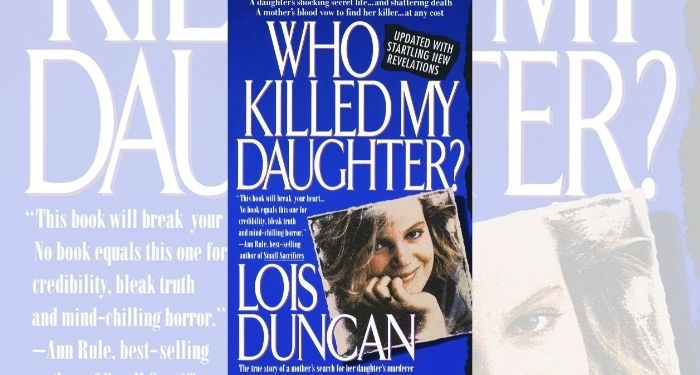 Lois Duncan, known for her young adult thrillers of the 1970s and early ’80s, including I Know What You Did Last Summer, Killing Mr. Griffin, and Stranger With My Face, quit writing books of that ilk after her daughter Kaitlyn Arquette was brutally murdered in 1989. She found herself unable to write, and instead focused on what may have happened to Kaitlyn.

Kaitlyn was 18 when she was shot in Albuquerque, New Mexico, in 1989. Many at first believed the person responsible was Kaitlyn’s boyfriend, but a series of investigations cleared him of the crime. Duncan, desperate for closure and with her own knowledge of crime from her career, became deeply invested in solving the case. She utilized the help of detective psychics as she became more and more distrustful of the messy work being done by police.

Duncan wrote two books covering the crime, including Who Killed My Daughter? in 1992 and One To The Wolves in 2013.

Unsolved Mysteries, the popular 1990s true crime television show, profiled on the story and botched investigations January 27, 1993. Further, in 2014, more updated details of the murder and investigation were explored in this investigative piece at Buzzfeed.

This week, over 30 years after the murder, one of the lead suspects identified by a private detective hired by Duncan was arrested, confessing to the crime.

Paul Apodaca, 53, confessed to the murder of Kaitlyn Arquette, as well as a string of other crimes throughout Albuquerque at the time. All of the incidents involved young women, and Apodaca has been quoted as saying they were driven by “was all the hatred that I had for women.”

Apodaca hasn’t been charged in the crime yet, though he has been charged with another high-profile murder that happened weeks prior to Arquette’s. This charge led to his confession, though police aren’t yet speaking to whether or not he’ll see charges related to Arquette’s death.

Despite being one of the first people at the scene of the crime in the moments after it happened, police never questioned Apodaca. His information was taken down, but no reports were run. This was one of the many errors Duncan believed the investigators made, which led her to seeking out private help.

“It’s hard to share a lot of information, even with the family until the case is charged, even if it’s 32–33 years old,” said Kyle Hartsock, deputy commander of APD’s Criminal Investigations Division, according to Albuquerque’s KRQE News. “As we’re moving around and wanting to interview people again, we try to not have someone else get to them first, but (the family is) definitely aware of it, they know of the updates, they know this case [the murder of Althea Oakley] is being charged first.”

Duncan died in the summer of 2016, the case unsolved. She and her family continued to seek out any leads they could. Though she isn’t alive to see a potential resolution, it was Duncan’s unyielding determination which pointed to Apadaco from early on.

Kerry Arquette, Kaitlyn’s older sister, said she and her family are grateful for a confession to the case. They remain frustrated and without answers to other questions, though, about how the case was so botched by police at the time.

“This is one of the things that breaks our hearts — this man was at the crime scene with the cops,” she said in a phone interview with the Albuquerque Journal. “How obvious did it need to be to look into this guy? They just let him walk away.”

“This confession is just a start,” she told the Journal. “The family has innumerable questions — the whys and the hows, and a lot of blanks to be filled in before we can sit back and think that justice has been served. It’s been too many years since we’ve been trying to fill in those blanks by ourselves.”

While Duncan never got to truly enjoy the highest successes of her writing career — adaptations of her beloved young adult thrillers and potentially dozens more popular thrillers, as well as honors like being named a Margaret A. Edwards award winner for her lasting contributions to teen literature and the Grand Master award from the Mystery Writers of America — certainly, her dedication to resolving her daughter’s death lead to this moment. Her work, in conjunction with new tools of criminal investigation, will only help others looking for answers to tragic loss pursue them. In many ways, this cold case echos through others in recent memory, including Michelle McNamara’s work to uncover the Golden State Killer, as pieced together in I’ll Be Gone in the Dark.

Apadaco remains in custody and prosecutors are asking him to be held until his trial for the murder of Oakley.