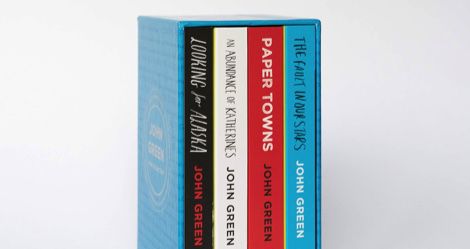 Penguin’s mini books by John Green might be the start of something new in the English-speaking world. The publishing company has chosen to reprint four of John Green’s books in a new format: as mini books called “Dwarsliggers.” Is this the next big thing in reading? 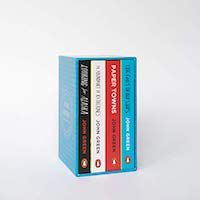 The correct name for these tiny volumes is “Dwarsliggers.” If you think that sounds like a word from a fairytale, wait till you hear the rest of the story! The Netherlands has had mini books for a while now. Ten years ago, a Dutch publishing company called Royal Jongbloed invented the “Dwarsligger,” which means “lying crossways.” When you open the book in a landscape orientation (instead of portrait, like most books), the words go from top to bottom. It makes one regular-sized page instead of two tiny ones.

But Royal Jongbloed was super smart. “Dwarsligger” is also an idiom for someone who’s a trouble-maker, “lying crossways” on the paths of other people. It lends a kind of maverick edge to these mini books. Just by reading one you’re saying, I’m not like other people. I read *my* books at a 90-degree angle from everyone else’s.

If this already sounds unbearably hipster (or “twee,” as The New Yorker is calling it), keep reading. The mini books are made of extra-thin paper since they have at least twice as many pages as a regular-sized volume. There is only one paper mill in the world that makes paper thin enough and yet still durable, and it’s in a tiny village in Finland. Because why wouldn’t it be. 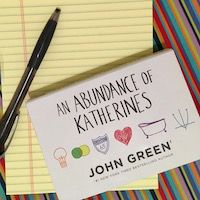 The fact that this all sounds like something John Green made up might be why Penguin chose his books to be the first Dwarsliggers in English. They’ve published four, to start: Looking for Alaska, An Abundance of Katherines, Paper Towns, and The Fault in Our Stars.

I already have a boring, normal-size copy of The Fault in Our Stars (which I *love*). So, after some deliberation over the other three books, I chose to buy An Abundance of Katherines in mini-book format. I enjoyed the creativity of the story (but let me just say that Colin Singleton is no Augustus Waters).

John Green was right when he told the New York Times: “They’re objects that you almost can’t get until you’re touching them.” I couldn’t imagine exactly what a Dwarsligger would look like until I had one. I was not disappointed. 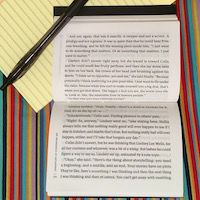 My favourite feature is that you can lay the book completely flat without breaking or even bending the spine. This comes in very handy for reading whilst, say, eating (something I do frequently). You can eat with one hand and hold the book with the other. Or, if your eating requires two hands, you can balance something on the book to keep it flat. Unlike a chunky paperback, it won’t attempt to spring closed on you.

My least favourite feature was the extra-special Finnish onion-skin paper. It’s very pretty, and I don’t think the books would work if the paper were thicker. But it’s hard to flick through pages to find your place. You can hold the mini book in one hand, yes. But when it comes to turning the page, you need to momentarily switch hands while you moisten your index finger so that it can separate one super-thin page from the next. I like the recycled, made-in-a-regular-paper-mill feel of paperback pages. I like being able to flip roughly through them and not worry that their edges are going to curl.

That said, I also really appreciate how light the mini books are. As someone who carries around a lot of books to a lot of places, this could be a game-changer.

And they look all cute next to the grown-up books! If Penguin decides to make more Dwarsliggers, I’m definitely interested.

What about you? Have you tried out one of the John Green mini books? Let us know what you think!