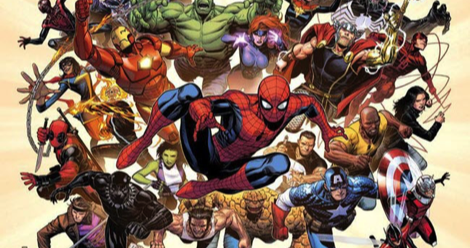 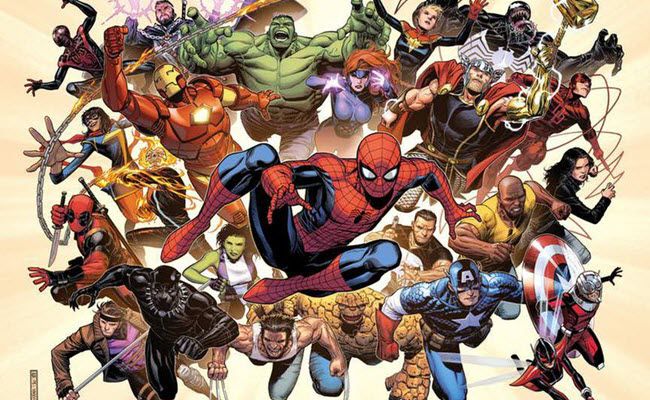 If you’re a Marvel fan, you’ve been staring at the above image for a few days now, trying to figure out just what, exactly, Marvel is trying to accomplish with its “Fresh Start” initiative. While a lot of us have keyed in on the dearth of diversity among this new line-up, it’s not the first time that Marvel has thrown its readers a curveball.

Annual crossover events have been happening in comics since the Golden Age, but they don’t always result in the reshuffling of titles. In fact, ditching their entire line-up and starting from scratch has only become an annual tradition since 2015 in the House that Stan Built. That’s not to say they didn’t make forays into sea changes earlier, though. 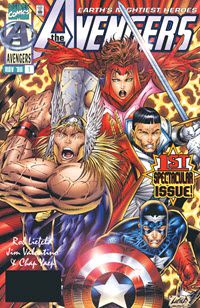 After dying in the final battle of the Onslaught event, a handful of classic heroes—Iron Man, Thor, Captain America, Hulk, and, most importantly, The Fantastic Four—were transported to a pocket universe created by Franklin Richards (Sue & Reed’s occasionally omnipotent offspring). Marvel rebooted the Avengers, Iron Man, Captain America, Fantastic Four, and Thor titles, giving them to Jim Lee and Rob Liefeld (who never met a foot he could actually draw)—both former Marvel employees who had left to start their own studios. Liefeld only lasted two issues before Walt Simonson at Wildstorm took over. All the artists used the one-year-run to reimagine old plot lines, modernizing origins, updating costumes, and generally playing around with characters unfettered by generations of backstory. It was well received…and then promptly undone as Franklin shoved everyone back into good ol’ Earth 616 in Heroes Reborn: Return. 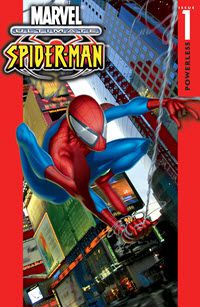 Is a reboot a reboot if the entire universe that you’re rebooting from stays put? Rather than go through a grand wipe of the standard 616 universe, Marvel hired a little known indie writer, Brian Michael Bendis (yes, that Bendis), to anchor a whole new retelling of Spider-Man, with its roots in modern times, unencumbered by the sixty years of continuity that propped up the wheatcake-lovin’ superhero. After the explosive success of Ultimate Spider-Man, Mark Millar was handed the keys to reimagining the X-Men and Avengers (rebranded as The Ultimates), the latter of which would end up informing much of the nascent Marvel Cinematic Universe (Samuel L. Jackson as Nick Fury, anyone?). The Ultimate Universe was a runaway success (and, honestly, what got me back into reading Marvel comics as an adult). Bendis and Millar crafted engaging, cinematic stories that were inspired by modern life rather than decades of convoluted character history. Even if they did use effing Greg Land on Ultimate Fantastic Four, its ten-year-run is one of the most successful and impactful reboots in Marvel’s history. 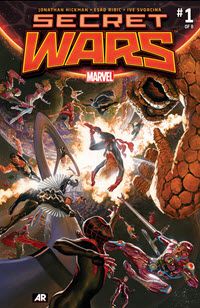 In which the entire Marvel Universe went under the knife. By 2015, Marvel had a brand-new kind of continuity problem. The success of the Ultimate Universe had inspired other one-shot universes such as 1602 (which, y’know, takes place in 1602), Marvel 2099 (go on, guess), Marvel Zombies, Squadron Supreme, and more. In a “No more Multiverses” proclamation that would make Scarlet Witch proud, the powers that be decided to literally mash Earth 616 with the Ultimate Universe, leading to their mutual destruction. Saving them both, at least partially, was none other than Baron von Doom. With the launch of Secret Wars, Marvel grabbed hold of all their various side-titles, tossed them in a bag, and shook vigorously. The resultant comics, part of the Battleworld event, were a mix of old 616 heroes and villains, escapees from newer offshoot realities (like Old Man Logan), as well as new and forgotten characters alike (like Singularity and America Chavez in A-Force). But Secret Wars and Battleworld, despite Marvel assuring us they were the new status quo, were never meant to be anything but a stepping stone that led to the… 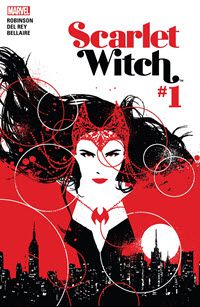 After Doom was defeated(?) and Secret Wars came to an end, Marvel went a little nutso, launching 60–65 titles in a one-year period. From fan favorites like Spider-Gwen and Ms. Marvel to unexpected new titles like the absolutely stunning Scarlet Witch to old standards like Captain America (even if it was Sam Wilson carrying the shield). All-New, All-Different was an experiment to see how new and diverse characters could handle their own titles. The problem was, unless you had a Marvel Unlimited subscription, it was practically impossible to keep up with everything being published. Many titles disappeared after a single storyline, never to be seen again due to “poor numbers.” But in reality, people gravitated to what they knew best, because it was easiest to find. After all, the X-Men weren’t going anywhere (though they did have to hide out in Limbo for a while), and neither was Iron Man (well, maybe not Iron Man). We barely had time to get a feel for these new characters before they were snatched out of our hands and shoved back in the toy box. That’s because right around the corner was, you guessed it, another universe-wide reboot. 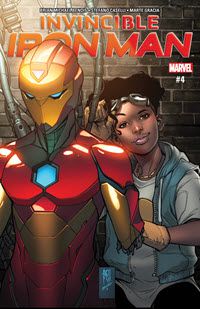 YOU get a new #1 title! And YOU get a new #1 title! And YOU…! Yup, at the end of their yearlong experiment with shotgun publishing, Marvel pulled the trigger on both barrels again, launching and renumbering nearly three dozen titles in the wake of Civil War II. Thankfully, some of the diversity we saw as a breath of fresh air in All-New, All-Different was preserved, with Kamala Khan sticking around as Ms. Marvel, and a new woman of color taking up the mantle as Iron Man (or Ironheart, as she ends up calling herself), plus the best Hawkeye (not Hawkguy) and Asian-American supergenius Amadeus Cho taking up the mantle of Hulk. But again, there were a number of new titles thrown into the mix that had even the Marvel faithful scratching their heads (did we really need solo comics for every one of Deadpool’s mercenary crew)? And just as they hit their stride and we started to figure out where they fit in the New Marvel Order (which will totally be the name of the 2019 reboot, calling it now), they were gone and replaced by something totally new. 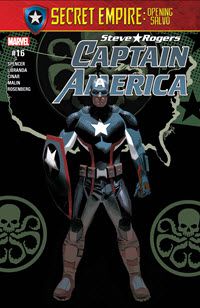 Or, in the case of Legacy, something old. In a tried, but true move, Marvel announced it was randomly returning to “classic” numbering, with titles like Amazing Spider-Man suddenly reverting to issue #789. Because there’s nothing better for new fans getting into comics than having to figure out where in the hell the story for their favorite hero actually begins. Focusing on the heroes and villains that had historically performed the best for the brand, Legacy still had a fair amount of representation from characters like Miles Morales, Gwenpool, Luke Cage, and Moon Girl. Plus, titles like Wolverine and Thor were still helmed by female counterparts to the traditionally male heroes. On the flip side, though, Cap’s a Nazi now. Always has been actually. No big, right? In fact, it’s the Secret Empire event that left Marvel fans gasping for a change because, I’m not going to lie, Nazi Cap was a big, hot mess splattered on a NYC sidewalk in June. Marvel lost readership as those unhappy with the retcon (cosmic cube driven or otherwise) decided not to stick around and see where things ended up. They also gained readership from those who were excited that Cap was a Nazi now? I’m pretty sure that wasn’t what the Bullpen was shooting for. At any rate, things needed to change, so why not ditch that old numbering once more? 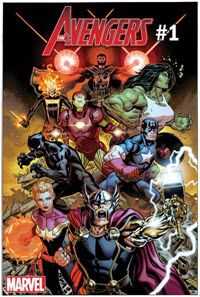 Which brings us to Fresh Start where Marvel, in an about-face that’s truly devoid of any self-awareness, is going to cull titles and start them all at #1…again. Details are still pretty sparse, but judging by the titles announced (Iron Man, Avengers, and Hulk), the focus of this reboot will be those characters we’ve been seeing on the big and small screen for the past 10 years. Unfortunately, it seems that the price we have to pay for a more MCU-focused comic universe is a loss of diverse fan favorite titles like America, Iceman, and Unstoppable Wasp. Even Amadeus Cho is getting booted for the “I’m not dead yet, I’m feeling better, I think I’ll go for a walk” Bruce Banner in Hulk. I’m sure Marvel will cite “readership numbers” as their ultimate excuse for straightening and lightening the Marvel comic universe, but it’s a lost opportunity to capture new waves of fans. There’s a reason people are excited about movies like Black Panther and it’s because, except for a few instances, our fiction doesn’t reflect our reality. If Marvel caters only to a myopic group of intolerant readers, they’ll see their numbers continue to dwindle.

Other publishers get it. I’m seeing more female heroes. I look at other big imprints and I’m seeing more characters of color. More queerness! More…life. Limiting your palate limits the kind of stories you can tell and invites staleness and predictability. I would love to see Marvel stop all the renumbering and rebooting and simply focus on the world around them, then adjust their comics accordingly.