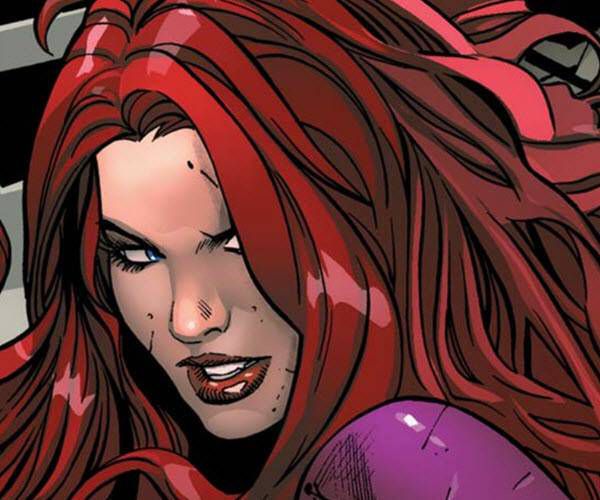 This is a guest post from Anthony Karcz. Anthony has spent the entirety of his adult life being a professional geek, obsessing over superheroes, transforming robots, galaxies far, far away, and always keeping a careful side-eye on his many (many) gadgets, lest they gain sentience. When he’s not busy raising his two amazing geeklets (having his daughter properly identify Dr. Strange at age 3 was one of his proudest moments), or providing sub-par craft work for his wife’s classroom, he can be found writing about games and hobbies for GeekDad.com and the latest technology and gadgets for Forbes.com. He currently resides in FL, where the perpetual 99% humidity practically necessitates a digital fiction collection. Follow him on Twitter @sunstreaker84.

I’m perpetually six months behind on my Marvel comics.

As a Marvel Unlimited subscriber (the greatest digital comic subscription service in the ‘verse), I’m subject to a Marvel-imposed 6-month buffer and have to tamp down my “piddle-on-the-carpet” excitement about the latest comic events. The plus side of that is, when the initial issue of an event does end up in my weekly feed, I get to get excited all over again.

So I was doing my happy dance this week when I realized that, not only did I have an issue of the Monsters Unleashed event in my new comics, I had missed the first issue and could read them both back-to-back! Monsters Unleashed is an homage to the old 1973 Marvel comic series that featured the random Frankenstein’s monster, Werewolf, Dracula, and other classic movie monster characters that inexplicably found themselves in the comic book world. For the 2017 series, though, it’s all-kaiju, all the time. As a Godzilla fan, nothing could make me happier (well, except for repeat readings of James Stokoe’s Godzilla: Half Century War, but I digress).

I settled in, my daughter beside me with her latest graphic novel (Awkward by Svetlana Chmakova) and me with my MU app, and prepared to thrill to the adventures of all the giant monsters stomping around the Marvel Universe.

The first issue was fun and was full of the kind of full-page spreads that I expected from an event that dealt with monsters that are taller than skyscrapers. And it delivered the world-breaking peril I expected (with some bonus sideline commentary from Moon Girl and Devil Dinosaur – the greatest science duo in comics). But something felt off. I powered through and opened the next issue.

There, seven pages in, I saw it. The face that launched a thousand flung comics. The panel that sent a million Marvel fans to their keyboards to rail at the company. The singular panel that tells the reader “yeah, we phoned this shit in.”

It was the Greg Land “I traced this model looking over her shoulder all sexy-like” face.

As I quickly scrubbed backwards through the comic to confirm, I saw what my brain had been protecting me from by focusing on the (admittedly well-drawn) giant monsters. There was the “open-mouth yelling” girl. There was “the one African American dude I traced.” There was “Kurt Russell screaming Google Image result #1.” I felt betrayed.

Greg Land has been a barnacle on the ass of Marvel for decades now because, as far as I can tell, he has a large audience dedicated to the type of plastic, expressionless, traced-from-a-dirty-mag-or-fashion-ad-or-movie-poster art that he pumps out. What’s frustrating is that he’s decent when he’s original. His kaiju in Monsters Unleashed are full of the kind of Cthulu-esque mind-fuckery this series needs. But his heroes (and humans in general) are awful. If you’ve seen one of his comics, you’ve seen all of them. Land recycles the same traced faces over and over. The dudes are all stoic and close-mouthed (or screaming maniacally). The woman are all sultry or in the throes of orgasmic passion. Because Land only traces photos from popular magazines or porn, where sexism is alive and well, thankyouverymuch. 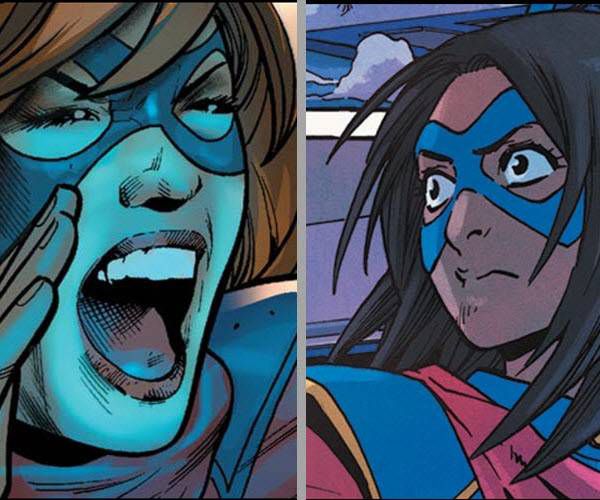 The above image is a perfect example of what it looks like when Land applies a Ms. Marvel costume to his standard “screaming woman” image. Compare that to the image of Ms. Marvel from Nico Leon, the artist who first drew her. I have more examples, but, frankly, the list is exhaustive. It’s easier to point you to the amazing side-by-side comparisons of where this rip-off artist gets his source material; https://fuck-no-greg-land.tumblr.com is a good place to start.

I can’t enjoy a series once I realize Land is involved. There’s no nuance to his art. There’s no art to his art. Even those kaiju I’d initially appreciated were immediately recycled into the Land-canon and spit back out in the background. He’s not creating art. He’s cutting and pasting a library of images into a comic panel layout. It’s lazy, insulting to the reader, and poisonous for any writer that gets saddled with this albatross.

Greg Land is representative of the worst side of Marvel – the cash-grab, crossover summer event Marvel. He’s shoved onto a title when Marvel wants returns but doesn’t want to have to invest time massaging a creative team. Greg Land is an executive’s idea of a “good artist” because they don’t have to think too hard to understand it (I assume most, if not all of these same people, would run screaming from James Stokoe’s Godzilla series). 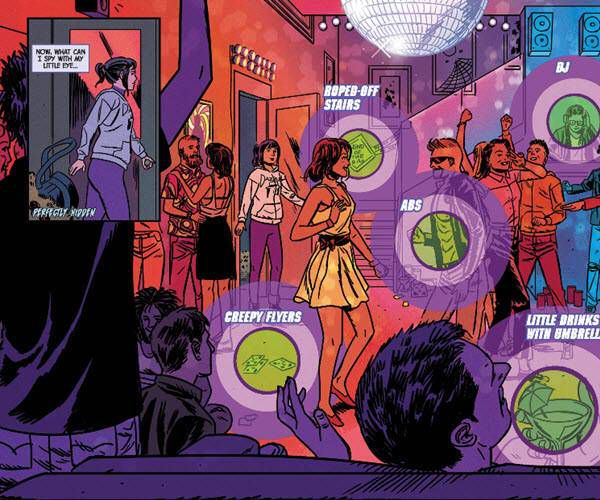 Contrast this with the excellent Hawkeye series written by Kelly Thompson and penciled by Leonardo Romero. It’s witty, evocative, and atmospheric. Chances are taken with the art because Romero is working with Thompson, experimenting with how to best tell Kate’s story. It’s art that has a purpose, where it’s a bit rough around the edges here and there because that’s what the scene called for. That’s the kind of comic that represents the best side of Marvel and the side they should be trying to cultivate.

That’s the kind of Marvel I want to “Make Mine.”