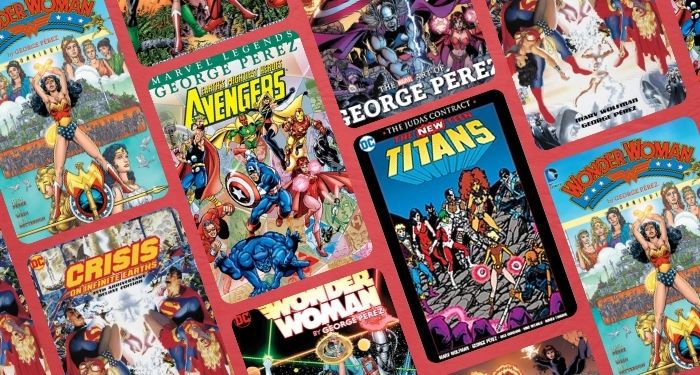 On December 7 of last year, I logged into Twitter and learned that comic book creator George Pérez — known for his groundbreaking work on Crisis on Infinite Earths, New Teen Titans, and The Avengers, to name a few — had been diagnosed with terminal cancer. His health had been declining for a few years, including vision problems that led to his retirement, but this still hit me hard.

I never know how to react to news like this. Do I offer condolences and good thoughts to him and his family? That doesn’t seem like enough (though I certainly wish them peace and strength). Do I list all of the amazing things Mr. Pérez achieved throughout his career, from revitalizing the Teen Titans to co-creating event comics as we know them to imbuing each of his characters with distinctive, unique features — such a rare quality in a world of generic, square-jawed heroes? Lots of people could do that (and probably have, with much more expertise than I could).

So instead, I’d like to tell you a story.

I don’t remember the first Pérez comic I ever read. It was probably the collected edition of the Judas Contract storyline from New Teen Titans, which I still have and adore. What I do remember is my first trip to a comic book store.

I was a college freshman enrolled in a writing course focused on superheroes. One of our first assignments was to buy four issues of any comic book series we wanted so that we could analyze them throughout the semester. (This was an honors course, too. See what happens when you study hard, kids? You, too, can begin your college career by reading comics.)

Long story short, I walked out of the store with two four-part miniseries. The first was Tales of the New Teen Titans by Marv Wolfman and, yep, George Pérez. I love me some Titans, and this miniseries promised to provide the origin stories of the then-newest members of the team — Cyborg, Starfire, Raven, and Changeling/Beast Boy, all Pérez co-creations — for the very first time.

The second was Batman: Year Three. It’s not the kind of thing I normally would have picked up, but those Pérez covers! Oh, they sucked me right in…or should I say “suckered.” The interior art was done by, shall we say, someone who definitely was not Pérez, a fact I did not realize until I opened the first issue. My disappointment could be felt for miles.

Since then, I have read many, many more comics, yet Pérez remains my favorite artist. Every series I read gave me more reasons to love his work. (The Scarlet Witch’s hair never looked better than when drawn by Pérez, and that is a FACT.) I’m not the type of reader who buys a book solely on name recognition, but if I see Pérez’s name on something, I think, “Yes! This is going to kick ass!” And then it does.

Some of my reasons for loving Pérez’s work are obvious: he has a clear personal style and got really creative with page layouts and character designs in some of Marvel and DC’s most iconic books. He even wrote some of them, because clearly being a talented artist was not enough.

Other reasons are more personal. I have a special love for the characters he worked on (and in fact, his contributions may have helped to build that love in an ouroboros of admiration). As a Mexican American, I always get a little thrill at seeing a fellow Latine make it big in comics and knowing there are other Latine superhero fans out there. And in his run on Wonder Woman, two of the supporting characters are teen friends named Vanessa and Eileen. My name is Eileen, and my best friend growing up was named Vanessa, so that always gets a smile out of me, which makes this the silliest reason I have for appreciating any artist.

(If you’re reading this, you probably have your own mix of personal and aesthetic reasons for enjoying Pérez’s work. Both are special, but I think it’s the personal reasons that allow us to connect so strongly with particular comics…and that make moments like this extra hard for fans to deal with.)

Wonder Woman is as good a place as any to end this article. Specifically, Wonder Woman #46, which Pérez wrote but did not draw. It’s an unconventional story: Vanessa’s friend Lucy dies by suicide, leaving everyone to inevitably wonder why she did it and if they could have done something to help her. It’s a raw, harrowing look at depression and grief that I can never get through dry-eyed.

But in the midst of the grief, there are splashes of hope. Despite the characters’ own pain, they all reach out to comfort others. Together, they are strong enough to endure the tough days. And together, they will move forward, keeping the memory of their loved one close for all time.