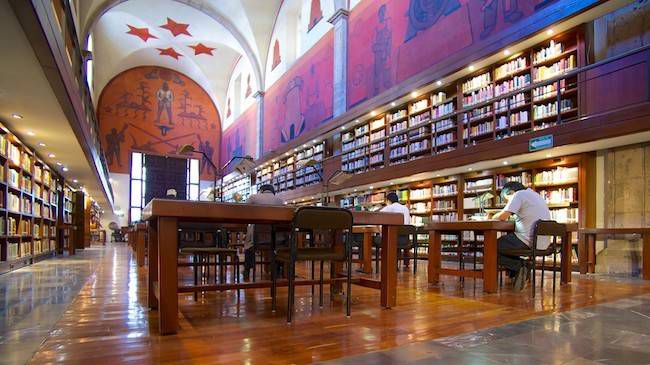 When people consider Mexico as a travel destination, they seem to focus mostly on its natural beauty – beaches, mountains, and jungles – and the history, particularly the Aztec and Mayan ruins. Having spent a fair amount of time exploring those very features (except the jungles), I can understand their appeal. There’s some pretty good food out there, too.  But that’s not all there is. If you’re looking to give a bookish flavor to your next Mexican vacation, here are just a few of the places you’ll want to visit.

For almost 30 years, the International Festival of the Book, hosted by the University of Guadalajara, has been the largest and most important book festival in Latin America.  It is different from other major book festivals in that includes both industry professionals and the general public.  The festival lasts 9 days, and it attracts visitors from around the world.  Books are the center of the festival, but the city is filled with movies and music and other cultural pursuits. This year, the festival starts November 28 and runs through December 6. This festival is a big enough deal that it could be a bookish vacation all in itself.

Located at the University of Guadalajara, this library is named in honor of Mexico’s only Nobel Prize winning author, Octavio Paz. The library’s primary goal is to compile and collect the “intellectual production” of Spain, Portugal, and all of Latin America. The collection has more than tripled since the library opened in 1991. The library is open to the public, and it hosts a variety of exhibitions and installations. Housed inside a former chapel, the it is also home to a mural by famed artist David Alfaro Siqueiros and local painter Amado de la Cueva.

Sor Juana Inés de la Cruz served as the starting point for Mexican literature in the Spanish language.  She was a nun and a self-taught scholar, and because of her usage of the Spanish language, though she was born in and lived in the New World, she is considered an important figure in the literary history of both Spain and Mexico.  She was a poet and a feminist, long before there was such a word.  The convent where she lived the last 27 years of her life, and where she completed much of her writing, now serves as a university named in her honor, and people can tour the grounds, visiting the ruins of older buildings that no longer stand and learning about the contribution this poet made to the cultural history of the nation.  That contribution is also recognized at the government level by her appearance on the 200 peso note.

The National Library of Mexico can be found on the campus of UNAM, the National Autonomous University of Mexico, where is was originally founded in the early 1800s. If there’s a book written by a Mexican or written about Mexico anywhere in the world, you can (or will eventually) find it on these shelves. The majority of the library services are available to the public, and tours of the facility are available. A special collection, the Reserves, are only available to researchers and includes rare and valuable works, historical documents, and the library’s original collection. It’s current home was built in 1979, and then repaired following damage from a 1985 earthquake.  (Edit:  Pictured above is the Central Library of UNAM. The murals on the outside of the building are the work of famed artist Juan O’Gorman.)

You may have noticed that there are no bookstores on the list.  That doesn’t mean that they aren’t there. There are several that I stumbled across as I traveled. The thing about buying books in Mexico is that books are expensive.  They are beautifully made paperbacks, with cover flaps, and they easily run the same price, if not more, than a US hardback. I’ve found that it is sometimes easier and less expensive to buy books from vendors on the street. The ones who sell books generally seem to be readers, able to talk to you about any title you pick up, and sometimes the price is a little more negotiable, if that’s something that is important to you.

These are just a few of the landmarks that can be found throughout the country. I would love to hear about others, particularly writer’s homes, so please share the info if you have it.