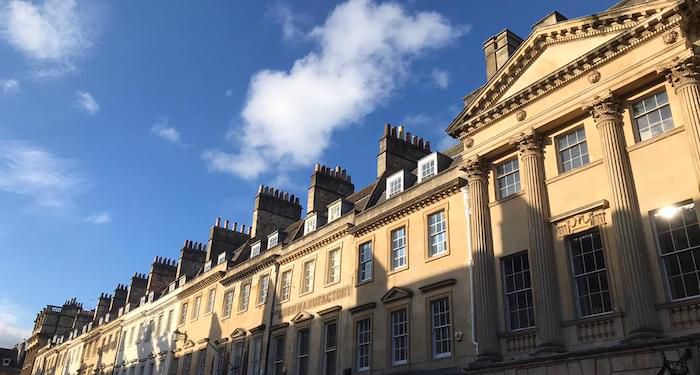 Although it’s perhaps most renowned for its serene airs, ancient ruins, and gorgeous Georgian architecture, the city of Bath in Somerset, England, is also one of the most exciting European cities for adventuring bibliophiles. The city has been a home and holiday setting for a number of great 18th and 19th century English novelists and poets, including the likes of Jane Austen, Charles Dickens, Henry and Sarah Fielding, Tobias Smollett, Mary Shelley, and William Wordsworth. It’s also featured as the backdrop for some of the famous works by these authors. Bath continues to live up to its rich literary and cultural history by harbouring some of the most beautiful bookstores in the UK. If you ever find yourself wandering through the cobblestoned streets of this quaint city, here are some of Bath’s best bookish sights you’ll definitely want to add to your tourist itinerary.

If you’re travelling to Bath by train, this time-travelling bookstore will likely be the first of the city’s literary landmarks that you’ll see as you exit the station to approach the city centre. This family owned business has been binding and selling books for over a century, and is especially well-known for having been assigned the role of official bookseller to Queen Mary (Queen Elizabeth II’s Grandmother). George Bayntun is a literary museum in its own right, keeping an array of old and new, local and international books in various editions and conditions. Additionally, the shop offers services for exquisite, hand-crafted binding and stocks a range of beautiful antique prints which add to the overall visual splendour of this well-known literary institution.

Mr. B’s Emporium is one of the UK’s best-kept literary secrets. It’s diverse collections, quirky decor, and interactive reading experiences are just some of the things that make this book emporium extraordinary. The store prides itself on helping readers find their ideal book fit, and usefully has shelves set up with favourite books of customers and employees that are great for readers looking for great not-so-hot-off-the-press reading recommendations. Although the store has reopened following the relaxation of lockdown regulations in the UK, in the last couple of months Mr. B’s has also moved towards producing online content on their new YouTube channel. So if you’re planning a trip or aren’t able to make one just yet, be sure to check out this new material for a taste of the store’s offerings. Mr. B’s is the Willy Wonka of bookstores and is definitely not a place to miss!

This charming book shop is one of four branches of Topping & Company Booksellers based in the UK. The name might evoke the image of an old-timey book haven tucked into a forgotten corner of the world. But the brilliant, sky blue painted exterior of this store pops out against the subtle stoniness typical of Bath’s buildings, boldly signalling its modern charm to passersby. If its bright exterior doesn’t do enough to invite readers in, then the promise of a complimentary coffee while you browse the shelves certainly seals the deal. The store is stacked with books to the brim and has a notably extensive section on design/art/photography/craft related texts. They also have a wide range of signed first edition copies of well known works of fiction by award-winning contemporary authors.

At the corner of a bunting draped lane not far from the Circus – the 18th century collection of townhouses famously designed by John Wood the elder – is another one of Bath’s cultural treasures: Bath Old Books. This unassuming shop holds an impressive range of fiction and nonfiction, and is also an excellent place for sourcing rare first editions or out of print books, specialist literature and antiquarian books. Some of their specialist genres include the history of Bath, Jane Austen, and other city-specific literature. The store is not far from St. James Square and could easily be coupled with a visit to the rumour-has-it holiday home of Charles Dickens.

Jane Austen spent several years in Bath from 1801–1806, and is celebrated as the city’s most famous resident. There is no shortage of activities for Austenian lovers in Bath, from a visit to the Jane Austen Centre to walking tours of sites connected to her personal life and the lives of her characters. One especially fun expedition to make is a search for Austen’s former home at 4 Sydney Place opposite the city’s Holburne Museum. The stroll down to Austen’s residence from the city centre takes you through some of the loveliest streets in Bath, where you can picture yourself promenading in true Jane Austen style à la Emma Woodhouse or Lydia Bennet.

There’s no denying that Bath was a major source of inspiration for author Charles Dickens, who references the city directly in some of his works including The Pickwick Papers, which is partially set in well known parts of the city. However, his whereabouts and various residences in Bath have been a little more of a subject of debate amongst historians. Still, a plaque to commemorate his presence in the city can be found at 35 St. James Square, where he is thought to have frequently visited his close friend Walter Savage Landor.

According to historical records, including letters written to and from members of William Wordsworth’s family, the poet frequently visited Bath on holidays to unwind, and capitalise on the health benefits of the city’s water spas. During one notable visit to Bath in 1841, Wordsworth attended the wedding of his daughter Dora at St. James Church (which is now a supermarket) and for the occasion the wedding parties took residence at 12 North Parade. A commemorative plaque has been positioned nearby at 9 North Parade, next to The Parade Park Bed and Breakfast in Bath, to record Wordsworth’s time there. This spot also happens to be a short walk away from Bath’s Sally Lunn’s Eating House, which has specialised in selling sweet buns since the 17th century and supposedly enjoyed the patronage of Jane Austen. Given its proximity to Wordsworth’s holiday accommodation, it’s tempting to wonder whether Wordsworth too would wander here lonely as a cloud in his visits to Bath, for a quiet moment and some bready-cakey goodness.

Given the kind of calmness characteristic of Bath, with its neatly ordered buildings and understated, classical aesthetic, the city’s connection to one of the most influential gothic-cum-science-fiction novels in history might come as a surprise. Mary Shelley is thought to have written significant parts of her novel Frankenstein while living in Bath in 1816–1817 – a time she seems not to have publicised because of her particular circumstances during the period. Although the building Shelley resided at while in Bath was demolished, the city has set up a commemorative plaque at its former location which is today just behind the famous Pump Room restaurant in Abbey Churchyard. Ironically, as the plaque points out, the only part of the older building that is still around is the underground cellar which today houses an electricity substation – a quirky homage to Shelley’s electrifying novel. The city has also recently finalised plans to establish an official museum to celebrate Shelley, her work and her time spent in Bath.