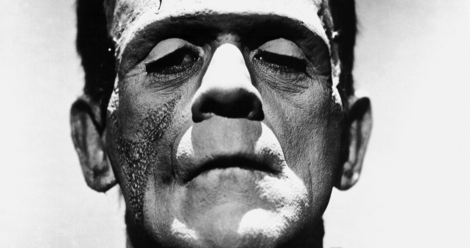 This article is about monster kissability, but first I need to explain why I love literary monsters. They show us who we are and what we value, if we are willing to stop and listen.

Monsters live on the outskirts of everything. They live hidden in a cave, or at the bottom of the well, or in a swamp dripping with moss. I love their slimy skin, excess of eyes, and weaponized appendages to protect themselves from a world that wants to hurt them.

Monsters speak to my feelings about belonging and isolation. They make me wonder about what makes someone ugly and dangerous, and who decides what a monster even is. Monsters make me feel a little less alone in my weird brain and like it is okay to be different. When the villagers in a monster story go into a hysteria, I press my hand to my heart and think, “yes, I also cause my town to run amok in fear when they catch a glimpse of my wretched face. We are the same, you and I.” They are the outcasts and have whole worlds and histories inside of them if anyone bothered to ask.

And maybe they could use a little love? 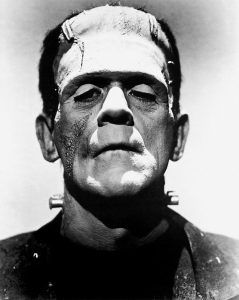 The brainchild of the innovative and incredibly goth 18-year-old Mary Shelley, Frankenstein’s monster is a tragic figure. Referred to in the novel Frankenstein as “the Creature,” a scientist creates him only for people to fear and hate him on sight. He runs away to the forest to be alone and eventually commits a bunch of murders. But: did you know that he secretly supports a poor family in the woods? Because he is a treasure who deserves everything good in the world?

At one point, he tells Dr. Frankenstein that as a living being, he has the right to a companion. Well, Frankenstein’s monster, I agree, and here I am.

Despite my love for monsters, I’m not actually super down with horrifying stitched-together human flesh. This takes off some kissability points for me. Yet, I feel for him. His creator rejects him. He is completely alone in a world that he never asked to be a part of in the first place. I think at his core, he’s a sweet guy who just needs someone to cut him a break. Would I kiss? Yes, but super quickly, so I wouldn’t touch his weird pieced-together flesh for too long. Rating: 2 out of 5 on the Kiss Scale

This piece of work is all tentacles and has designs to rule over earth once he is released from his evil slumber in the ocean. Created by H.P. Lovecraft, he is one mean dude and a rare example of a monster I loathe. Monsters are good, but evil is not. Would not kiss. Nope nope nope. Rating: 0 out of 5 on the Kiss Scale 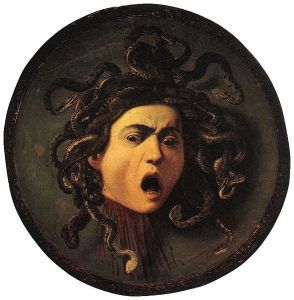 According to Greek myth, Medusa was once a regular girl who the most powerful beings in the world brutalized into monsterhood. First, Poseidon rapes her in the temple of Athena. She punishes Medusa by cursing her with snakes for hair and a face so hideous it turns people to stone. Perseus, Certified Asshole™, beheads her and has the audacity to use her severed head as a weapon for turning his enemies to stone.

I hope Medusa turned as many people to stone as she could. I hope she did it to everyone who didn’t protect her.

Medusa is my favorite on this list. I like to imagine her as the one to behead Perseus, and then kill Poseidon and Athena. Once all that is done, she’ll take me in her arms and we’ll kiss as the sun rises pink and fresh on a new day, her abusers safely dead at our feet. Rating: 5 out of 5 on the Kiss Scale 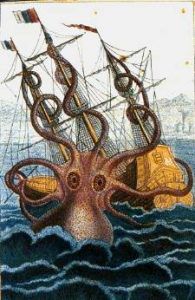 The Kraken is a huge, octopus-type sea monster. It appears in a poem by Tennyson, “The Kraken,” which you can read here. It causes all sorts of maritime drama, creating huge waves, whirlpools, and pulling ships to the bottom of the sea.

We know so little about the ocean and we sure don’t treat it very well, so maybe it’s best to just let the Kraken have this one. When it wraps its tentacles around a ship and pulls it down to its demise, it’s just protecting its home. I respect the Kraken. Rating: a blown kiss sent on the wind and carried to the sea; or, 3 out of 5 on the Kiss Scale 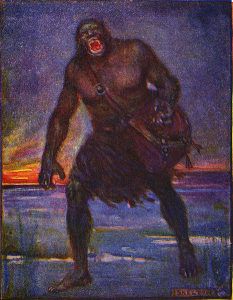 An antagonist in the Old English epic poem Beowulf, Grendel is a monster frustrated with the incessant singing in the nearby mead hall. In response, he attacks it every night for twelve years. I’ve had noisy neighbors; I get it. But at a certain point, you just have to cut your losses and move. Surely there are other places for Grendel to do his skulking and teeth-gnashing.

I less want to kiss Grendel and more want to sit him down and hand him a calming glass of water. “Yes, the drunk singing Danes are very annoying,” I would say to him soothingly. I might kiss my fingertips and then press my fingertips to the top of his head to deliver the kiss indirectly. Rating: 2 out of 5 on the Kiss Scale

All of these classic literary monsters, except for Cthulhu, deserve a chance at love. Above all, monsters can teach us a lot about who we are and who we are not. Monsters aren’t necessarily evil. They just embody our insecurities and the things we fear about our world and ourselves.

I am trying to get to know my own monster self. I don’t mean that I have some kind of gnarled beast alter-ego, but I do want to understand the unpleasant feelings when they stir in my deep dark guts. Maybe the Frankenstein’s monster in me is feeling rejected. Maybe I’m so irritated that I could attack a mead hall every night for twelve years. Whatever the case, I know I can look to literary monsters to help me understand myself.