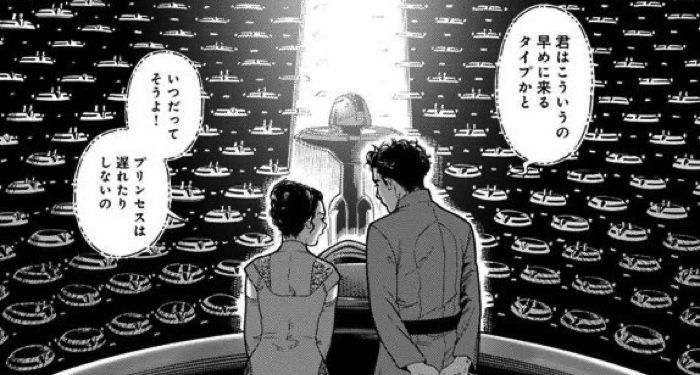 Raise your hand if you thought Han Solo was Leia Organa’s first love. It’s okay if you did, I did too until I read Claudia Gray’s Leia: Princess Alderaan and fair enough, she was only 19 when they met and had been awfully busy princessing, rebelling, and getting a damn PhD while Luke was whining about power converters and Han was…doing Han things. Stealing shit. Brushing Chewie. Parsecs. Shooting first. But this is a comics column so if we’re going to talk about Leia’s first crush, let’s do it in the context of Haruichi’s manga adaptation of Leia: Princess of Alderaan, which may not be the first time she sees him but is, however, the first time we do. Friends, allow me to introduce you to Kier Domadi:

Look at that adorable grin. We don’t get to experience Leia as goofy teenager often. Hypercompetent politician? Yes. Tactical genius? Absolutely. Take no bullshit commander? Yep. Blushing fangirl? Not so much and it’s nice. It’s nice to know she got to have those moments once in a while. That she had the chance to make googly eyes at an emo boy with an attitude problem who probably wore too much cologne and she thought had a nice butt.

They don’t hit it off immediately, though I won’t go so far as to call it an enemies-to-lovers. He’s a little shitty about her being a princess despite knowing she works her ass off. She’s a little awkward because he’s handsome and a little shitty, and then when he tries to recover, he’s a little dumb which is a terrible combination. Also kind of super cute.

It’s a bonus for her that, unlike most of Leia’s cohort, Kier isn’t competition. While he does serve in the apprentice legislature with her as a second representative from Alderaan, Kier’s intention is to become a historian specializing in the Clone Wars. They also have their own individual dangerous hobbies, which is absolutely essential in keeping a relationship fresh: he participates in illegal Clone Wars reenactments where he learned survival skills that served them well on their weird royals-do-Outward-Bound training camp, while she uses her free time, much to the concern and pride of her parents Queen Breha and Viceroy Bail Organa (for those of you who don’t know, Organa is Breha’s last name; she’s the royal, Bail is her consort and thus took her name when they were married), to assist in their efforts to overthrow the Empire.

It turns out, alas, the Kier is one of those guys — and there are are far, far too many of them in fiction and in life — who assumes that his beloved, while clearly brilliant, is to blind to see what is going on right in front of her face (obviously she’s not, since she’s the one doing it). When she does tell him that her pretty little head isn’t fit to judge the morality of her parents’ actions (his darling could not possibly be involved!), instead of helping Leia help Breha and Bail, or at least keeping his mouth shut, Kier starts to gather intelligence for the Empire. Because both his planet and his girlfriend need his protection.

When Leia cancels plans with Kier to go on a mission to warn the rebel base on Crait that the Empire knows about them and is on its way, Kier follows her, planning to spy. Leia arrives first and warns the Rebels of the impending attack. They set their facility to self destruct and Kier’s ship is caught in the shockwave. With his dying breath, still believing Leia to be a pawn in her parent’s game, he asks her to turn his data over to the Empire.

It’s awful. He’s a kid. He thought he was doing the right thing. In a stupid, stupid boy way but he had good intentions. It wasn’t that he thought the Empire was right. It’s that he loved his home and he loved Leia and he wanted them to be safe.

I wish he had trusted her.

Love is rough in the galaxy far, far away. In some ways, I wish Leia had been able to have that first puppy love without the tragedy; that drift-away break up, or the silly fight that seems so important when you’re 16, or the trading up when you realize the boy is a generic, walking ego and why would you date him when Amilyn Holdo is literally right there (Star Wars is gay, change my mind)?

I wish things had gone better with Han too.

But ain’t that the bitch. A lot of men say they want strong women and then they get one. Leia is the strongest of us. She’s who two generations of women learned to be strong from. Maybe she learned some of that from what happened with and too Kier. If so, I guess we should thank him.