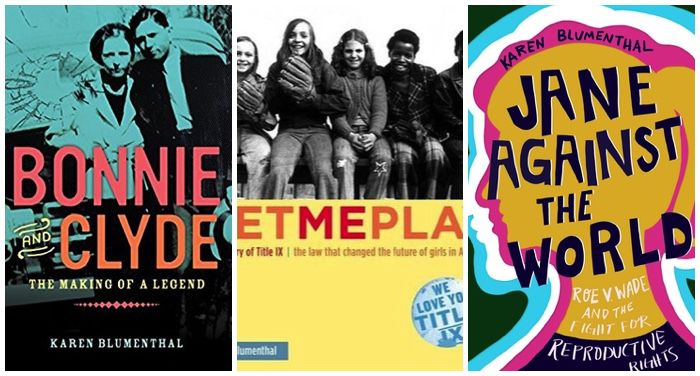 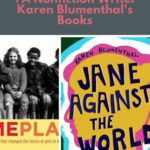 To call this a season of unbelievable loss doesn’t begin to capture the reality. It’s not just COVID-19. So many luminaries have died in recent months, and in recent weeks the children’s literature world has seen the deaths of some of the finest.

Karen Blumenthal, a journalist and author of nonfiction for young readers, died from a heart attack on Monday, May 18. For readers who love narrative nonfiction for middle grade and young adult readers, her name is intimately linked to that category. She was 61.

Blumenthal, alongside author-illustrator Grace Lin, also founded the #KidLitWomen initiative in 2018. This initiative, still active, raises awareness of gender issues and intersectionality in the children’s literature world, from books to community.

She was also a fierce advocate for libraries, including her hometown Dallas Public Library.

Her career began as a journalist in Dallas, and as she notes on her website, somewhere along the way she became frustrated with the options for her daughters in the realm of nonfiction for young readers. In doing so, she blazed a trail to compelling, challenging nonfiction that encourages curiosity for tweens and teens, and her work never shied away from looking at hard issues.

Many readers who haven’t spent time on the nonfiction side of youth literature might not recognize her name, but chances are they will recognize the topics about which she wrote. Over the course of her writing career, she published 12 books on topics ranging from the history of Title IX to Roe vs. Wade. Among the honors her writing received were the Robert F. Siebert Award for best informational books, a Jane Addams children’s book award, and she was a finalist for the Young Adult Library Service Association’s Excellence in Nonfiction Award.

If you haven’t yet had the pleasure of diving into her books, you should. Here are some great places to begin with Karen Blumenthal Books. 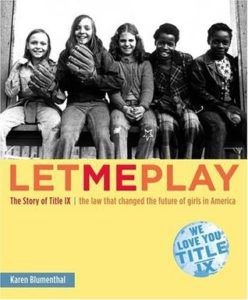 Let Me Play: The Story of Title IX: The Law That Changed The Future of Girls in America

Among Blumenthal’s earliest books was this one, and it was the first title I read by her. A deep dive into the history of the Title IX legislation enacted in 1972 and the ways it impacted how girls could participate in sports. What many young readers might not know is that having girls’ teams in schools wasn’t always a given. Many didn’t believe girls could—or should—participate in sports like basketball or volleyball, and it was thanks to Title IX that new opportunities for girls to take part in sports emerged.

What makes this book especially engrossing is that it’s not solely historical. Blumenthal explored the ways Title IX has significant ramifications for all genders up to its publication. There are great images, side bars, and resources included. 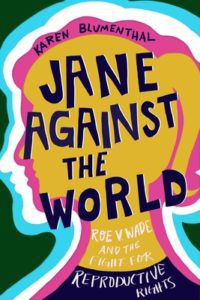 Jane Against The World: Roe V. Wade and the Fight for Reproductive Rights

Following the history leading to the landmark Roe vs. Wade decision, the book takes a sharp look at why it is America is still deeply divided over reproductive rights today. Not limiting discussion to white women, this book looks at how decisions further harm disadvantaged communities, including communities of color and the economically challenged.

Like all of her books, this one has a significant amount of back matter. It’s meticulously researched and thoughtful and a reminder about the respect Blumental has for young readers interested in big topics. 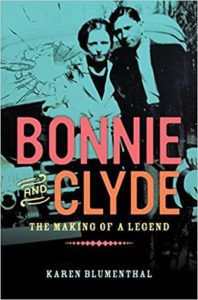 Bonnie and Clyde: The Making of a Legend

What do you know about infamous duo Bonnie and Clyde? Chances are it’s not accurate but instead a sensationalized version of their lives pulled from film.

Blumenthal offers up the history of both of these criminals, but she does so with the backdrop of why it is they’ve gained such infamy and acclaim while committing heinous crimes. Interspersed are photos and other artifacts, as well as excellent short bios of those who were murdered by the duo.

This book isn’t apologetic for the behaviors of the team, but, it gives tremendous insight into what it is that drew them to each other, the realities of their lives in small town Texas, and life more broadly in the 1930s. None of it is sensationalized, which elucidates the power of Blumenthal’s writing and ability to tell a compelling, factually-driven story.

Do yourself a favor and pick up some of the best nonfiction books for young people. Once you read through the above titles, know Blumenthal wrote wonderful nonfiction about Hillary Clinton (Hillary Rodham Clinton: A Woman Living History), Prohibition (Bootleg: Murder, Moonshine, and the Lawless Years of Prohibition), Steve Jobs (Steve Jobs: The Man Who Thought Different), and even the Tommy Gun (Tommy: The Gun That Changed America).