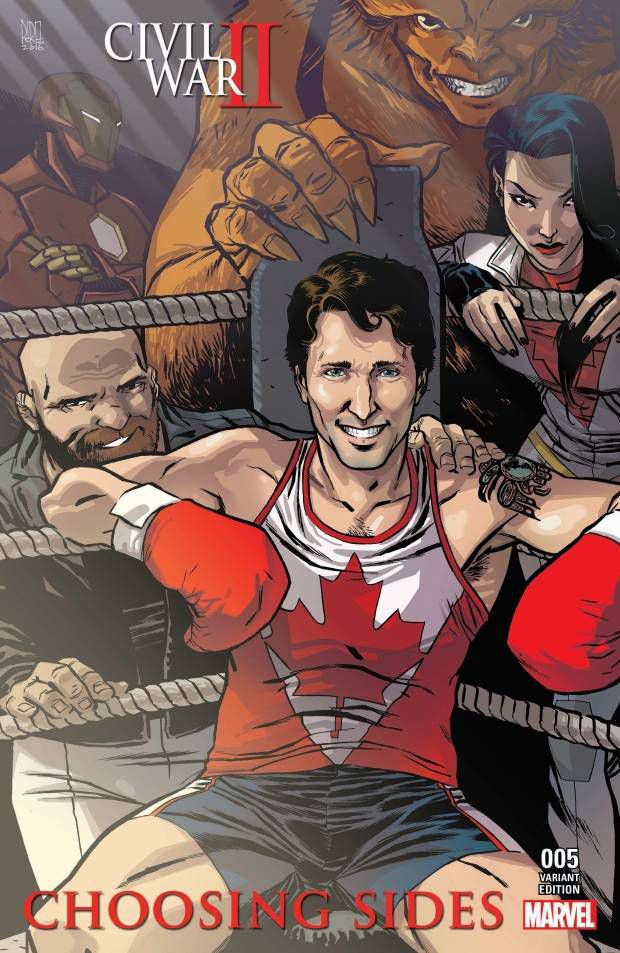 Panels fam, I know I sometimes push the boundaries of “news” when it comes to keeping you informed about the greatest superhero team in Marvel comics history — yes, I mean Alpha Flight, why does everyone always want to clarify that — but this is legitimate news. So legitimate, in fact, that I have come off my summer hiatus expressly to tell you about it.

Alpha Flight is going to be in CIVIL WAR II #5.

Of course, savvy readers will know that this is just another way baby Trudeau is following in his dad’s footsteps: Pierre Trudeau was featured in X-MEN #120 in 1979, where he was drawn by John Byrne in an issue that introduced readers to the Alpha Flight team in order to flesh out Wolverine’s backstory.

John Byrne didn’t really like Trudeau very much — okay, he hated him — so the depiction is not what you might call flattering. But the same doesn’t appear to be true in CIVIL WAR II #5, where Chip Zdarsky’s story and Ramon Perez’s art seems to bear a much truer likeness to the current Prime Minister of Canada.

Look! There’s Puck! And Sasquatch! And Aurora! And Ironman, I guess, but who cares, because Puck is there! And of course Trudeau is draped in the flag and ready to box. Because of course he is. But the best news is, it’s not just a fun variant cover — it’s actually an Alpha Flight story with Trudeau at the centre. Excitement!

We’ve already told you all about what a nerd PMJT is, so I’m sure he’s delighted that he’s in a comic (indeed, the CBC confirms that while the Prime Minister’s Office has not endorsed the comic — where apparently Trudeau digs right into the ethical debates at the core of CIVIL WAR II — they haven’t stood in the way of its creation, either).

Really, the biggest miracle here is that suddenly I give a crap about CIVIL WAR II, and all it took was Alpha Flight and Trudeau II to do it. Now I have to catch up!