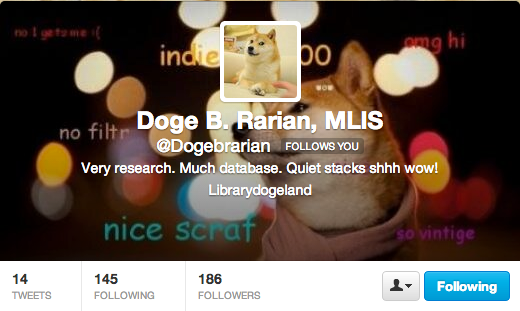 Libraries and library people are usually associated with cats more than dogs. Sure, therapy dogs are being used in libraries more and more. But, on the other hand, “Library Cat” gets its own entry on Wikipedia. (Dewey is a recent example, as is this bowtie-wearing Russian cat, but the tradition of cats living in libraries is a very old one.)

Evidence of a frolicking cat in a medieval scriptorium. From Medieval Fragments.

I’m more of a cat person myself—hence my literary cat names post and all–but still, I was amused to find a new, potentially iconic (if only for a few moments) canine addition to the library pantheon.

As you may have heard, Doge is the new LOLcat. In place of a cranky cat bracketed top and bottom with bold statements, Doge typically has a dog (a Shiba Inu, classically) surrounded by colorful, reflective, linguistically wonky exclamations. Such new. So innovation.

From a Slate article wondering how exactly you pronounce “doge.”

And now, fulfilling all the hope and promise offered by a new meme, doge has come to the library. Introducing Dogebrarian:

Self-evidently ridiculous, Dogebrarian has nevertheless prompted enthusiasm, disdain, and furious speculation in library-twitter-land. What is this? Who is behind it? Huh?

Even Book Riot’s very own Rita Meade has fallen under a cloud of (alcoholically refuted) suspicion:

It’s still too early to tell if Dogebrarian will shine or fizzle. But either way, for those dog people out there, it must be nice to see more dogs in the library mix.

We cat people will sit over here and smirk, catlike, with the knowledge that we remain superior.