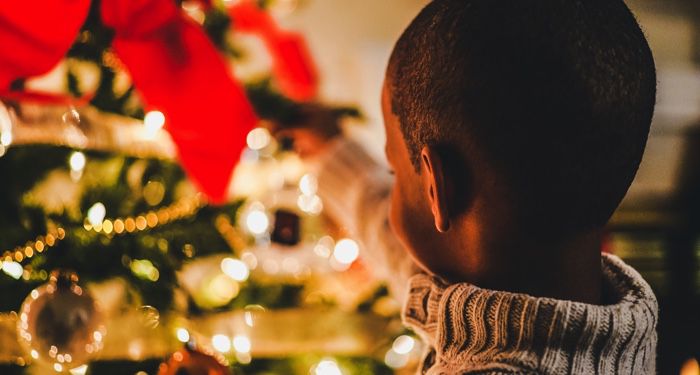 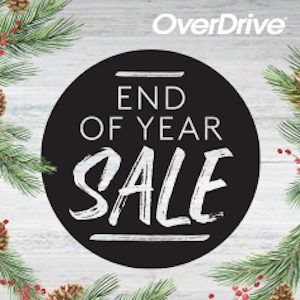 OverDrive is the leading digital reading platform for organizations worldwide. We are dedicated to “a world enlightened by reading” by delivering the industry’s largest catalog of ebooks, audiobooks, streaming video and magazines to a growing network of 50,000 partners in 78 countries. 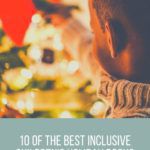 Confession: I never did take down the artificial fir tree we set up in the Children’s Room of my library in December 2019. I’d already been calling it our “holiday tree,” and the kids were still having a blast hanging crafts on it. So, I figured, why not make it a holiday tree for every holiday, all year round? We’d make New Year’s ornaments! And Valentine’s Day ornaments! And Saint Patrick’s Day ornaments! And—well. And we all know how March 2020 turned out.

Now, the winter holidays are upon us again, the tree is still there, and it’s a bit sad that it’s not safe yet for the kids to charge in and redecorate it. But! As anyone who reads a lot of children’s books has already heard (repeatedly), decorations don’t make the holidays. The Children’s Room, rightfully, isn’t bustling with activity this year. But whether you’re planning virtual storytimes or seeking out great books for kids to enjoy at home, the stories we share with children still matter—and perhaps it’s more important this year than ever that we choose stories that will make them feel less alone.

With that in mind, here are ten inclusive children’s holiday books to read this season. Any one of these titles will give some kids a welcome view of characters who look like them, and others a whole new way of looking at the winter holidays. Whichever the case, however, each title is sure to bear comfort and joy. 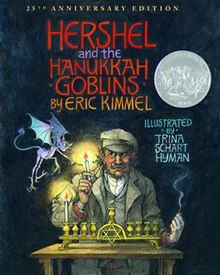 As madly as I love Hershel and the Hanukkah Goblins, I once briefly doubted it as a story time choice when I enthusiastically asked five kids what they already knew about Hanukkah and got five blank stares in return. Should I have picked a more basic book about Hanukkah to introduce them to the holiday? I thought frantically as I opened the book. Nope. All five children were instantly enraptured by Hershel of Ostropol, who takes it upon himself to outsmart a band of goblins who are terrorizing a village synagogue, preventing the villagers from celebrating Hanukkah. As each goblin appeared, my little audience laughed harder at Hyman’s creature designs and Kimmel’s dialogue. As the action built to the eighth night of Hanukkah, they gasped in suspense. That’s because, while Hershel is a fantastic representation of Jewish folklore and the celebration of Hanukkah, it’s also the kind of book you make a yearly tradition of reading aloud because it’s so utterly delicious to folks of all backgrounds and ages. If it really was those five kids’ first-ever exposure to Hanukkah, it’s hard to imagine a more joyful introduction. 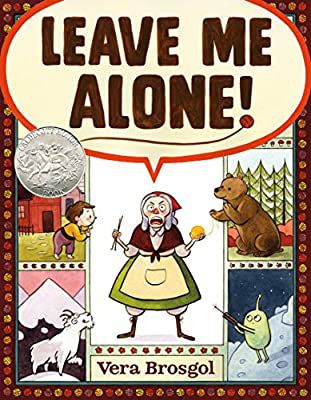 Leave Me Alone! by Vera Brosgol

Beyond exasperated by her grandchildren’s distracting questions about her important winter knitting, an old woman stomps away from her family home with a sack full of yarn and a desperate command: “LEAVE ME ALONE!” She travels up a mountain, to the moon, and even through a wormhole before finding the creative solitude she craves—but when her work is finally done, its purpose directs her back where her journey began. This funny, whimsical story is pretty universally relatable to winter holidays, the themes of family and giving, and every children’s librarian who’s ever been drawn away from their work on a dazzling new bulletin board by a piercing cry of “Tell him to stop licking my book!” 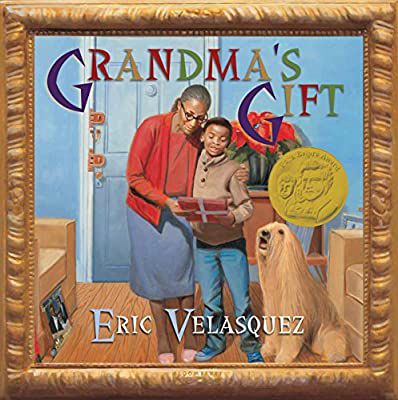 This tender autobiographical story might make you cry, but only in the good way. Velasquez remembers the Christmas that made him an illustrator, when he and his Puerto Rican grandmother visited the Metropolitan Museum of Art and spotted a surprisingly familiar face among the portraits. There’s tangible warmth to each scene in Grandma’s Gift, whether we’re following young Eric and Grandma through the museum itself, around their own neighborhood of El Barrio, or into Grandma’s kitchen as she prepares her holiday pasteles. Eric confesses early on that translating English writing into Spanish for Grandma sometimes makes him feel “like going to school for two,” but that degree of emotional honesty makes the book an even more transparent love letter to his grandmother at every turn. 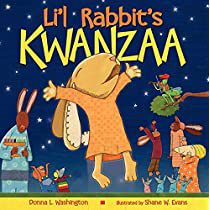 Li’l Rabbit sets out to find a special treat for his ailing grandmother, so that his family will be able to celebrate the Kwanzaa feast known as Karamu even though she is ill. His quest ultimately illustrates the Nguzu Saba, or Seven Principles of Kwanzaa. (Also, according to many descriptions, the character of Li’l Rabbit is based on that of Brer Rabbit! It’s a fitting inspiration, since the tales of Brer Rabbit and the holiday of Kwanzaa both developed among African Americans as a means of connecting to and celebrating African heritage.) 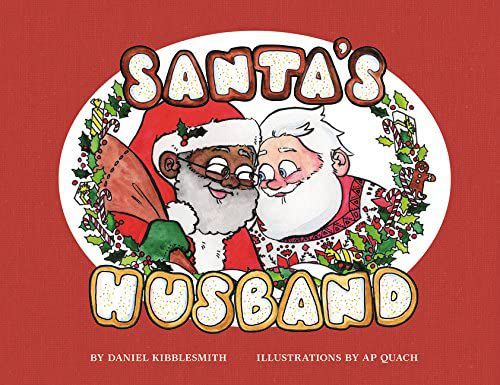 In December 2016, the Mall of America hired a Black Santa Claus, and a ludicrous tsunami of racist outrage broke loose. Daniel Kibblesmith taunted the infuriated bigots by tweeting: “Me & [my fiancee] have decided our future child will only know about Black Santa. If we see a white one we’ll say, ‘That’s his husband.’” By the next Christmas, Kibblesmith and AP Quach had transformed Kibblesmith’s joke into an utterly delightful children’s book. Santa’s Husband is a sweet, silly imagining of Santa and Mr. Claus’s domestic life, complete with a wedding officiated by Parson Brown. “Maybe Santa Clauses can come in all shapes and colors and sizes!” the story concludes. “Just like the families that Santa Claus visits all over the world.” 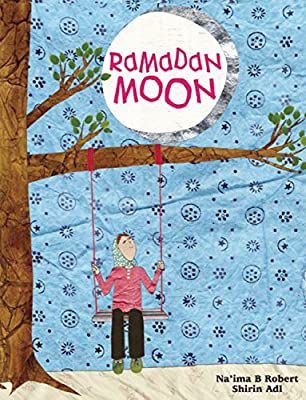 Ramadan Moon by Na’ima B. Robert and Shirin Adl

Written in free verse poetry and gorgeously illustrated with watercolors and collage, Ramadan Moon celebrates the observation of Ramadan and Eid by Muslims around the world. The young narrator describes the customs of these religious holidays while also expressing the wonder and sense of community they inspire in her. She savors jubilant moments with her family as well as quieter ones gazing at the Ramadan moon, which reminds her to “share more, pray more, do more, and give more.” 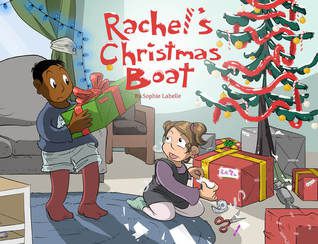 Sophie Labelle is best known for her webcomic Assigned Male, which follows a trans child whose caregivers aren’t always accepting of her gender identity. In Rachel’s Christmas Boat, Labelle flips that script, telling the story of a transgender parent coming out to an extremely sensitive child. When Lulu’s dad explains just before Christmas that she’s a woman and her name is going to be Rachel from now on, Lulu frets that Santa won’t hear the news in time to change all the name tags on Rachel’s Christmas gifts. Lulu sets about making sure her dad has the Christmas of her dreams, so there’ll be no doubt in Rachel’s mind that her family loves her just as she is. 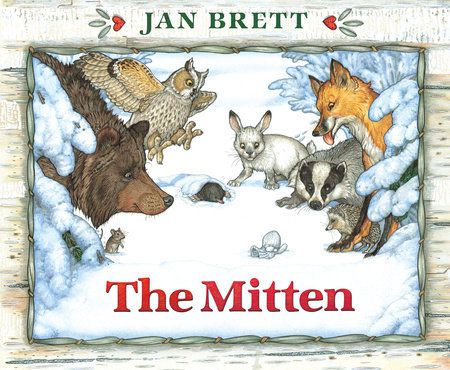 A classic winter holiday text with intricate illustrations, The Mitten tells the story of a lost mitten and a motley crew of forest creatures. The small white mitten expands into a shelter as increasingly large animals creep inside in search of warmth. Simultaneously, along the borders of the page, Brett shows the mitten’s original owner enjoying the snowy woods with no idea that his lost article of clothing has become a haven for so many other chilly beasts! 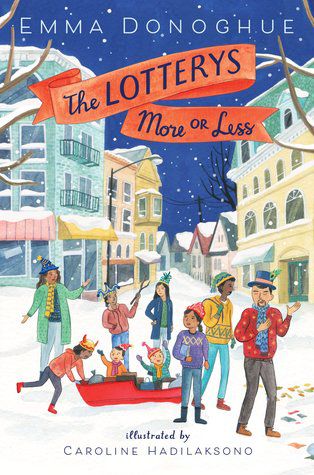 The Lotterys More or Less by Emma Donoghue

I’ve written previously about Emma Donoghue’s delightful middle grade novel The Lotterys Plus One, and its holiday-themed follow-up is just as lovely. Every year, 9-year-old Sumac Lottery looks forward to her big, diverse family’s week-long observation of winter holiday rituals: the Solstice Parade, the Saturnalia Banquet, and the neighborhood-wide cookie party, to name just a few. But this year, a fierce storm has knocked out the Lotterys’ electricity and delayed some family members’ travel plans. For Sumac, who doesn’t even like it when it doesn’t snow in time for Solstice, these breaks in tradition are totally unacceptable! How will she get through a celebration that’s only “more or less” perfect? 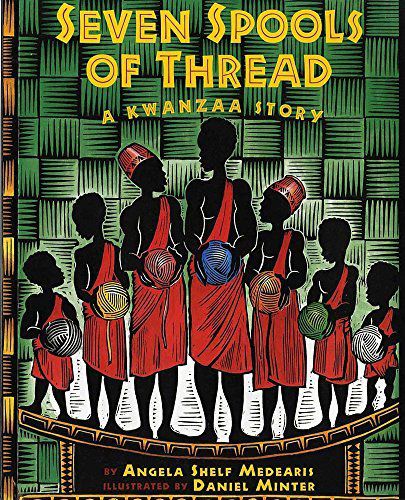 Seven Spools of Thread opens with a brief history of Kwanzaa and a fun challenge for young readers: can you spot all seven principles of Kwanzaa in the story? From there, we travel to Ghana and meet seven bickering brothers whose father challenges them to weave seven spools of thread into gold. It quickly becomes clear that in order to transform the thread, the brothers will have to begin by transforming themselves.