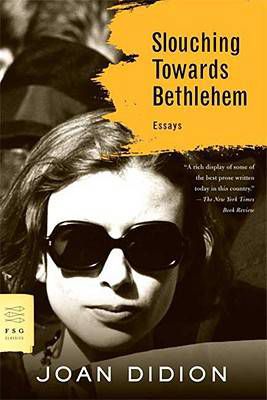 It’s sunny late-1940s Los Angeles. A veteran police detective and a veteran prostitute share a walk in the park. There are cigarettes and a pedestrian bridge to cross. The detective and the woman know each other too well to be friends, but they walk together. About her plans to leave town, the woman tells the detective, “It’s nice to have someone to say goodbye to.”

The scene is from the 1981 film True Confessions—think Chinatown less dark with more heart—starring Robert De Niro and Robert Duvall. An adaptation of the 1977 novel of the same name, the screenplay was written by author John Gregory Dunne and wife Joan Didion. At its core, the movie is about people aging into the consequences of a lifetime of choices, a defining focus of Didion’s first book of nonfiction essays, Slouching towards Bethlehem (1968). To read the book’s title essay is to roam the blocks of Haight-Ashbury during the height of the Sixties, to feel the sinking lost-ness and anxious uncertainty of that time and place. The essay’s opening sets a broad lens for the more specific, on-the-ground writing that will follow:

The center was not holding. It was a country of bankruptcy notes and public-auction announcements and commonplace reports of casual killings and misplaced children and abandoned homes and vandals who misspelled even the four-letter words they scrawled . . . It was not a country in open revolution. It was not a country under enemy siege. It was the United States of America in the cold late spring of 1967, and the market was steady and the G.N.P. high and a great many articulate people seemed to have a sense of high social purpose and it might have been a spring of brave hopes and national promise, but it was not, and more and more people had the uneasy apprehension that it was not.

Not much mental stretching is required to imagine ourselves in 2023, picking up the old Kindle Inferno or iBrain and reading the above passage and thinking back to this spring of 2013. A feeling of “uneasy apprehension” seems everywhere these post-9/11, post-recession days. I feel it even as I wonder if there is anything more cliché than an age of anxiety, if perhaps this current feeling of uncertainty is something latent in the human condition, a byproduct of living in time, of not being able to see around corners into the future. And yet, like I said, I feel the uneasiness, the sense of history “turning and turning in the widening gyre” of the W.B. Yeats poem from which Didion drew the title for Slouching towards Bethlehem.

There is much to love about this book: the superior prose, the writing about cultural icons (John Wayne, Joan Baez, and Howard Hughes), the meditations on self-respect and morality, and the investigations of place (San Francisco, Los Angeles, Las Vegas wedding chapels, Hawaii). The best personal essays do not simply report or serve witness, nor do they simply preach or expound. They have to do both, to let us relive the event and to help us to share in some new perspective or understanding. This writing requires a kind of devastating (again that word) honesty. Here’s Didion in the book’s closing essay looking back at the younger self who would eventually have to flee New York in order to reset her life:

I stopped at Lexington Avenue and bought a peach and stood on the corner eating it and knew that I had come out of the West and reached the mirage. I could taste the peach and feel the soft air blowing from a subway grating on my legs and I could smell the lilac and garbage and expensive perfume and I knew that it would cost something sooner or later—because I did not belong there, did not come from there—but when you are twenty-two or twenty-three, you figure that later you will have a high emotional balance, and be able to pay whatever it costs . . . Nothing was irrevocable; everything was within reach.

This passage also exemplifies one gift of really good writing: to place the reader in the here-now of the always-fleeting moment and to let us look around, to take stock, and to gather ourselves before what must come next.

For more on Joan Didion’s early career and how typing out Hemingway and Conrad and writing copy for Vogue influenced her development as a writer, see Michiko Katukani’s 1979 New York Times profile. To spend a few minutes with this younger Didion, check out this short interview with Tom Brokaw: