It’s hard to think of the right words to write about the recent political events surrounding refugees and immigrants entering the United States and the moral injustice of families being separated, imprisoned, and inhumanely punished at the U.S. Border. And I don’t have the right words for describing the end of DACA or the demonization of Syrian refugees. Of course, part of me wants to say this isn’t America. Except, I also don’t have the right words to write about the Immigration Act of 1924 and that was almost a hundred years ago. I don’t have the words today, but so many immigrants have used words to share their stories in picture books, young adult books, fiction and nonfiction, and new releases that are coming out this year. And so many writers have used immigration poems to talk about their experiences. These words are more than just right. They are moving, emotional, informative…I don’t have enough words for these poems, so I’ll leave you with the beautiful ones crafted by these fifteen amazing poets. 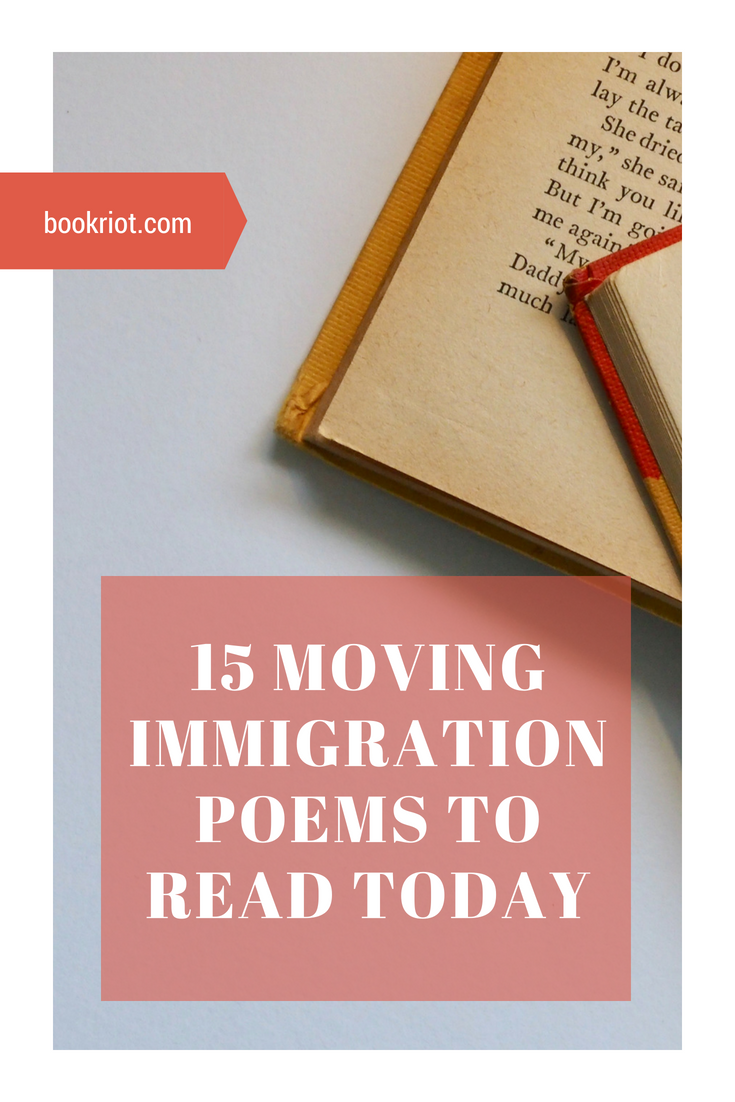 1. “Things we carry On The Sea” by wang ping

We carry tears in our eyes: good-bye father, good-bye mother

We carry soil in small bags: may home never fade in our hearts

We carry names, stories, memories of our villages, fields, boats

We carry scars from proxy wars of greed

We carry our islands sinking under the sea

2. “The Unwritten Letter from my Immigrant Parent” by Muna Abdulahi

4. “Things That Shine in the Night” by Rigoberto González

Fulgencio’s silver crown—when he snores
the moon, coin of Judas, glaring
at the smaller metals we call stars
my buckle
the tips of my boots
the stones in my kidneys

5. “Everyday we get more illegal” by juan Felipe Herrera

6. “We Are Americans Now, We Live in the Tundra” by Marilyn Chin

Today in hazy San Francisco, I face seaward
Toward China, a giant begonia—

Pink, fragrant, bitten
By verdigris and insects. I sing her

A blues song; even a Chinese girl gets the blues,
Her reticence is black and blue.

8. “Translation for Mamá” by Richard Blanco

So tell me what you think of when the sky is ashen?
—Mahmoud Darwish

I could tell you that listening is made for the ashen sky,
and instead of the muezzin’s voice, which lingers
like weeping at dawn,
I hear my own desire, as I lay my lips against my mother’s cheek.

i am haunted by the chilling and inhumane realities faced by children and their loved ones at the US border. history is filled with those who tried to hide their alliances with evil behind convenient excuses like: “i was just following orders”. this is a systematic crusade designed to dehumanize and divide. and children are their leverage.

11. “A Simple Trajectory” by May Yang

Excerpt:
by HAUNTIE
Some time ago pale bodies slipped into Indochina and harvested
slave bodies to sow opium and mine silver. These slaves developed a
dependency on this unsustainable and temporary economy, becoming
heavily addicted to this intoxicating flower. Some no longer planted their
own food or raised their own livestock. A body from this time was that
of my grandmother’s. Impoverished—she was—mind, body and soul.

12. “At the Wall, US/Mexico Border, Texas 2020” by Paola Gonzalez and Karla Guitierrez

13. “Why Whales Are Back in New York City” by Rajiv Mohabir

After a century, humpbacks migrate
again to Queens. They left
due to sewage and white froth

banking the shores from polychlorinated-
biphenyl-dumping into the Hudson
and winnowing menhaden schools.

14. “Before Your Arrival” by Ellen Hagan

the ones who brought your father here, come. Bring
with them whole almonds, dried berries & clementines
wrapped in cloth. Their clothes & smart shoes too.

They come looking for the place I’ve taken your father.
Looking for the New York City that could rival home.
Your Abba loves the East Village, its graffiti, trash
& all the languages on all the streets.  On 14th & 1st,
we visit the Phillipines. Elvie’s Turo Turo.

15. “Lessons on being an African Immigrant in America” by Mwende “FreeQuency” Katwiwa

What other immigration poems do you recommend?