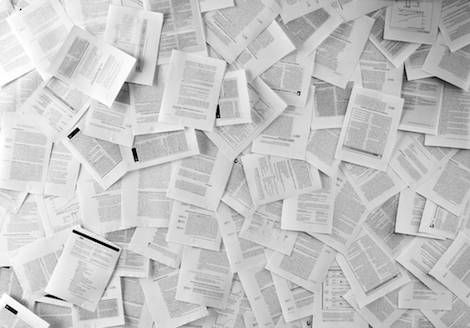 For six months I read through the slush pile of a well-known literary journal alongside a dozen other interns. Yes, author, it was me reading the short story you sold your soul to, glancing over the cover letter you addressed to the Fiction Editor, sending you that first form rejection. It was also me who sent you not one but two slightly personalized rejections. Only one of them was actually meant for you. I’m still very sorry and very embarrassed about that. I did the math, and I must have read around 500 submissions so it’s a miracle that mistake only happened once.

We interns were assigned twenty submissions each week. We had two options: pass them along for further consideration or reject them. As both undergrad and grad students, we also had classes. Even the internship was an “internship class.” Not only we were unpaid interns, we paid to be interns. (Yes, author, I know that’s ridiculous.) We helped with social media or the website, read contest submissions and did whatever else. Our “homework” was usually more reading or learning about the business of literary journals. As we suspected, the summer months were easier than fall when we were slammed with submissions and coursework.

You’re probably familiar with the immense backlog literary journals have. There can be months between submission and a response. With so much to sift through, submissions often get neglected in favor of something more urgent like midterms. With no limits on length (this is cool for you author, but not for us readers), we could end up with twenty flash fiction pieces or twenty novellas. As you’d expect some time management issues arose. Eventually the editors politely reminded us we needed to stay on top of our submissions after a random check revealed that some of us had 100+ works languishing in submission purgatory.

Unfortunately, author, yours was probably among them because an English major intern was struggling to pass Calculus at the time. Or they were picking up extra shifts at their paying job. Or they were just tired. It also could have been because they hadn’t gotten around to rejecting your piece yet.

I struggled with rejections, too. Not because I feared crushing someone’s literary dreams (I had faith you’d be okay) but because we were asked to send personalized rejections for promising but still lacking work. There were four templates for rejection: 1) form rejection, 2) I liked a, b, and c but no. Go ahead and submit more work if you want,  3) Wow so close, but not quite. Definitely send us more work though, and 4) I loved this so much that I’m writing a response from scratch instead of inserting my thoughts into a pre-written paragraph, but unfortunately no *frowny face*.  We left #4 to the editors.

Like the nonexistent length requirements, this take on rejecting work is great for writers. I loved it until I realized it’s way easier to send a form rejection than come up with even a personalized one. Even submissions I loved ended up getting a form rejection after a week trying to convey my appreciation while still saying no. We had to be careful about this because we didn’t want to say something dumb or be too encouraging and have someone resend a piece with whatever corrections we’d accidentally proposed.

Moving things toward acceptance wasn’t much easier. We passed work we liked to another intern. If that intern liked it, they passed it to another intern. And if they liked it, one of the editors got it and made the final call. So it mattered little, dear author, if I thought your work was a masterpiece. A second or third reader who disagreed could kill it as easily as an editor. Once I got a submission that I thought was a great commentary on race, and another intern dismissed it because she didn’t see the “thematic relevance” – a very annoying phrase uttered so many times it ceased to have meaning.

I’m sure I annoyed other interns with this, too. Like when I said no to a piece on gentrification in NYC ( two other interns loved it) because its white dude perspective killed its otherwise stellar structure and language for me. I did the same with other pieces that were good except for their sexism or racism or *insert other -ism here*. And for pieces that just weren’t good. I suppose we could have pushed harder sometimes, but as interns we were more inclined to believe people, even each other, when they said we were wrong about a piece.

None of the submissions I read got published. Either because I was extra choosy (I had a talk with one of the editors about that) or because I kept getting work that wasn’t up to par. As you know, author, most submitted work is rejected. Or maybe I was just a crap intern? (No, that wasn’t it.)  But I wondered later how many things had crossed my path that were better than I thought at the time, when I was distracted by work and classes or just burned out. And I still think about the writer I rejected twice, once incorrectly.