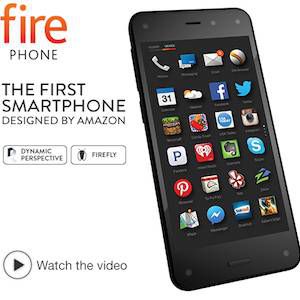 Techies and readers of the world unite! There’s a new piece of gadgetry competing for our money and our eyeballs, and it’s Amazon’s Fire Phone. But why, with the dominance of iPhone and Galaxy on the market, would one feel the need to buy potentially better (?) phone? The Amazon promotional video tells us all we need to know! Let’s break it down, shall we?

First several seconds: People staring at the Fire in wonder in confusion. What, have they never seen a phone before?

Feature the first: Ah, now we know why their eyes were crossed. “When I turn it, it moves!” They were staring at the 3D dynamic perspective, one of the “unique features” of the Fire. Considering iOS 7’s parallax made me so nauseous that I had to turn it off, I do not find this feature appealing. YMMV, but I’m guessing no one believes that fake “Whoaaaa!” the woman in the blue shirt is giving us.

More on the dynamic perspective: “The device feels more attached to the world that you’re in.” But you’re not in that world. You’re not. Come back to us.

Favorite quote of the entire video: “The maps, by far, is my favorite feature. Because I’m ALWAYS getting lost.” Maybe if you lifted your face from your phone once in a while this would be less of a problem.

More about these amazing new “maps” I keep hearing about: “You can look around the city from different angles.” Fire: 1, reality: 0.

“It seems like maybe I know my way around a little bit better with this.” Thank you for being so definitive on that. Like I’m kinda sorta convinced you won’t walk into a brick wall.

“I loved the maps that show the Yelp reviews.” Yelp? What is this strange word you’re speaking?

“I felt really engaged, like I was actually snowboarding.” Two things: one, look at this guy. Way to skew toward the young ‘uns, Amazon. And secondly, you have to stand up to snow board. And be outdoors.

Feature the second: One-hand navigation. Look, you don’t even have to touch your phone to control it anymore! You can just tilt it and menus to pop up and whatnot. To right, to the left, up, down, do the hokey pokey and turn yourself around. I mean, it’s not like the iPhone isn’t annoying when the screen rotates and you didn’t want it to. What are the chances something similar yet more irritating will happen with this technology?

Okay, but really, WHAT IS THE POINT OF TALKING ABOUT HOW MUCH YOU LOVE ONE-HAND AUTOSCROLLING IF YOU’RE USING TWO HANDS TO DO IT?

Feature the third: Firefly. It’s described to us as, “…almost like a search engine.” Huhn. That’s ALMOST the worst explanation I’ve ever heard.

“If it’s a book, it’ll tell you the name of the book and where to get it.” You mean the book right in front of you? That book?

I’m also guessing Amazon Fire Phone will tell you you should get the book at Amazon. Just pure speculation on my part.

“With an advertisement, it’ll show you the phone number and the email address.” You mean the info that’s probably printed on the ad? Seriously, people, you need to consider looking away from the phone once in a while.

Amazon completely glosses over the real use of Firefly, which is to let you shop for products on Amazon while you’re in a physical store. I’m guessing other retailers aren’t going to be too thrilled with that, not that people who shop Amazon don’t do it already. Moving on…

“I can just push the button and all the technology that I need is right there.” WHAT TECHNOLOGY? To do what? Sit in an empty room?

“If music’s playing, a song’s playing, you can instantly find out what the song is, you can find tickets.” Oh, they have Shazam? Hey 2000, how you doin?

Here’s where the Fire Phone video takes a dark turn…

“It’s almost like the world is a hyperlink.” THE ENTIRE WORLD?!

“They’re able to help you use the phone by controlling it.” Well that sounds like a great idea. What could go wrong with “them” controlling your phone. Oh but it’s customer support, so NBD.

This woman is bizarrely excited Amazon is ushering in our dystopian future.

“I think it’s great, he was able to draw on the screen and show me how to bring up menus.” You know someone’s going to use that technology to draw a penis on your phone. You just know it.

“It’s really quick.” This poor man is being exhausted by his phone.

“Yeah, you’re not getting it back.” Uncomfortable smiles all around!

And there you have it, folks. Judging from this video, the Amazon Fire Phone is the perfect smartphone for white people in their 30s who never leave their sparsely-furnished apartments and haven’t seen a phone since 2001. So that should be a pretty large market.

What are your thoughts on the new Amazon phone? Cool enough to give it a buy?