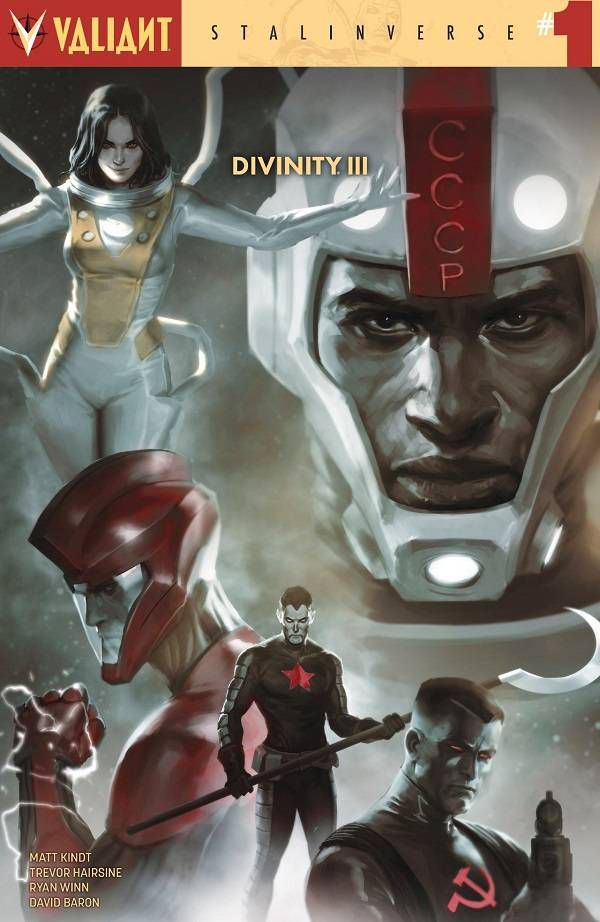 Spoiler warning: this article directly describes and shows plot elements from throughout Divinity III: Stalinverse. You’ll still have to read the whole thing to see how events play out, but you have been warned!

Divinity (2015) was one of the graphic novels that led to me falling in love with Valiant Comics. It was self-contained, clever, and touched on a variety of superhero archetypes without devolving into a stereotypical slugfest. Divinity II followed a year later, and Divinity III wrapped up just last March. What started as a curiosity and launching point for getting into a new comics universe has become a seamless trilogy delivered by a consistently excellent core creative team in writer Matt Kindt, penciler Trevor Hairsine, inker Ryan Winn, and colorist David Baron.

Here’s a quick recap of what this Divinity business is about: in Divinity, cosmonaut Abram Adams was sent into space with two teammates to explore the cosmos in the 1960s. They made a strange discovery that gave Adams bizarre powers over space and time, and he returned to Earth to basically reside in a self-made paradise. This led to meeting many of the major personalities of the Valiant Universe, and ended in something like a truce, including Adams gaining the code name Divinity. The comic established that Valiant’s impartial god is a black man who wouldn’t exist if he wasn’t adopted by the state as a child. In Divinity II, Adams’s teammate Myshka returned to Earth as well, with an identical power to manipulate reality itself, although her goals were much more Russo-nationalist. Adams seemed to talk her out of forcing an ideology on all of humanity, but walked out of the confrontation into the Stalinverse, where Divinity III picks up. Whoops, the Soviet Union won anyway, and the world is now under Vladimir Putin’s command! 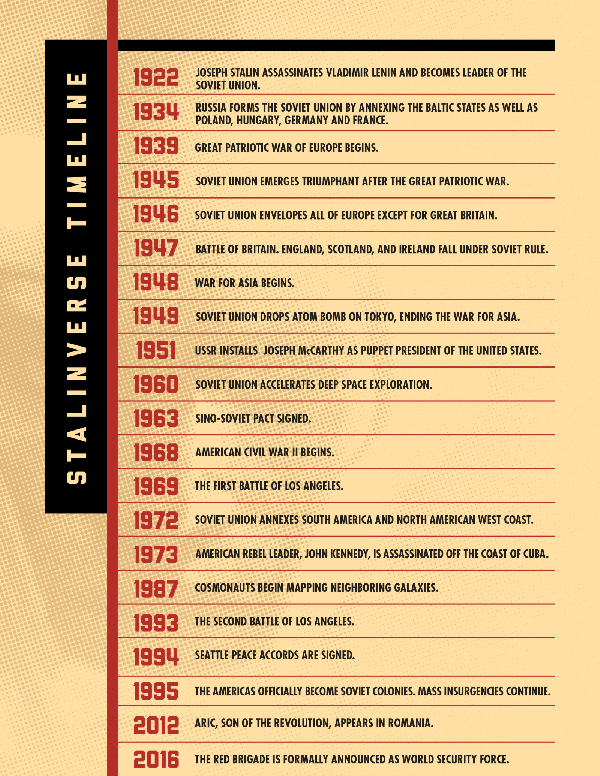 From “Divinity III” #1 (though this timeline appears in each issue). There’s something to be said about two Battles of Los Angeles but peace accords signed in Seattle.

That pesky Putin, right? Always secretly affecting the outcome of major events… in comics! In comics. Right. One of the major differences between Divinity III and its prequels is the inclusion of tie-in issues that tell the stories of other Valiant characters in this alternate reality. Between the core  story and tie-in issues, I would like to highlight some of my favorite aspects of Divinity III: Stalinverse.

Everyone In The Red Brigade 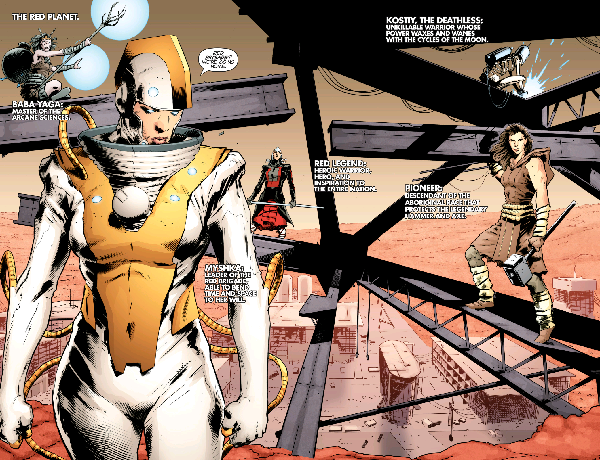 The tie-in issues to Divinity III, collected in the Tales From The Stalinverse trade, include backup stories detailing the origins of The Red Brigade, an all-women fighting force with roots in Russian history and folklore. They are shown as a united force colonizing Mars (the red planet, indeed) at the beginning of Divinity III, but their individual stories are also interesting and the door is left open for them to reappear in Valiant’s “normal” timeline. I can’t wait to see where they appear next, as any one of them could star in her own series. Alternately, Valiant readers probably wouldn’t be surprised to see Baba Yaga clowning on Shadowman, or Pioneer commiserating with Aric about adapting to modern times (for example: colonizing Mars).

A Conflict That Can’t Be Punched 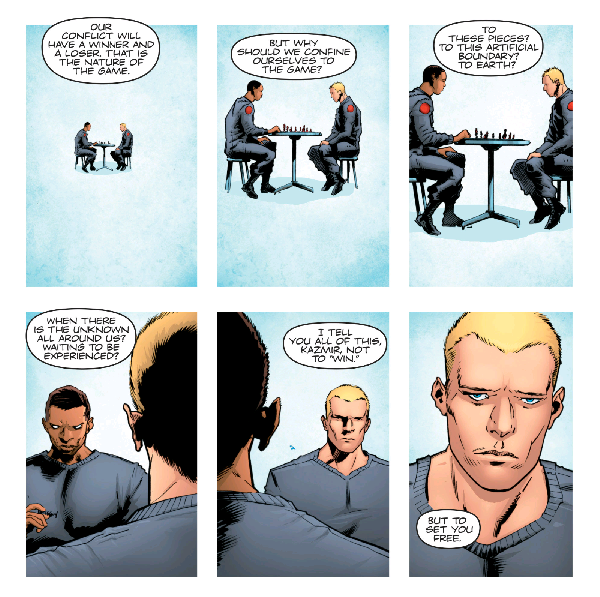 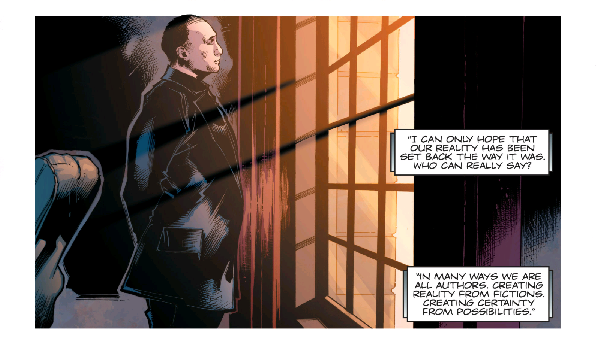 The more cerebral nature of Divinity-level conflicts has been around since Abram Adams touched down in the first Divinity book and consistent in sequels and cameos since then. When dealing with near-omnipotent individuals, simply convincing them to take a certain course of action is as good as rewriting the laws of existence.

Side note and example: Toyo Harada’s repeated attempts to recruit and engage with Adams in the Imperium series constitutes one of my favorite standoffs in all of superhero comics. How do you catch someone who can dodge through time? How do you hold a grudge against someone who can rewrite your memories? These ideas and puzzles come up throughout the Divinity series, as well. 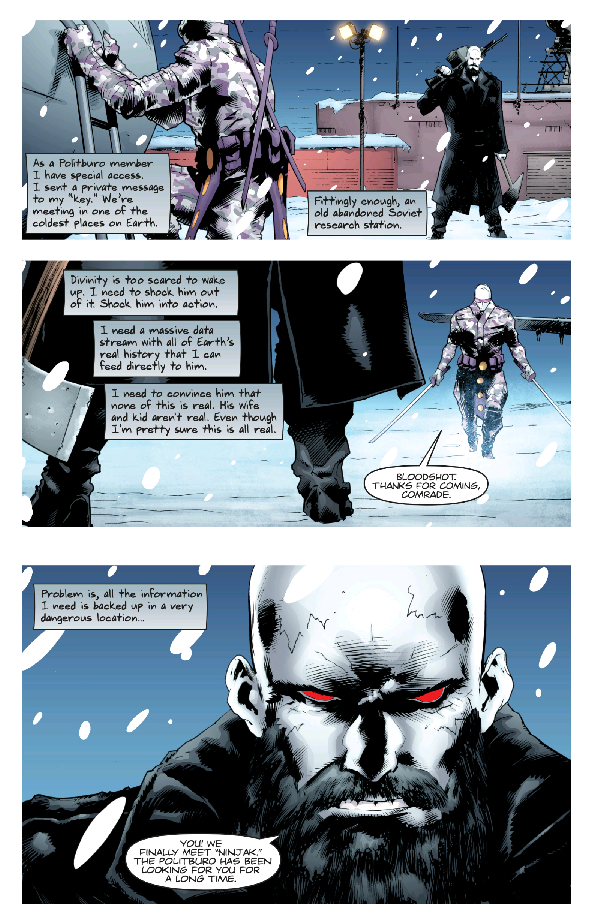 From “Divinity III” #2 by Kindt, Hairsine, Winn, Baron, and Lanphear

…what? I’m just talking about Ninjak keeping a diary and records of pre-Divinity existence and transmitting that information using the network of nanites in Bloodshot’s bloodstream. I’m certainly not drawing any comparisons to current political figures or alleged cover-ups. However, I would not be surprised if Kindt had a crystal ball of some sort. Also, the fact that “secret agent ninja fights the T-1000” isn’t a headlining draw of this series should tell you this comic is something special.

Portrayal of Religion As a Positive Force 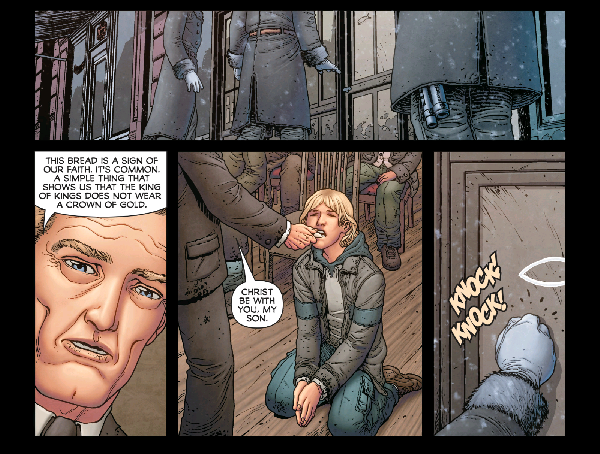 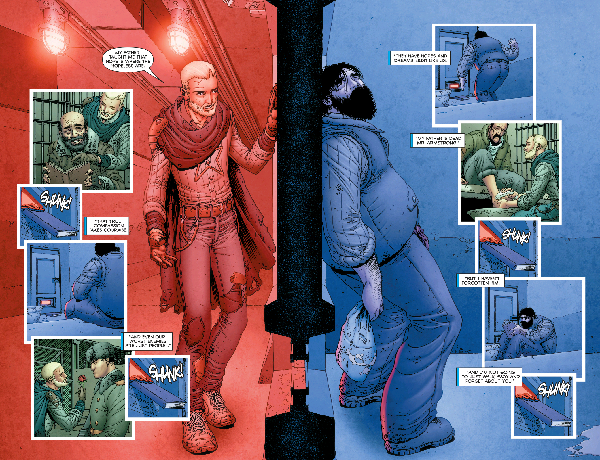 From “Divinity III: Escape From Gulag 396” by Rahal, Portela, Dalhouse, and Sharpe

Religion can be twisted toward abusive, despotic ends, but also constructive and charitable ends. It’s possible to portray religion in a positive light without beating readers over the head with conversion propaganda. Obadiah Archer learning humility and service during covert Christian gatherings, then getting recruited by a secret order of monks to publish and distribute copies of banned books is righteously badass. Archer’s ability to live his principles in jail, determined to reach a despondent Armstrong and sacrifice his own freedom to save someone else, makes him an example of Christian morality at its finest. 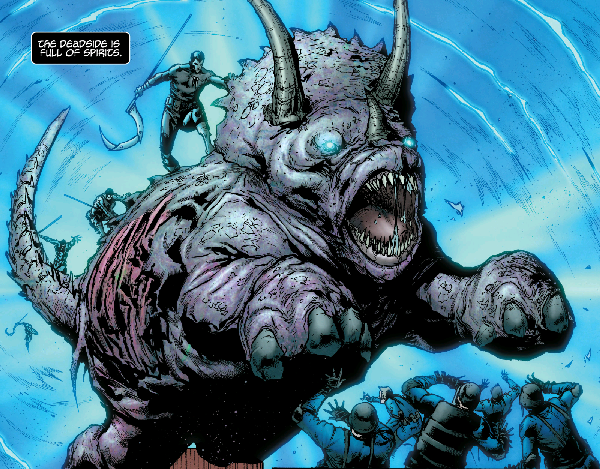 Sometimes a dinosaur escapes the netherworld, and that makes everyone’s day.

These are just a few of the many pleasures of Divinity III and the series as a whole, and I would love to hear your thoughts too.