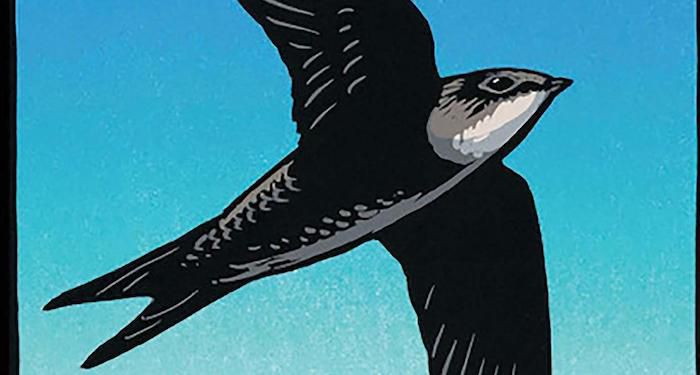 When Helen MacDonald’s new book Vesper Flights came out here in the U.S. in August, I inhaled it in a rapturous blur. The beauty of the prose and MacDonald’s ability to write about animals flew past as I read. However, there was one scene in a chapter toward the end of the book that has haunted me since. In it, 23-year-old MacDonald is out checking the fence line of the ostrich enclosure on the Falcon Conservation farm where she works when she and her boss’s wife come across one of the ostriches trapped in the fence with a broken leg. From there, she writes:

“The compound tibiotarsal fracture was so obscene, a chaos of torn red muscle and splintered white bone, that I went straight into full-on emergency mode. I searched my pockets and pulled out a miniature penknife branded with the logo of a local photographic shop. I unfolded it, picked up a big rock, hit the ostrich over the head to render it unconscious, then knelt and cut its throat to put it out of its misery. Keychain novelty penknives are not sharp. It took a while. You do such things when there is no other thing that can be done. I got up, watching the bird’s one good leg kick until it stilled, the blankness of sheer necessity receding then to leave a wash of simple, overwhelming sadness in its wake.”

This paragraph has played in my head over and over; the feel of it making my fingers tremble. Part of it is because the pen and the rock and the ostrich are so clear, and the other part is because I know the feeling she describes.

When I was the same age as MacDonald I worked on a farm, but my charges were horses, not falcons. One summer morning, as the feed truck puttered up along the fence line to the far pastured, I spotted Millie, the big sorrel mare, standing her front foot cocked near the fence. Something was amiss. Why wasn’t she with the other horses? Why was she standing so weird? When I got closer, I discovered that Millie had caught the fence’s wire between her foot and the metal of her shoe, the nails neatly trapping her.

Before I had a chance to think, I grabbed the rusty pair of pliers I used to cut hay bales open from the back of the truck and gnawed at the wire with them
until Millie’s foot was free, then pulled the piece of wire remaining out of her shoe and sat there in the dirt staring at her walk away to join the herd as if nothing had happened.

As I panted on the ground, watching the now loose piece of wire flop in the dirt, my mind kept spinning with all the ways both Millie and I could have ended up in the ER. If I had left her for longer, she could have pulled back, dislocating her shoulder or breaking her leg. The mare could have panicked completely, ripping the fence up and trying to run with it behind her, ensnaring her pasture mates in the process. As I cut her free, she could have accidentally kicked me the head or smashed my fingers with her feet. None of those things happened, but my heart raced as though they had.

Macdonald notes that she has not told very many people the story of the ostrich. After one person heard it, they told her she sounded like a sociopath for killing a large bird with a rock and a penknife; no one after hearing mine would accuse me of the same. (Although there will be internet trolls who will have feelings about wire fences.) Nevertheless, the rushing clarity of “emergency mode” that the author describes in the scene was exactly what I felt in that moment with Millie and several others throughout my life with animals. Of course, she killed the ostrich, I thought as I read it and then reread it; that is the only thing to do, even if it was awful to do it.

Perhaps one of the reasons that Helen McDonald’s popularity has exploded is because of how it so clearly, openly, and honestly describes the messy, beautiful honesty that is a life with animals. One that those of us who have lived this life no with a wordless part of ourselves, but while often heartbreaking, teaches us about who we are in ways very little can.