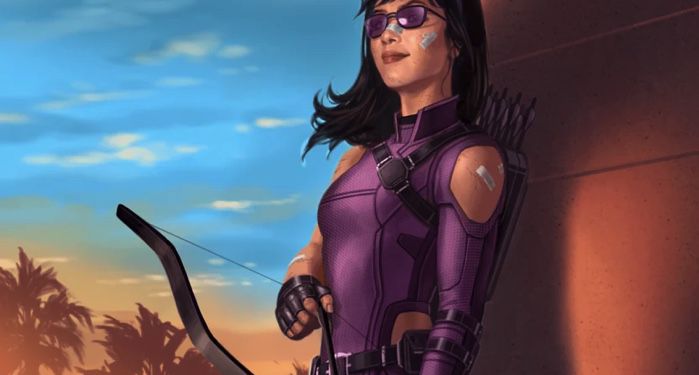 All I want for Christmas is a brand new Hawkeye. And not some ragamuffin you pick up from the side of the road, dust off, and throw at a kid. I want a shiny new Hawkeye, with aviator glasses, quips for every occasion and a stunning clutch to match. I’m talking Kate Bishop, not Clint Barton. Hawkeye, not Hawkguy. And I want more of Kate Bishop from comics (compared with whatever the hell happened to Barton). Kate Bishop is the best Hawkeye; so good it makes her too good for the Avengers. On November 24, Disney+ releases its new Hawkeye series with Jeremy Renner returning to his MCU character Clint Barton. However, I’m more interested in Hailee Steinfeld as Kate Bishop.

Who is Kate Bishop?

Bishop first appeared in Young Avengers #1 (April 2005). She was the last to join the team, after essentially saving their butt during a botched rescue attempt at Kate’s sister’s wedding. Decked out in a purple designer dress, Kate had a brief moment as a hostage before stabbing the guy in the leg with one of Patriot’s throwing stars. While the action didn’t give her an instant invitation to the Young Avengers, it did connect her to a timely altercation with Kang the Conqueror, which doubled as an audition for Captain America.

Cap was impressed with her skill and improvisation, collecting weapons as she fought alongside the Young Avengers. It was Cap who suggested she take on both the name and the bow of Hawkeye. A fact that surprised even the Hawkguy himself. But considering it takes a lot to impress the Cap, this was a clear indicator Bishop did good.

What the rest of the team didn’t know was why Kate wanted to join the team in the first place. In fact, the wedding was not the first time she had met the superheroes. Way back, Kate was attacked in Central Park and the event left her very shaken. Up to that point, Kate had been the rich Daddy’s girl. The attack in Central Park was enough to wake her up and inspire her to become a hero. She never wanted to feel helpless or see anyone attacked like that again.

Bishop is the Best Hawkeye

It’s no surprise Barton would be wary of anyone claiming his name as Hawkeye. He has had his fair share of imposters trying to claim some aspect of his identity. Even in the movies, the poor guy had Loki running around in his head. However, Bishop has been something different from the very beginning. Barton was constantly testing Bishop, claiming you couldn’t be Hawkeye without besting Hawkeye. And even though she didn’t pass the ‘Robin Hood’ test, she impressed him with her guts and determination…and breaking into the Avengers’ base to steal back her bow. A very Hawkeye move.

The new Hawkeye series on Disney+ looks to be inspired by Hawkeye: My Life as a Weapon written by Matt Fraction with art by David Aja and Javier Pulido. In the comics, Bishop and Barton are already friends, professionally share the title, and co-own Lucky the Pizza Dog. I doubt the streamed series will be start off with the same level of camaraderie since they need to introduce a whole new character. To be fair, having Hawkeye in a leading role is going to be distracting enough; it’s not like the guy has had a lot of screentime previously, nor has Renner given him the support or interest Barton deserves.

Hawkeye, as a title, is more than bows and arrows. It is more than sarcastic quips and witty repartee. And this is where Bishop is the best Hawkeye. Bishop truly believes she is doing the right thing for the right reasons. That is her ‘due North’ and she has never swayed from that. From the time of her Central Park assault, Bishop has levelled up to prevent it from happening again. Barton does a lot of good stuff as Hawkeye but he too easily strays when tough issues come to hand. We’ve seen that in the MCU with Ronin and we’ve seen it plenty in the comics. It’s one of the key reasons Bishop leaves him in New York and starts anew on the West Coast. Even Lucky knows which Hawkeye to choose.

The biggest difference between Bishop and Barton is that Barton is an arsehole (as per Hawkeye: Little Hits). He can be a real jerk.  He’s tired. He’s done. And that’s fair. Bishop is still motivated by good, and her good intentions don’t take away from her skills; they kind of make her adorable instead. This alone should make it easy for Renner/Hawkeye to pass the torch to Steinfeld/Hawkeye and give the character some fresh air.

Bishop is Too Good for the Avengers

Does all of this mean the new Hawkeye is joining the Avengers? Well, that’s a tough one because the MCU Avengers are pretty much done. The original team is a mixture of dead, old, or out of town. The latest streaming series are all indicating a new generation of Avengers, with the possibility of some Young Avengers crossing over. However, it’s not clear exactly who goes where. Cap/Wilson is our only known, with everything else left to speculation.

Bishop was not one of the founding members of Young Avengers. However, she was the convincing factor for both Captain America and Barton to support and sponsor the young heroes. Bishop even spent time as leader of the team. It was Bishop’s courage, skills, and charm which keep people going. She is not one for bullshit or drama. We saw a lot more of this Bishop in Hawkeye: Anchor Points written by Kelly Thompson, with art by Leonardo Romero and Michael Walsh (read our previous article here). The MCU Avengers feed on drama. The new generation might not be as hungry, but I really can’t see Bishop wanting any of that mess. Just let her do her job and enjoy the ride.

There’s one more reason why Kate Bishop is too good for the Avengers, be it the original MCU cast or whatever Next-Gen they are creating. It’s because she deserves better than the half-attempt the MCU gave to Hawkeye so far. Bishop is not a character to be pushed off to the side and only brought out when your scene-palette would ‘pop’ with a bit of purple. Bishop brings a genuine sincerity to her superhero job; something grossly missing from most of the line-up. She has worked hard for what she has. She has learned from the best and made it her own. From Clint Barton to Jessica Jones, Bishop has grown as a character with depth and personality. Marvel Comics have offered her far more support with great writing than MCU ever did — until now.

Like many fans, I’m super-excited about the Hawkeye series on Disney+. Whether the MCU does Kate Bishop right in future team-ups is yet to be seen. Until then, Bishop seems pretty happy on the West Coast and I’m pretty happy with that.