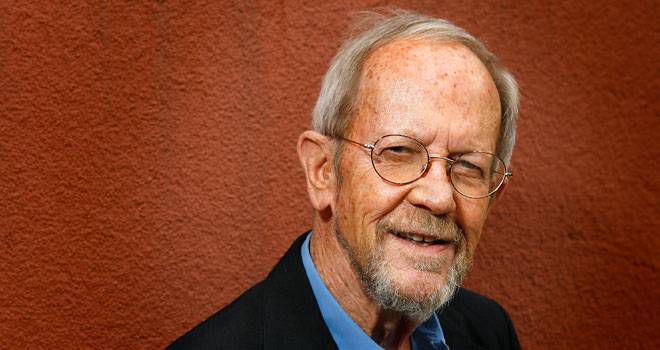 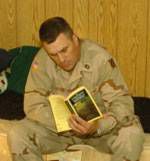 Meanwhile, I sat in my trailer on Camp Victory, a U.S. Forward Operating Base, two miles away–safe, cool, happy. I was happy because I lay on my bed, The Complete Western Stories of Elmore Leonard propped on my chest, my imaginative Reader mind somewhere far, far away, sneaking through Arizona deserts, hiding in rimrock, squinting down along my rifle barrel, placing the notch of the gunsight on the chests of no-good bastards who deserved to die.

Off the page, in the real world, the heat seared my tin-sided trailer and Blackhawk helicopters flew overhead, blades slicing the air as they ferried medical teams to the site of another attack. I needed to escape from the sound of those Blackhawks—the dopplering chop which meant more soldiers had lost their lives (or, at the very least, an arm or leg).  I needed fiction to relieve me from reality.

I was deployed to Baghdad with the 3rd Infantry Division in support of Operation Iraqi Freedom and I was supposed to be helping bring Western democracy to an Islamic nation reluctant to accept it. I was a soldier, I carried a rifle, I’d been trained to be a killing machine.

Trouble was, I hadn’t killed anyone. I was a paper-pusher in division headquarters, working in the public affairs office and writing press releases meant to reassure the rest of the world that, yes, we were kicking terrorism’s ass over there in Iraq. In truth, we were barely making a dent against the daily barrage of improvised explosive devices, rocket-propelled grenades and sniper bullets. If I ever stopped to look at the long-range big picture, I was filled with frustration to the point of despair.

When I got off work, I hurried back to my trailer (my “hooch” in military parlance) where I’d strip out of my uniform and sit on my bed in shorts and T-shirt with Elmore Leonard’s stories open in front of me. For the space of a couple hours, I could be a gunslinger in Baghdad, serving justice with hot bullets and bringing down bad guys left and right.

This was my introduction to Leonard’s writing—somehow, I’d missed reading his crime novels (Get Shorty, Maximum Bob, Out of Sight, etc.)—and I immediately saw why so many others thought he was King of the Page. His writing popped and sizzled. I was entranced and easily transported to the Old West, away from the woes of Operation Iraqi Freedom. Sure there was violence on these pages, too. But it was different in Leonard’s hands. It was cool as a drink from a mountain stream. Take, for instance, these opening paragraphs from the short story “The Boy Who Smiled”:

When Mickey Segundo was fourteen, he tracked a man almost two hundred miles–from the Jicarilla Subagency down into the malpais.

He caught up with him at a water hole in late afternoon and stayed behind a rock outcropping watching the man drink. Mickey Segundo had not tasted water in three days, but he sat patiently behind the cover while the man quenched his thirst, watching him relax and make himself comfortable as the hot lava country cooled with the approach of evening.

Finally Mickey Segundo stirred. He broke open the .50-caliber Gallagher and inserted the paper cartridge and the cap. Then he eased the carbine between a niche in the rocks, sighting on the back of the man’s head. He called in a low voice, “Tony Choddi . . .” and as the face with the wide-open eyes came around, he fired casually.

He lay on his stomach and slowly drank the water he needed, filling his canteen and the one that had belonged to Tony Choddi. Then he took his hunting knife and sawed both of the man’s ears off, close to the head. These he put into his saddle pouch, leaving the rest for the buzzards.

When I heard Tuesday that Leonard, the “Dickens of Detroit,” had passed away after earlier suffering a stroke, my mind went back to Baghdad. If it’s possible to be nostalgic for a war zone, then EL’s death triggered some golden memories for me.

I saw myself in my tin-walled ball, air-conditioner rattling in one corner of the room, dripping condensation tears. I saw the bed, the wall locker, the mounds of junk food from care packages, the bookshelves I’d built myself one day after arriving at Camp Victory. And on those bookshelves, I saw the spine of The Complete Western Stories of Elmore Leonard. I saw myself reach forward, pluck it out, and turn to a page at random.

At midmorning six riders came down out of the cavernous pine shadows, down the slope swept yellow with arrowroot blossoms, down through the scattered aspen at the north end of the meadow, then across the meadow and into the yard of the one-story adobe house.

For nearly a month of my time in Iraq, I was lost in the Arizona arroyos, felt the Winchester in my hand as I sneaked through the canyons tracking Apaches, and tasted the swirling dust as I reined my horse sharply when the whine of a bullet ricocheted off a boulder. In my journal, I wrote, “Elmore Leonard is good medicine.”

Indeed. That year, I needed good medicine—especially of the literary, imaginative kind—to counteract all the bad shit going down outside the concertina wire of our camp: the bombs, the blasts, the bloodletting.

Thank you, Mr. Leonard, for writing my escape route.