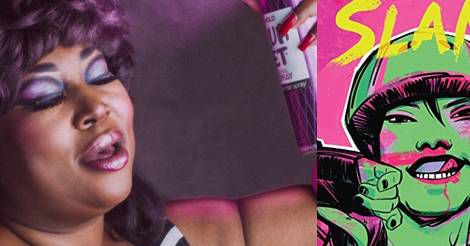 I binged Netflix’s new show GLOW because it’s pretty impossible not to. I was drawn in by the ’80s setting and stayed for the characters–mostly down on their luck or looking for their place in this world (L.A.) ladies. While I know I watched at least some of the original episodes of Gorgeous Ladies of Wrestling as a kid (You don’t need to be a wrestling fan at all or know the original show to love Netflix’s GLOW.) I don’t really have much of a memory of it. My friend, on the other hand, remembers it playing before Rhonda Shear’s Up All Night–If you remember that show you just read the “Up” all squeaked-up. I have no clue if this is an accurate memory on her part or how we sometimes blend childhood memories together as adults, but I do know she was super excited in her remembering watching Gorgeous Ladies of Wrestling with her cousins and we spent a lot of time gushing over the new show.

Netflix’s GLOW isn’t a remake, but rather a fictional imagining inspired by Gorgeous Ladies of Wrestling and it’s awesome and everything I didn’t know I wanted. It also left me with a deep desire to hang with these ladies, so I’m packing up a DeLorean that I saw on eBay with books and traveling to the ’80s to give these ladies some reads– and to hang out and try out some wrestling moves, of course. 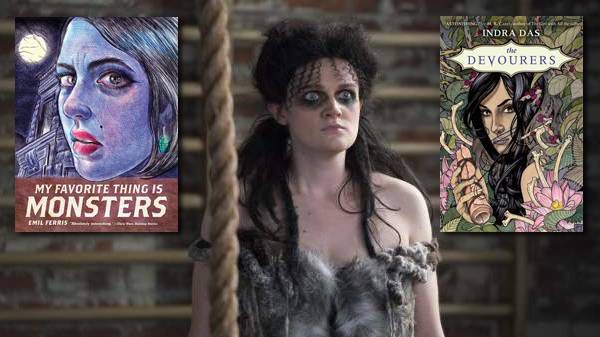 Sheila the She-wolf: Oh Sheila, my little wolf, I’m so happy you’ve found a place in this world where the true inside-you can shine. And for those times the other ladies want to hug you or talk too much to you and not give you the space a lone wolf needs, here’s the audiobook The Devourers by Indra Das. What’s this iPhone loaded with audiobooks, you ask? We’ll talk about that later– right now all you need to know is this intense, original, and brutal story about a professor and the half-werewolf he meets is everything you want to read right now. I look forward to your thoughts, Wolf. Oh, and when you’re done with that you have to read Emil Ferris’ My Favorite Thing is Monsters. Seriously, the girl identifies with monsters and I think you’d totally understand each other. 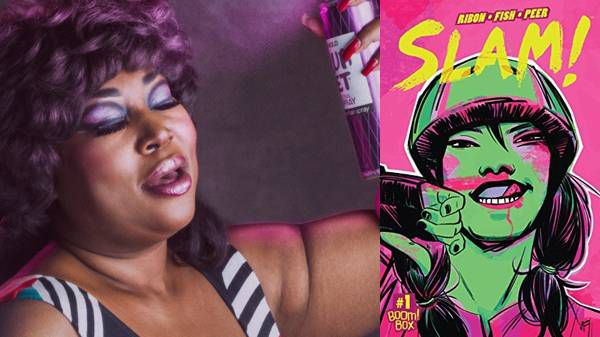 Tamme´ Dawson: Dawson, you look good in the ring! Like maybe you’ve done this before? *wink-wink. Clearly you’re athletic and know how to put on a good show, so I’m handing you a new (in 2017) comic series SLAM! (because not only are you awesome in the wrestling ring, but I know you’d be awesome at roller derby, too). Yes, I am trying to tell you that I’d pay money to both watch you wrestle and slam some ladies while on skates! 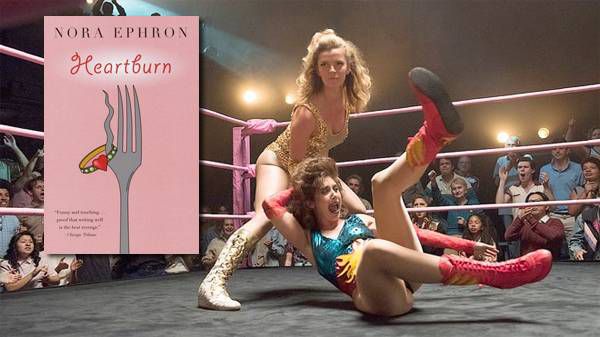 Debbie Egan: We don’t know each other, so rather than totally invading your personal space and hugging you I’m going to hand you the audiobook Heartburn by Nora Ephron, narrated by Meryl Streep. You can talk to Wolf over there about the whole “what’s an iPhone?” thing, but the important thing is I think Ephron’s novel, which is what she wrote in response to catching her husband cheating on her while pregnant, will be like having a friend that can totally commiserate with you. Plus, it’s Nora Ephron, so even if it’s dealing with sad, frustrating, anger-inducing life moments, it’ll still be funny. 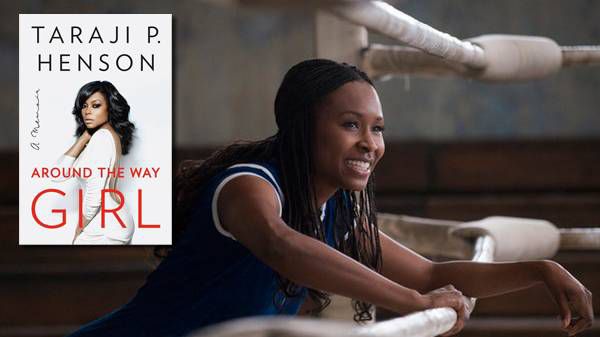 Cherry Bang: Trying to make it as an actress is hard! I know because I’ve read a lot of actor memoirs and they generally struggle a lot, for many years, before finding success. I think Taraji P. Henson has a lot of valuable life stories in her Around the Way Girl audiobook–I know you don’t know who she is, but I’m from the future and I promise she’s a big deal and had to work her ass off to get to where she’s at. Just be warned you’re going to want to immediately be her best friend as soon as you’re done with her memoir. 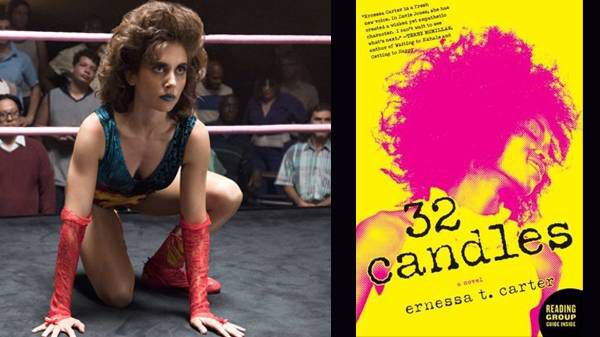 Ruth Wilder: You wouldn’t happen to be related to a Joan, would you? She’s a romance novelist, had a rough trip through Colombia recently? You may want to ask your parents… Anyhoo, while you keep trying to figure out your life and your gigantic misstep, I have 32 Candles by Ernessa T. Carter for you. It’s a novel about a girl who runs away (in the ’80s!) and grows up having to pave her own way while learning a bunch of valuable lessons. Her name is Davidia Jones and I think you’d really enjoy getting to know her– plus she ends up being great at giving advice. 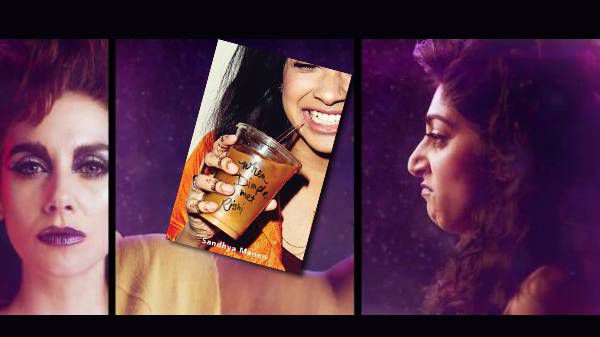 Arthie Premkumar: Between studying, having to help out your roommate with her hardcore crush, and being given a character to portray that fans the Islamophobia flames, you look like you need a break! So I brought you Sandhya Menon’s When Dimple Met Rishi because it is a totally delightful novel about a young Indian woman and man beginning their career paths while possibly finding love. Maybe Dimple’s tenacity–or the Bollywood dancing–will inspire you to demand a better character and more time in the ring. 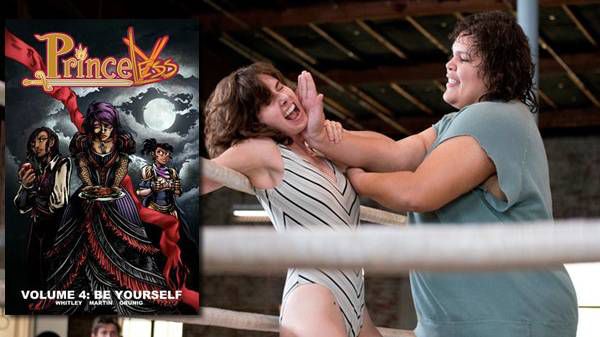 Carmen Wade: You’re so awesome and already come with the passion for wrestling many of the other women don’t get, but it’s a shame that your family doesn’t get it. Well they get the wrestling passion–big time–they just don’t get the part about letting you follow your dreams. I’d like to share with you one of my all-time favorite comic series where the girls/women are awesome and they save themselves, usually while butting heads with family members: Princeless by Jeremy Whitley. 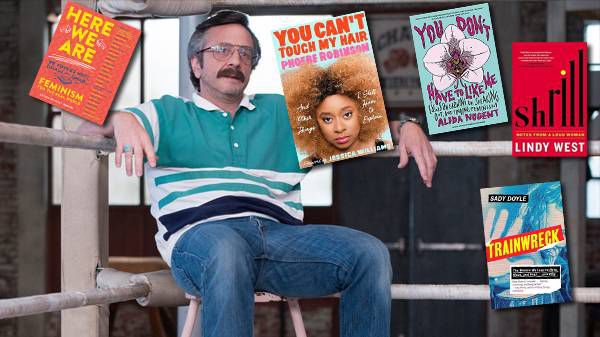 Sam Sylvia: I have no idea who thought you’d be the best person for this job, but here we are apparently, so sit down and watch your head cause I’m going to throw some books at you and you’re not getting up until you’ve read them all and fully absorbed the information. Ready? Here comes:  You Can’t Touch My Hair: And Other Things I Still Have to Explain by Phoebe Robinson; Trainwreck: The Women We Love to Hate, Mock, and Fear… and Why by Sady Doyle; Shrill: Notes from a Loud Woman by Lindy West; You Don’t Have to Like Me: Essays on Growing Up, Speaking Out, and Finding Feminism by Alida Nugent; Here We Are: Feminism for the Real World by Kelly Jensen. You can ignore all the things about technology and shows, etc., that you may not understand yet, just focus on the actual messages.

Think I’m going to hang out here in the ’80s for a bit to learn some wrestling moves and keep book clubbing with the GLOW ladies. I can already feel my hair tripling in size.