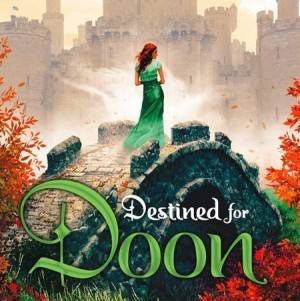 This giveaway is sponsored by Destined For Doon by Carey Corp and Lorie Langdon.

In this sequel to Doon, Mackenna Reid realizes she made a horrible mistake–choosing to follow her dreams of Broadway instead of staying in the enchanted land of Doon. To make everything worse, she’s received her Calling–proof she and Duncan are each other’s one true love–and it’s pure torment, especially when visions of the very alluring Scottish prince appear right before she goes on stage. So when Duncan tells her an ancient curse threatens to overtake Doon and the new queen needs her to return, Kenna doesn’t have to think twice. With darkness closing in on all sides, Kenna and Vee must battle a world of nightmares in order to protect the kingdom. But it will take the ultimate test of courage for Kenna to salvage her happily ever after.

We have 10 copies of Destined For Doon for 10 lucky Riot Readers! Just complete the form below to enter. Entries are limited to the United States and will be accepted until 11:59pm, Wednesday, September 24th. Winners will be randomly selected.