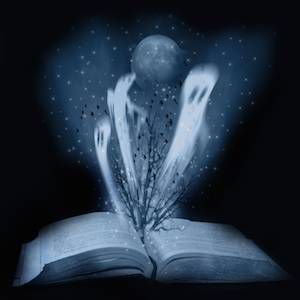 I’m a horror reader from the way-back. I started reading Stephen King in sixth grade. Goosebumps, Christopher Pike, Anne Rice, John Saul–horror was my fucking jam, but I didn’t ever really find it that scary. I read IT and didn’t come away terrified of clowns*; I never had to put a book in the freezer, even though The Shining is a ghost story and probably should be in my “scariest book ever” category, but since I don’t have the shining then I don’t feel that I’m in any danger. Hashtag fraidycatlogic.

The stories that do get to me? Ghost stories. Ghost stories forever. I once spent a month sleeping with the lights on because I watched a marathon of Ghost Hunters. (I’m not exaggerating for humor, here. I slept with the lights on for weeks. Weeks. And I know that show is totally fake.) The original Scary Stories to Tell In the Dark books were pants-wettingly scary to me. I don’t even actually believe in ghosts, but I still can’t go into a dark room if I’ve been exposed to any kind of ghost story. I had to read House of Leaves** in the daylight only.

Why are ghost stories so scary? I’ve been prodding at that question lately, and while I’m certainly no expert on fear and the human psyche, I’ve come up with a few possible reasons:

Ghost stories seem like they could be real. Even if you don’t actually believe in ghosts, there’s a really good chance that you know people who do and who have ghost stories to tell you. I had a roommate who told me that his family home had a ghost. Another friend told me that she had an experience with an evil spirit once. I don’t have any friends with vampire stories or werewolf stories, but ghost stories abound.

Plus? Weird shit happens to people whether you believe in weird shit or not. Even when you can come up with a rational explanation, that doesn’t keep you from being creeped out in the moment and recalling that creepage later.

Ghosts are hard-to-impossible to defeat. Ghosts can fuck with you even when you can’t see or detect them. They can be completely incorporeal and still smother you or drag you out of bed and slap you in the face. You never know when they’re coming. You can’t fight them unless you can find a priest who is willing to do an exorcism (good luck in 2015). Your best option is to move out of your house and hope it’s not your child manifesting a poltergeist.

Ghosts always seem pissed off. I’d probably be pissed off, too, if I died and someone moved into my house and was disrespecting me all the time. How dare you throw out all of my prized possessions that have been sitting in the attic for a hundred years? I was saving that for when I’m not dead anymore! Girl, I know you did not decorate my bedroom in cotton-candy pink. In combination with the fact that ghosts can invisibly destroy you, them being angry makes them 100% scarier.

Human evil is real and scary and so ghosts that have human evil seem real and scary. The most convincing evil is often human evil. We know human evil exists–turn on the news and you’ll see too many examples. The idea of a person who could serial murder children or slowly poison their mother to death lingering long after shuffling off their mortal coil as a force of pure twisted hate . . . aw, hell. BRB, I just wet my pants at Starbucks.

What do you guys think? Are there stories that are somehow more terrifying than ghost stories? Tell me your thoughts in the comments!

*I do have a small fear of clowns, but that’s down to John Wayne Gacy and not Pennywise.

**Even though this isn’t really a ghost story in the traditional sense, it hits a lot of the same notes for me (mysterious supernatural force you can’t see or fight that fucks with your house and family).