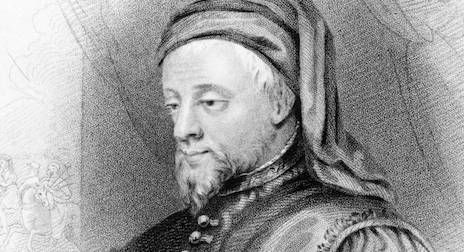 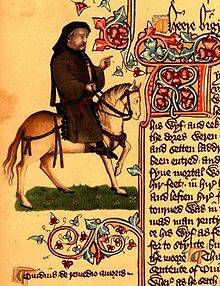 Chaucer from the Ellesmere Manuscript

This year, I missed my personal Chaucer Day celebration. Woe. It was on April 17, 1397, that Geoffrey Chaucer first told The Canterbury Tales at the court of Richard II. For medieval scholars, there are many things to love about Chaucer – his language, of course; his rich cast of characters; the glimpse he gives us into the lives of regular medieval people. I even had a shirt from the Arizona Center for Medieval and Renaissance Studies (ACMRS), which is run through my alma mater, that said, “The lyf so short, the craft so long to lerne.” Yay, Parliament of Foules! I wore that thing until it was in tatters and thoroughly indecent.

I know I am just a medieval geek and it takes really very little for the geek juice to come spewing forth and get all over everything. Sorry about that, I’ll clean it up. Yay, socially awkward. But honestly! Chaucer! He had such a rich and layered life. Civil servant to kings. A poet. Some even say spy, though we aren’t entirely certain of that one. I like to think he was. It makes sense: his first patron was John of Gaunt, and he was ransomed by Richard II when he was captured by the French. I am not a politician, but I’m not really sure why the king would do that for someone who didn’t do the espionage things.

When I was in school, I considered The Canterbury Tales to be one of the most perfect pieces of literature. I loved nearly everything about it. It was bawdy, it was holy…it was written in a Middle English vernacular I could actually figure out! I enjoyed the microcosm of medieval life it depicted, and the Tales sparked in me a lifelong love of medieval stories. I wanted to know more about Chaucer and the time he lived – what WAS it like to walk down the streets of London in the 1380s? I’ve walked down many of the same streets – alleys, really, to my modern sensibilities – as Chaucer did. Did he see any of the same stones in the buildings? Was that same cobblestone there, whole and new, when he walked the road as it was when I tripped over it, chipped and moldering, while gawping at St Paul’s Cathedral?  Did he actually know someone like the carpenter or his wife in The Miller’s Tale, or the Prioress, the Squire, or the Clerk? Did he worry about his kids’ school experiences like I worry about my daughter’s? Surely he was above such human concerns and never worried about feeding his family, never sat up at night with a sick child, never worried about work if he had a dick boss. Well, actually, he most likely did, and that is his appeal to me. I think he did all of these things and more.

But Chaucer is more than just another dead white dude and the so-called father of modern English. He was, in my opinion, a proto-feminist. There is a ton of debate amongst scholars about this, hardly any of which I listen to. I figure we cannot, and must not, judge a person or time by our own modern standards. As fun as it is to analyze his works in light of feminist theory, we really can’t expect him to have been a pillar of feminist thought by any modern standard. For a man writing in the 1380s, though, Chaucer had some very well rounded female characters, including a beloved, feisty woman who brashly spoke her mind, loved sex, wanted sovereignty, and didn’t care who knew it. I’m looking at you, Alisoun of Bath. Within the social expectations of medieval life, for a male poet to have even considered that a woman would want sovereignty over herself was quite progressive, in my opinion, and worthy of note.

And so, in honor of Chaucer’s influence on my literary life, here are some books featuring or inspired by him.

Troubled Bones – image used with kind permission from the author.

Troubled Bones by Jeri Westerson. This is the fourth book in Jeri Westerson’s fantastically fun (yet very well researched) Crispin Guest medieval noir series, and Geoffrey Chaucer plays a big role in this particular novel. In this installment, he is the former best friend of Guest, disgraced-knight-turned-sleuth. Both men find themselves embroiled in a murder at Canterbury Cathedral surrounding the bones of the martyred Thomas Becket, on the hunt for both murderer and a hidden heretic, and Crispin is forced to wonder if Chaucer isn’t actually guilty of the crime himself.

If you haven’t yet discovered the Crispin Guest books, you need to get busy reading right now. The series starts with Veil of Lies and is the first of eight novels thus far. Chaucer makes appearances in Troubled Bones and Blood Lance, which is my favorite novel of the series so far. 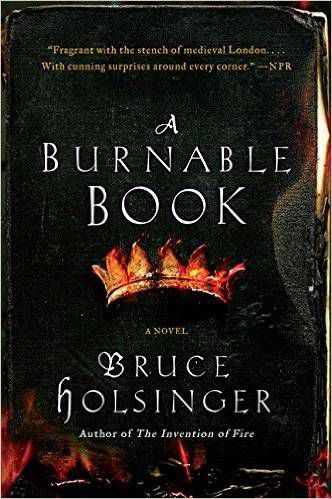 A Burnable Book by Bruce Holsinger. This is a brilliant novel by medieval scholar Bruce Holsinger about a mysterious book which supposedly predicts the end of England’s kings. Chaucer, who is a main character in the novel, gets the help of fellow poet John Gower to find the missing manuscript, which has fallen into innocent hands. The poets must retrieve the manuscript before those innocent lives are lost, and before the life of the king is put at stake. Holsinger is a professor of English at the University of Virginia and it shows in his writing, which is rich with historical nuance and impeccable research. A Burnable Book and its sequel, The Invention of Fire, show Chaucer in his day job as a civil servant who happens to dabble in poetry… 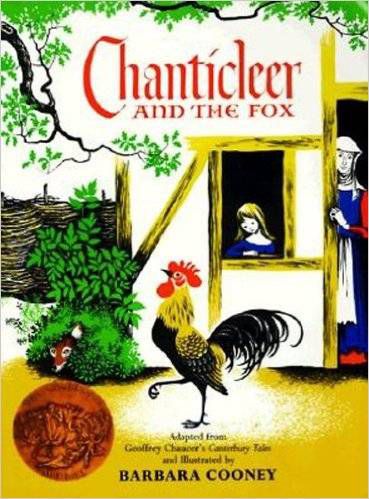 Chanticleer and the Fox by Geoffrey Chaucer, adapted by Barbara Cooney. This is a wonderful children’s adaptation of “The Nun’s Priest’s Tale” about the arrogant rooster Chanticleer and his encounter with Reynard the fox. I truly believe that everyone should know and love Chaucer, and that children should be exposed to great literature from a young age. The illustrations are beautiful and the story has anthropomorphized barnyard animals that the little ones will love. Of course, as with many wonderful children’s stories, it also has a great moral that parents can talk about with their spawn, for the betterment of society. We will read all manner of stories to our children anyway, so let this lovely book be one of them.

Please let me know what other books you’ve read that have Chaucer as a character, or which were influenced by his works!