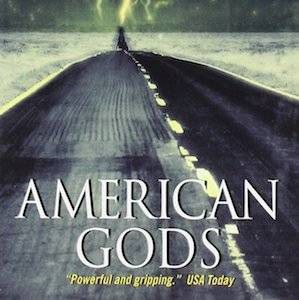 This is a guest post from Martin Cahill. Martin lives in New York, just outside that sprawling metropolis everyone’s always talking about. Bookseller by day, bartender by night, freelancer at all other times, he writes whenever he can. Every so often he remembers that sleep is important. He has fiction appearing soon in Nightmare Magazine and Fireside Fiction. He can be found writing about books and beer at his blog https://martintcahill.wordpress.com. He will also be attending the Clarion Writers’ Workshop this summer in San Diego. Talk to him about craft beer, books, Community or Locke & Key and you’ll most likely become fast friends.

A black sky, heavy with the threat of storms. A strike of lightning at the end of a long, winding road, set deep in the heart of America. A name I had never heard of.

“Who’s this guy?” I said, looking at the cover, spine, jacket, synopsis, turning it over in my hands like a strange shell just found on a beach.

My dad shrugged. “Haven’t read a whole lot of his work but he’s done some comic book stuff. That’s one of his novels. Go for it, you might like it.”

From the opening line, I knew I was entering a whole new world. By the time I went to bed, I knew it was something gripping, like a fever. By the time I finished the book, I was itching for more, couldn’t get my hands on his other work fast enough.

I was fourteen, and I had just read American Gods, my first Neil Gaiman book. You could practically hear the floodgates opening, enormous ivory things, ornamented with sweeping arches, gilded in obsidian, just waiting for the right key.

Up until that point, I’d been raised on a steady diet of what most might call classic fantasy: I had devoured Tolkien, Lewis, Jacques, and more. My mind was full to bursting with noble men and women, talking animals, good and evil taken to their extremes. I lived in worlds of rich landscapes of thought and magic and wonder, where one could drink a cherry cordial on the parapets of Redwall, or clutch closely to Aslan’s mane as he ran through the forest. The heroes were square-jawed and noble, the villains bathed in shadow and cackling.

Reading American Gods, I saw something new. Angles of light were cutting through what I’d read before, illuminating reality in ways I’d yet to experience. I saw a world that began to intrude on my own, fantasy that began to leak into reality. I saw a world that was a little more vicious than kind, a world of nitty gritty, of ambiguous morality, where people couldn’t be called good or evil because reducing them to those terms would be lazy, would discredit their complexities, their histories, their desires. A saw a world that was brutal in its magic, and thirsty for blood or sacrifice or both. I saw that fantasy could have teeth, sharp and shining, waving for me to follow down the rabbit hole.

At the close of the book, (which I will not spoil), I was baffled but in the best way possible, like watching a street performer pull off a trick right before your eyes, and being unable to track it, watch as the ball went from hand to palm to behind the ear in one fluid motion. It was an ending that left questions unanswered, magic unexplained, plots vaporizing like smoke in the sun, there and then gone, yet none the worse for wear.

And yet I was satisfied.

Beyond that, I was intrigued! Who was this man? How did his mind work? What else was out there in the world, that I hadn’t yet read or known? What other magic, what other sharp teeth were hiding in the shadows?

It wasn’t long before I devoured Gaiman’s entire line of work, from Sandman to Coraline and beyond. It shorter still before the people he spoke of, Warren Ellis, Allen Moore, Garth Ennis, Stephen King, all began to line my shelves, taking me with them to their own worlds of skewed angles, dark magic, and complications. I haven’t regretted any one step in the dark, through their worlds, occasionally splintered by passing starlight.