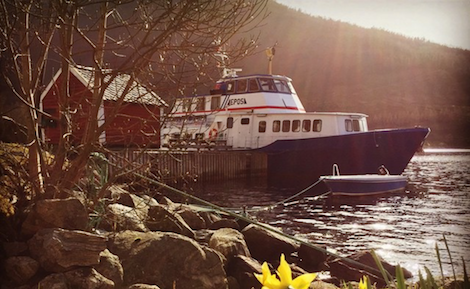 As I argued a while back, libraries aren’t just staid, immobile buildings (as awesome as those buildings can be). They’re found all over—from horseback to donkey-back, from vending machines to supermarket shelves.

Just recently, a new library-on-the-move has been making headlines: a library now installed on the Leo Tolstoy express train from Moscow to Helsinki. To celebrate that fun new find, I want to highlight that train as well as some other fascinating, unexpected places you might find a library.

And, of course, there’s an Instagram contest to go with it. Passengers can take a picture, post it with #finruslitonboard, and be entered to win a book. Delightful!

Since 1959, several counties along the west coast of Norway has been served by a boat-borne library, most recently a ship called Epos.

Transporting 6,000 books as well as space for shows, author readings, and other events, Epos is a staple of local life as well as the tourist trade along the coast. It originated out of a need for connection at a time when travel by land was complicated and the sea was an obvious solution. And it’s lasted for decades, showing it was pretty clever to put a library on a boat.

Also, just check out their Instagram and tell me it doesn’t make you want to hop the next flight to Norway.

These ones makes the Internet rounds pretty regularly, and you can see why: they’re definitely among the most unexpected libraries you’ll ever find. Argentinian artist Raul Lemesoff is responsible for these tanks-turned-bookmobiles, constructions he refers to as “Weapons of Mass Instruction.” the pin

He then drives his tank/bookmobiles around, giving books away to anyone who wants one. The Weapons of Mass Instruction are cute, and totally viral (for obvious reasons), but they’re also more than that. In a country where public life was for decades marked by violence both incredibly visible and officially obscured, a weapon transformed into a tool for community-building is especially powerful and especially unexpected.

The Open Public Library in Krems, Austria, is a moving twist on the Little Free Library. Located in Jüdischer Freidhof Krems, a local Jewish cemetery that was nearly destroyed under the Nazis, the take-a-book, leave-a-book library was conceived by artists Michael Clegg and Martin Guttman. A memorial that would, while marking a solemn location also encourage interaction and the sharing of space, the library is a beautiful reminder of the power of books to bring us together—whether they’re in a library building or not.

Do you have any favorite libraries in unexpected places?