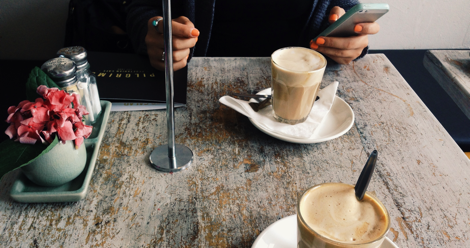 One of the best things to come from meeting up with Book Riot Insiders from my city is having more to read than I ever imagined. Well, okay, most days that’s just stressful—there are so many book recs, I’m actually okay with selling my soul for immortality at this point—but some Insiders, like Amy McKie *waves*, are smart with their recommendations. They give you free short stories. 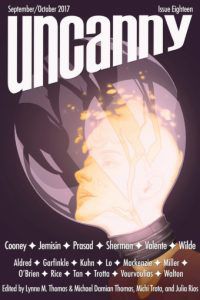 Specifically, they give you free short stories like “Fandom for Robots” by Vina Jie-Min Prasad (gods bless you, Amy), which could not be more up my alley unless the alley was named after me and belonged to a nation I ruled. The story follows Computron, a thinking robot that learns through a show and its fandom how to be a feeling (or some approximation of feeling) robot. There’s a lot more to it, of course, but I’m going to let you go ahead and experience it, maybe re-read it, and then subscribe to Uncanny magazine.

I don’t remember when I first read this short story, but the second time around it happened to be open when I was trying to tune out a conversation on the train—of course I’d forgotten my headphones—and was absorbed into Computron’s world all over again. I was so immersed, I missed my stop. Also? I definitely pulled off the “I’m-really-not-listening-in-on-your-much-too-loud-argument” expression that I worry I can’t sell because most of the times what I’m reading on my phone doesn’t transport me out of the TTC experience and I actually do end up listening in on people’s much too loud arguments.

So, basically, by “emergencies,” I mean transit.

Or any social gathering that requires you to be present, but doesn’t give you much of an opportunity to have any real conversations and what introvert wants small talk? Not this one, okay? Apparently, short stories help in these situations—especially if you keep forgetting headphones like me—so I found a few more, you know, just in case. 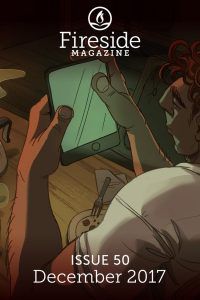 My second recommendation is “Never Yawn Under a Banyan Tree” by Nibedita Sen from Anathema magazine. This story takes the superstition of never sleeping under a banyan tree and weaves a moving, funny tale about a Bengali girl who swallows a ghost while on a blind-date set up by her mother. I love this story so much, I honestly want a novel for it, one that is as beautifully produced and designed as Leigh Bardugo’s Language of Thorns because Meena’s story deserves nothing less. If you find yourself wanting to re-read this one, maybe consider subscribing to the magazine. And if you like the feel of this story—sweet and magical—you may also like “Riddle” by Ogbewe Amadin about a girl named Idara who wants to be a witch like her aunt, though Idara’s mother insists that witches are evil. This one is a flash fiction—a form that would serve you well when, for example, your BR Insider friend is trying to catch a Pokémon and you don’t have the need to catch ‘em all—from Fireside magazine, also deserving of your patronage.

If you’re not in transit and aren’t worried about dying on the train or something (I am very dramatic about the TTC, I know) maybe you feel safe enough to read something darker. In that case, boy do I have the two gripping short stories for you. The first is “Jun and the Two Sisters: A Fox Story” by Kimberly Wang, edited by Rachel Morgenstern-Clarren. It’s my favourite type of short story: a cutesy murder short story! Or, at least, it starts out cutesy and then moves seamlessly into actually terrifying. “Aurora’s End” by Kylie Lee Baker is terrifying in a different way because unlike my previous recommendations, it isn’t speculative fiction. It’s a twisty story about a girl who has witnessed her brother drowning, could not save him, and is dealing with the resulting trauma. You can find (and support) more stories like these at Joyland and The Puritan, respectively. 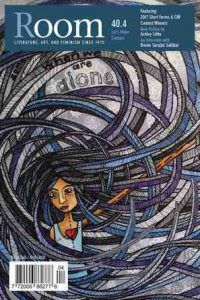 And, finally, I recommend “What Grows” by Rebecca Fisseha from Room magazine. This one, narrated from the point of view of a young girl watching the political system of her country dissolve and transition, presents harsh realities like a fable. It is unlike any other short story I’ve ever read and I loved it. You also have the option of listening to the author read the story aloud to you and that’s just another reason to show Room some love.

That concludes my list—for now. I always have awkward situations to escape by pulling out my phone, so do let me know what you like to read while in a panicky haze! Find more short story resources here.