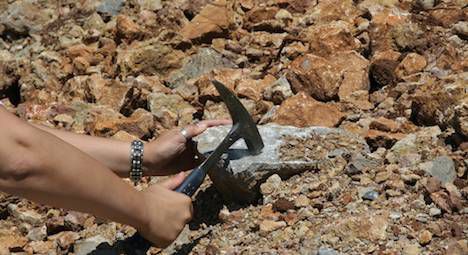 This is a guest post from Rachael Acks. Rachael is a writer, geologist, and dapper AF. Ze’s written for Six to Start and been published in Strange Horizons, Lightspeed, Daily Science Fiction, and more. Rachael lives in Denver with zir two furry little bastards, where ze twirls zir mustache, watches movies, and bikes. For more information, see http://www.rachaelacks.com. Follow zir on Twitter @katsudonburi.

Field geologists have a lot of best friends: rock hammer, Brunton compass, beer, hat, fleece vest, beer, insect repellent, beer, and good hiking boots to name a few. But I never went out on a field camp without at least one 400 page mass market paperback stashed in my backpack.

Partially, this is because in geology, there’s a lot of waiting. Waiting for a farmer to come unlock his gate so you can wander around on his property and contemplate his rocks. Waiting in the car for the overhead thunderstorm to blow over so you’re not the tallest thing above treeline. Waiting in the back of a suburban because it’s another geologist’s turn to drive and if you have to hear one more thing about the university football team, someone is getting pitched out a window. There’s something very comforting about reading a book by flashlight while you’re huddling in your sleeping bag in your tent and hoping those scary noises outside are just someone looking for the campground latrine and not some sort of large, carnivorous mammal.

But there are some non-standard uses I’ve put my beloved paperbacks to that I probably shouldn’t be proud of either. Though if you’ve already finished reading that book and moved on to the next, it could be worse, right?

Books make excellent camping tools. They’re great for weighing down the edges of tents when there’s a light breeze and one of your jerk coworkers has stolen your rock hammer to pound in his own stakes first. And that hole you didn’t notice when you were picking out your sleeping bag territory? Just stick a book in it. That’ll keep your left butt cheek from hanging lower than your right all night and giving you a near permanent limp in the morning. They’re the perfect weight for holding paper napkins and half-unfolded maps in place if no one’s willing to give up any of their hand samples for the text.

But no, I don’t care if you left your fire starters at the last site. Find some other paper. We’re geologists, not monsters. I said good day to you, sir. Good day.

Out in the field, my little mass market paperbacks did hard duty. I’d carry them around stuffed in my fleece vest’s pocket or my backpack. They make great field notebooks if you’ve managed to lose your waterproof yellow book like an idiot, you’d be surprised at the number of notes you can take in those margins. Just edit the scans of those later and stitch them together in photoshop so your advisor won’t feel the need to comment on your taste in fiction. And they make for good sample storage if you have something small and delicate that could get crushed by the contents of your backpack. My copy of Thud! once protected a thin, incredibly delicate piece of white claystone that marked the K-T boundary, the end of Earth’s most fantastic era recorded in Iridium-rich white ash.

I like to think Sir Terry would have understood.