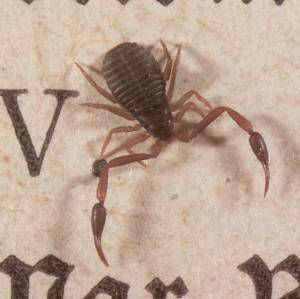 My favorite animal is the book scorpion. I saw one recently in a room where my parents keep old family Bibles, hymnbooks, and cookbooks. At first I thought it was a tick sitting on the wall, and I went to kill it. Then I noticed the claws, and I realized that I was looking at a book lover’s best friend.

Despite its name, the book scorpion (Chelifer cancroides) is not an actual scorpion. It has two claws like a scorpion but no stinger. Instead, the book scorpion is an arachnid that belongs to the family of Pseudoscorpions, where there are more than 2,000 different species. The book scorpion’s main habitat is in bookcases, but chances are you haven’t seen it because book scorpions are very small and rarely come out in the light. The body of a book scorpion is only 0.8–0.31 inches long and the claws 0.2–0.3 inches. The mating territory of a male book scorpion is approximately half an inch in size.

The book scorpion lives in your bookcase because it feeds off booklice (Liposcelis bostrychophilus). A booklouse is even smaller than a book scorpion; its body is under 0.07 inches in length. The body is pale with a prominent head that wears small antennae. When seen, it’s often mistaken for a young bed bug.

Booklice love books because they love starch. Starch is used to make the glue used by bookbinders. Therefore, once booklice get into your bookcase, if a book scorpion isn’t there to hunt them, you can say goodbye to the books made with starch-based glue.

The battle between book scorpions and booklice has been waged for as long as us humans have organized our written thoughts in libraries and archives. For example, in his work Micrographia (1665), the English natural philosopher Robert Hooke (1635–1703) mentions an animal that has been identified as a book scorpion. As a species, the book scorpion is not endangered, but it’s becoming increasingly rare to find them in bookcases. There are several reasons for this. One reason is that modern books are made with synthetic glue, which means that they don’t attract booklice the way old books do. However, all is not lost. Booklice, starch junkies as they are, can also be found in the flour bags in your kitchen cupboard. And where the booklouse is, that’s where you’ll find the book scorpion.

If you would like to have some book scorpions living in your bookcase, here’s what you need to do:

1) Buy old books.
Next time you’re thinking of buying a classic novel, don’t buy a new edition or download it to your ereader. Go to the used bookstore and pick up an old copy. Chances are you’ll be bringing home both book scorpions and booklice.

2) Keep your bookcase dusty.
The equipment we use to clean our homes is very effective. For the book scorpion this means that if you clean your bookcase too often or too thoroughly, you will kill it.