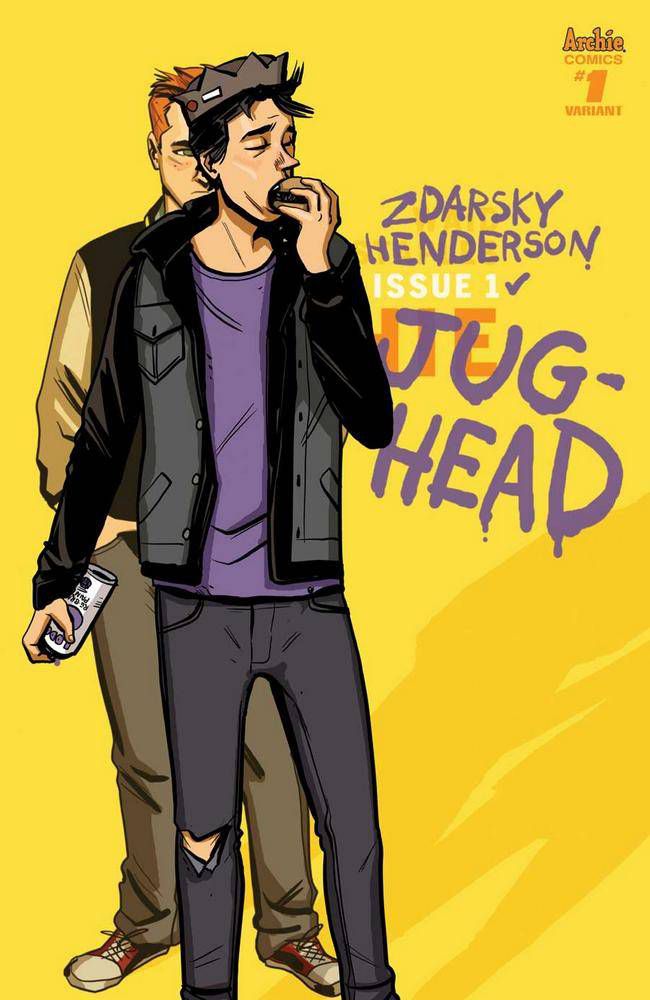 I gave the book a shot because Fiona Staples was on the book and I had never really gotten into the Archie books before (although I had dabbled in that Predator crossover from this year). And Archie started out pretty good — I enjoyed a lot of the first issue. But issue two didn’t connect with me and the third issue ending with bringing the Betty/Veronica rivalry back in full force. I might catch up with it later if I hear good things, but I don’t see it being a monthly read. Sorry, Archie … it’s not you, it’s me.

But one of the bright spots of the new Archie series for me was Jughead; this updated version has a dry sense of humor and his own unique (often spot-on) perspective on the situation at hand. I kept smiling during his moments. If only Jughead had a series of his own … oh wait, he does! It’s called Jughead and it comes out this week!

With art by Unbeatable Squirrel Girl’s Erica Henderson and writing by Howard the Duck’s Chip Zdarsky, Jughead is set in the same continuity as Archie, although the overlap in stories looks to be minimal (which means less chance of the Betty/Archie/Veronica love triangle being a major plot element in this book down the line). No, while Archie deals with the fallout from his break-up with Betty in his own book, Jughead starts with … no problems whatsoever. As he explains to Betty, if you go with the flow and don’t care about stuff, you won’t get upset about stuff. “Sorry if I’m just wise beyond my years,” Jughead says. “The world is out of our hands, pal. You just gotta make your own weird way in it.”

At least that’s what he says until the new principal (who has ousted poor Mr. Weatherbee) announces some drastic changes to the school lunch program — getting rid of all the good food. And like that, Jughead Jones finds a cause worthy of his time and passion and let’s face it, of course it was going to be food.

But before he takes up his banner of justice for people who like food, he has to deal with the shock of the cafeteria announcement — he does deal with it well. After fainting, the readers are taken into a non-sequitor of a dream sequence that is a clear cut parody of Game of Thrones. For “Game of Jones,” Betty is in Brienne of Tarth-like armor, Archie is Jon Snow (predictably knowing nothing), and Moose is Hodor. It’s hilarious and fits in just enough with the main story to be justified in existing but mostly it’s just a great little bit of satire in the middle of the issue. I’m hoping Zdarsky makes this a trend with future issues.

What sells all of this is Jughead Jones himself. It would have been easy for another creative team to make him blasé throughout the story, but by giving Jughead a focused, zealous mission, there’s a real chance for story among the jokes. The creators have complimentary skills, with Henderson’s trademark art style perfectly capturing our protagonist’s melodramatic reactions in the plot (the color work accenting those drastic changes in his mood, too) and Zdarksy’s sly dialogue pulling it all together.

This isn’t quite the Jughead you’d see in the old comics, but that’s not a bad thing; he still feels very much like the character without being a retread of where Jughead has been before. A thoughtful gesture towards the end of the issue shows that even though he was first motivated by personal (even selfish) reasons to take action, Jughead is not a completely thoughtless person and manages to save the day for one of his fellow classmates. He’s a good guy, even if he’s … singularly focused more often than not.

So yeah, Archie might not have wooed me … but I’m looking forward to a second outing with Jughead next month. What can I say — I like a guy who can make me laugh.