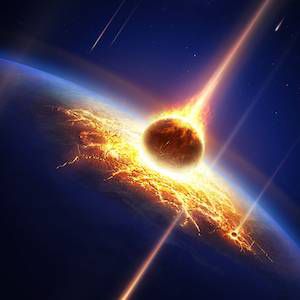 For decades, post-apocalyptic novels have been a mainstay of science-fiction. But lately it’s starting to get a little, well, constant. There’s definitely a place for post-apocalyptic fiction, a chance to study how people respond to society at its most simplistic levels. Still, there’s one big thing missing: the actual apocalypse.

If post-apocalyptic fiction shows you people at their simplest, if you rewind a little bit in time you get to see people at their basest. You get a chance to see what happens to personalities under pressure.

As a place to start, I highly recommend Ben H. Winters’ series, The Last Policeman. Starting with The Last Policeman in 2012, followed by Countdown City in 2013, and now the release of the final novel, World of Trouble, this summer, Winters watches society fall apart and stay together through his protagonist, Hank Palace, who lives in the small town of Concord, New Hampshire.

In the world Winters has constructed, set in the very near future, an asteroid is heading towards earth. Thanks to the wonders of science, we know the day and even the hour it will hit. We know what will happen to the world when it does. We know humanity’s odds of survival are slim at best. This vision of a planet looking death right in the eye is one Winters creates with worldbuilding skills worthy of the best science-fiction even though his books are technically mysteries.

So how do people cope in Hank Palace’s world? There are a lot of suicides. There are the “bucket listers,” who abandon their lives and families to live without responsibility in the time they have left. There is crime and looting. There are communities popping up to try and find some semblance of order.

And then there are people like Hank. Suddenly promoted to detective when the small local police force starts losing officers, he finds his life-long dream come true except for the fact that there isn’t much life left to enjoy it. The rest of the force isn’t taking their jobs too seriously, either. They’re trying to maintain what order they can, but they aren’t terribly interested in solving crimes. Hank has his own way of coping with impending doom: doing whatever he can to find answers.

In The Last Policeman he gets his first dead body, which appears to be a pretty obvious case of suicide. Hank can’t leave it at that and gives the dead man a full and exhaustive investigation. Hank needs to give people their dignity, to make their lives worth something. In Countdown City he searches for a woman’s missing husband, even though the number of missing persons is astronomical and without a car or reliable cell phones, it’s a near-impossible task.

The moon to Hank’s sun is his sister, Nico. She also wants to keep the world alive, but not in the small way Hank does. She literally wants to save it. She’s convinced there is a way to do it, that conspiracies are keeping that answer hidden, and she’s as determined in her search as Hank is in his. His orderly, compassionate approach against her ambitious, quixotic one grounds the series in a real relationship.

Reading these books makes you wonder which kind of person you’d be. A Hank, a Nico, a bucket lister. And you’ll find it’s hard to deny that we all have that bit of Nico inside it. You simply can’t get through these three books without hoping that somehow this will all be averted, that the world won’t actually end. These are bleak books, it’s true. It’s hard to commit to a series when you know from the first page that there won’t be a happy ending.

Yet Hank’s story and his day-to-day struggles are drawn with the kind of life you rarely find in post-apocalyptic novels that flash back to when the world was ending. In those books you know people made it through, you know that society has survived and can rebuild. Winters has a lot of guts to throw death at you as hard as he does. Who knew that the end of the world as we know it could be such a great read?