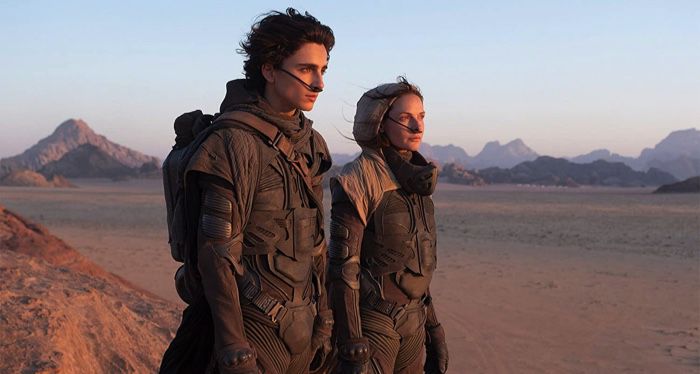 Dune fans rejoice: the trailer for the first part of Denis Villeneuve’s Warner Bros. Dune duology is finally here. Directed by Villeneuve and with a screenplay by Villeneuve, Jon Spaihts, and Eric Roth, the movie will come out on December 18, 2020, in IMAX and 3D (the release date was delayed from November 20, 2020). The two movies are based on the sci-fi novel Dune by Frank Herbert (first published in 1965). Dune won the first Nebula Award and tied for the Hugo. It is often called one of the most influential sci-fi novels of all time. This movie will cover roughly the first half of the novel. Watch the trailer here:

The trailer features much of the ensemble, but focuses mostly on Paul Atreides (Timothée Chalamet), son of Duke Leto Atreides (Oscar Isaac) and Lady Jessica (Rebecca Ferguson). The events of the novel are set in motion by Duke Atreides being sent to the desert planet of Arrakis in order to harvest melange (AKA “the spice”), a rare substance that enhances humans in life expectancy and mental capacity. There will be many discussions of the spice in the coming months—Chalamet already referenced it when he introduced the trailer on Twitter. The director, Denis Villeneuve, is no stranger to epic science fiction: he also directed Blade Runner: 2049 and Arrival.

In the trailer, we also get glimpses of Zendaya Coleman as Chani, Josh Brolin as weapons master Gurney Halleck, Dave Bautista as Glossu Rabban, and the joyful Jason Momoa as swordmaster Duncan Idaho, giving Paul the biggest and best hug. Stephen McKinely Henderson, Chang Chen, Sharon Duncan-Brewster, Charlotte Rampling, and Javier Barden are also featured in the ending card. Dune is truly a sci-fi epic and spans many great warring houses and ideologies. We don’t have an acting credit for the sand worm yet, but they’ve already basically stolen the show.

Dune has been adapted successfully twice before: David Lynch’s 1984 film starring Kyle Maclachlan as Paul Atreides, and John Harrison’s miniseries on the Sci-Fi channel in 2000 called Frank Herbert’s Dune (with a sequel series called Children of Dune focusing on the subsequent novels of the Dune saga). Other attempts have chronicled the difficulty of even making the movie, the most famous of which was chronicled in the 2013 documentary Jodorowsky’s Dune.

Fans of the novel have a ton of opinions about how this epic story should be adapted, and there is a lot of anger about what adaptations choose to leave out (especially the David Lynch film version). It’s a book that is always gaining new fans, and the broad themes of religion, empire, gender dynamics, and environmentalism throughout Dune invite constant discussion. On Twitter, it seems like fans are pretty excited, and Villeneuve’s recent streak of well-received sci-fi movies is making people optimistic. At the same time, fans are questioning why a story so influenced by Middle Eastern culture and Arabic language does not include any Middle Eastern actors.

To get ready for Dune, you can definitely reread or read it for the first time, and dive into these books like Dune if you need more.