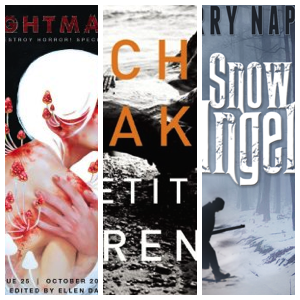 When Spider-Man: Turn Off the Dark started previews in 2011, I was pretty excited. Two of my favorite things, Spider-Man and musical theater, were being brought together in one spectacular project.

And then the problems started.

Flying went wrong. Actors were broken. Even without the problems, people weren’t really digging the show. Things weren’t working out. But after a half-year in previews and a monster overhaul, it drew in a pretty sizeable crowd for a couple more years.

Eventually, it went dark, and I was sad. I hadn’t gotten the chance to run up to New York and see it, and now it was gone. Best laid plans and all that.

Even before that was created, Alison Bechdel’s Fun Home was brought to life as a musical between 2009 and 2012 as it was developed at several playwrights’ conferences and theater festivals. The show had an Off-Broadway run a couple years ago, and is coming back in full force to take Broadway by storm very soon.

And who could forget this work of magnificence from 1975?

But what are some of the shows we want to see in the future?

Panelteer Caroline blew my mind when she suggested the rock opera Watchmen. Why hadn’t I thought of that? I’m not a fan of the comic, myself, but the right music could definitely bring me over to Rorschach’s side.

They wouldn’t even have to make a new poster.

There were other suggestions:

That even LOOKS like a group number is happening!

V for Vendetta already has an original song in the text. If we could take that and run with it, there could be an epic beyond what we’ve experienced. Whatever the step is beyond rock opera–epic on the grandest scale. Hans Zimmer Rock Opera.

Somebody take this and build the next Phantom of the Opera for me, yeah?

If the imagery translates properly to stage, Stray Bullets would be so much the opposite of anything currently on stage that it would be sold out for the next decade. Even though there are probably too many storylines to properly run together Rent-style, it leaves potential for some awesome staging and pretty psychedelic (emphasis on the psycho) musical numbers.

I’m sure we’d all love a Pretty Deadly musical. Kelly Sue DeConnick would probably even write it herself. Though, honestly, the costumes and set design might overshadow the rest of the show, unless we got gothic expert Frank Wildhorn to write the music.

Loki: Ragnarok and Roll (which I’ve exclaimed about before) completely lends itself to being set to music–but it would have to go straight to film because Titus Andronicus doesn’t approach the amount of blood that would be soaking the stage in the big Third Act sextet.

On a completely different note, A + E 4ever would be a very introspective show, with a smallish house band and lots of quiet numbers considering life, love and identity. A small ensemble would supplement the sound, but really, the two leads would have the bulk of the songs to sing.

And finally, Batman: Hush–strictly for the ensemble potential. We could see anything from a sexy pas de deux between Batman and Catwoman to a wild group number detailing the inner thoughts of some of the most famous Batman villains ever. Not to mention the potential for post-entracte, introspective Bruce singing “Yes, Father (I shall become a bat).”*

There are some moments in which the fourth wall just needs to be broken.

We could probably go on and on with this; there are very few comics–with the exception of some that are so massive that the idea of bringing them down to one run or issue that would make a great plot for a musical is impossible to conceive–that I (and several other Panelteers) don’t want to see as musicals.

What comic (character, run, plot bunny, single issue, whatever) would you see on Broadway?

*thanks for that one, Brian McNamara. I can’t not think of it, now.