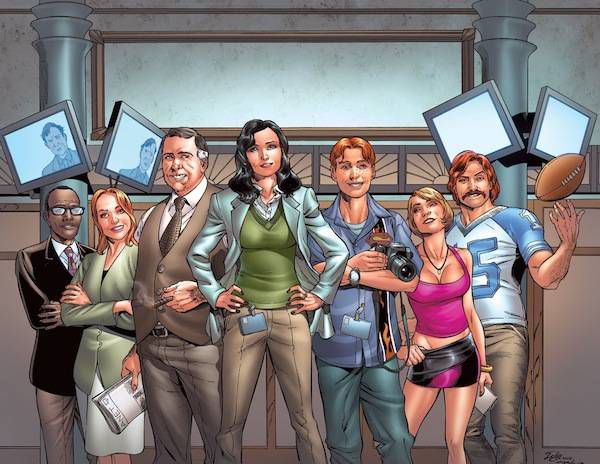 It should only happen in comic books: on November 8th, we somehow elected an uncredentialed, unprincipled millionaire who rose to political prominence on a platform of xenophobia and hate.

Our president-elect has already proven that he’s not a fan of the First Amendment and the freedom of the press it guarantees. During his campaign, he revoked the credentials of media outlets that criticized him too vociferously. He’s taken longer than any president-elect in recent history to hold a proper news conference, but he has managed to find the time to summon members of the media to Trump Tower to berate them and to attack the New York Times on Twitter.

At a time when progressives are facing down a long, hard fight against bigotry and corruption, I’ve been struggling to find much inspiration in superheroes, who make it all seem a little bit too easy. But there’s one classic aspect of superhero comics that I keep coming back to: journalism. Superheroes have been linked to reporters since the very beginning of the genre, and for good reason.

It starts, of course, with the Daily Planet. Lois and Clark are the most famous staffers, of course, but I love every single Planeteer, from Perry White all the way down to Z-listers like Ron Troupe.

Lois, Clark, and their coworkers are a utopian take on crusading journalists. There’s always a thrilling new story around the bend. Perry always has his writers’ backs. Circulation is consistently through the roof, and somehow the paper manages to remain solvent well into the 21st century. (Let’s all just quietly ignore Clark quitting a few years ago to start a blog, shall we?) I’m sure there are countless journalists out there who can cite Lois Lane as a personal hero while still explaining exactly how much of a fantasy every aspect of the Planet really is.

But even if we don’t get any more verisimilitude from Clark’s day job than we do from his airborne extracurriculars, it’s important to remember why Clark Kent is a reporter. Sure, it’s handy for hearing about breaking news that might require Superman’s attention, but more importantly, back in 1938, being a reporter was viewed as heroic in and of itself. Check out some Golden Age Superman comics sometime – Clark and Lois are constantly running up against criminals not because of Clark’s long johns, but because their work threatens to expose corruption, graft, oppression of vulnerable populations – and okay, yeah, not an insignificant number of sinister ray guns. But the corruption’s the big one.

On the other side of the Big Two, we have Ben Urich. Marvel’s always been more about the petty difficulties of day-to-day life, so it’s fitting that while DC has the glamorous, gleaming Planet, Marvel has the Daily Bugle, with its bullying editor, hapless freelance photographers, and vaguely tabloid-ish patina. Instead of young, handsome, strapping Clark Kent, we have Ben, a middle-aged, chainsmoking neurotic with a roach-infested apartment and much worse glasses. 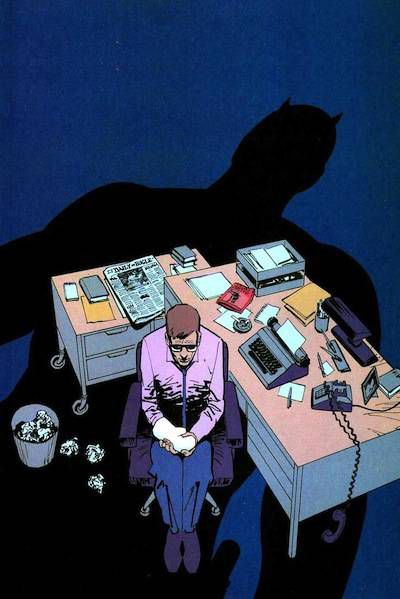 But I’ve been thinking about Ben a lot these days. I’m much more familiar with his appearances in Daredevil comics than Spider-Man ones, but by virtue of how Daredevil stories work, Ben often finds himself investigating the nefarious activities of a criminal overlord with deep pockets and little compunction over dipping into them (with his short, short fingers) to threaten his adversaries. There are multiple stories where Ben uncovers unsavory truths, only to be tempted to kill the story: by threats and even actual physical attacks against himself and his beloved wife Doris, but also by quiet bribes like a nice house in the suburbs.

What I find so human and compelling about Ben is that time and time again he wavers. Ben isn’t a man without fear; he’s a man with a difficult job who just wants his wife to be safe and happy and to go about his day without getting an assassin’s sai through his lung. He’s killed stories out of fear when they would have done some good, and agonized over the consequences.

In the end, though, he always prints the truth – at least, when it’s not a truth that is better off hidden, like certain red pajamaed New Yorkers’ secret identities. Ben’s a reminder that being a truth-teller isn’t easy or comforting or safe, especially when you’re facing off against someone with vast power. But we need the truth-tellers, more now than ever.

These are only two examples of the fourth estate in superhero comics, and I could go on – I could talk about how Britt Reid uses his privileged position as a wealthy publisher to fight for those who don’t have the platform he does, or the way the press gave female characters a voice and a weapon all the way through the 20th century, as Lois Lane begat fellow newshounds from Joan Mason to Vicki Vale to Iris West to Linda Park.

But what it comes down to is this: superhero comics are about heroism, plain and simple, and it’s no accident that they’re peopled with so many reporters. Even this most bombastic of genres has always recognized the impact of the written word, the importance of speaking truth to power, and the incalculable importance of free speech and a free press in a just society. In the four years to come, I hope the Loises and Bens of the real world keep fighting the way the fictional ones do. I know I will be.