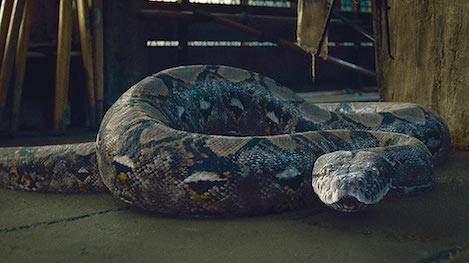 If I had a dollar for every cliché that legit applies to life I’d…hold on a sec. I think I just earned another dollar. But seriously, in these pretty dark times (both macro scale and micro scale for me, if I’m honest) we need some guidance to push us to be better, to do better, to live better. Enter: books. So many books. All the books. So I’ve been going through a self directed independent study of Defense Against The Dark Arts, relying on my trusty bookshelf to light the way toward hope and growth. Those arts include many personal tangles and also many tangles of the world at large (including You Know Who, and I think you know exactly who). I’ve been an at least average student, and my wonderful and patient teachers have included Amy Cuddy, Brene Brown, Anne Lamott and, most recently, Eckhart Tolle.

I came to Eckhart Tolle as a juggernaut of reluctance because a friend had once lent me the audiobook of The Power of Now which didn’t go over so well. When I plopped down to give it a listen I found Tolle’s voice was insufferable to my ear. It probably caught me in a foul mood, and I likened the experience to being read to by an old school Fisher Price Speak And Spell toy. I’m not proud. Please do not tell Eckhart Tolle I said that. (Please let there not be a Google Alert on his name, also.) (I’m so sorry, truly!)

I quit the audiobook after maybe twenty minutes of his gentle, humming German lilt. It left such an aversion that I avoided his books with enormous effort and success. Until now. Because, look, I know this is going to earn me another metaphorical dollar, but when the student is ready, the master truly will appear. Or apparate. Let’s go with apparate. 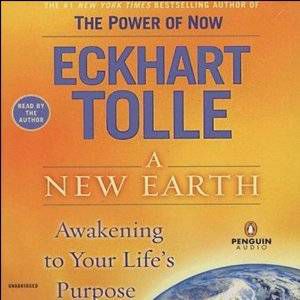 Lots of people love A New Earth. Including Oprah, who included it in her famous club. And it had been recommended to me by a trusted advisor (I have always secretly wanted to describe someone as my trusted advisor, so sue me). When a copy apparated on the bargain shelf of my favorite local bookstore, I took it as providence, because mama didn’t raise no fool.

Jk, my litany of foolery is too long to fit on this or any Internet.

A New Earth was incredibly helpful. It caused a number of growth spurts of self-awareness, and I owe Eckhart Tolle an apology, a thank you note, and a public retraction of what relics of the 1980s his reading voice does or does not sound like. The book was really excellent, and ended up totally being my jam.

Maybe it was luck, or synchronicity, or magic. I don’t know. But I’m grateful.

As you probably know, they’re bad news. Like, real bad. During his rise to power and terror, Tom Riddle hatches a plot that he believes will fill the void in his heart where all the good stuff should be. You know, things like love, friendship, generosity, kindness, compassion, hope, joy. There ain’t no substitute for them, but Tom Riddle’s muggle mom raised, by no fault of her own, not only a fool but a magical psychopath with enough personality disorders to reach the moon and back four times if they were stacked end to end.

What did he use to try to plug up that gaping hole in his psyche? Fear. Contempt. Self-preservation. Resentment. Control. Malice. And the biggest whopper with cheese of them all: immortality.

Conveniently, a horcrux will do just the trick for out last item there. In Harry Potter and The Half-Blood Prince, we learn just what the heck they are from the lovable Slytherin Horace Slughorn.

“A Horcrux is the word used for an object in which a person has concealed part of their soul… Well, you split your soul, you see, and hide part of it in an object outside the body. Then, even if one’s body is attacked or destroyed, one cannot die, for part of the soul remains earthbound and undamaged.”

Neat, huh? Project an aspect of yourself into an object! What a horrible, far-fetched thing J.K. Rowling invented. Right?

Not so right. That dark magic is probably uncomfortably familiar to many of us. (see also: this guy) (To clarify, I’m not talking about murder.)

It’s not too hard to connect the dot between Rowling’s horcrux and some sage perspective from Eckhart Tolle. He spends some time writing about the modern sense of self—what we believe to be our true self and what is actually the true Self and how to learn to feel the difference.

A New Earth has some strong Buddhist undertones, which I appreciate but struggle with. This is probably because I love things. Literal things. I love my apartment. I love my comfy grey sweatshirt. I love my guitar. I love my books. I love my bumble bee coffee cup.

Eckhart Tolle would argue that is precisely the problem—that I think of them as mine. Those two itty bitty innocuous letters that we so readily throw in front of nouns and adjectives are an invitation to get real confused about what we are truly made of. We use objects and possessions to assert our identity. When I throw on my canary yellow Hulkamania t-shirt, I am letting my flag fly—my flag of nostalgia, of weird patriotism, of my love of over-the-top antics. Would I feel sad if somebody splattered paint over it on purpose? I would. I would feel a sense of having lost a part of that internal flag.

But it’s just a shirt. It isn’t aware that it represents a hero of my childhood. It couldn’t even give two craps who was wearing it. It’s just a shirt I happen to sometimes wear. 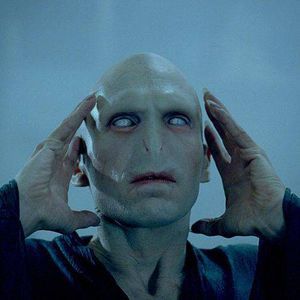 I bet Voldemort wishes he wouldn’t have been so attached to his nose, among other important things he lost along the way.

“Many people don’t realize until they are on their deathbed,” Tolle writes, “that no thing ever had anything to do with who they are. In the proximity of death, the whole concept of ownership stands revealed as ultimately meaningless.”

Buddhism is all about not suffering any more, which we can all probably get on board with. What causes most of this suffering? Attachment. Attachment to worldly stuff. And we are constantly losing things, am I right? We lose our comfy grey sweatshirts, our apartments, our cars, our class rings, our wedding rings, our favorite book filled lovingly in its margins with all our little epiphanies from our first read of it. Are we ourselves diminished?

Nah. We’re still here. Our soul remains undivided. Unless we let it be divided.

I am a sentimental fool with a nostalgia streak as wide as they come, so this isn’t easy. Attachment to stuff I love comes too easy, and in moments of loss I have acutely felt a sting in my little soul.

In that way, I’ve been innocently making horcruxes for most of my life. It would be great to stop, to try to fill that occasional void that comes with being a human not with more objects but with the good stuff Tom Riddle sorely, achingly lacked.