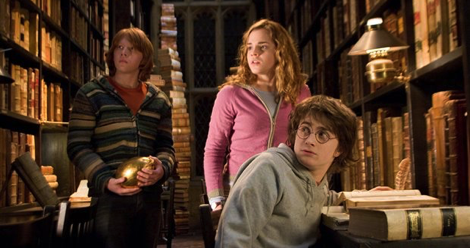 When I read news about more books in the Potterverse, my first reaction is always a groan. 15-year-old me would be horrified. It’s a far cry from my reactions to news of The Tales of Beedle the Bard, or Fantastic Beasts and Where to Find Them.

But honestly, even though we probably will end up buying everything she touches (talk about problematic faves), this has reached a point of exhaustion. And since JKR is clearly not letting Harry Potter die down any time soon, we thought we’d put these suggestion out in the universe, because these are the things we’d like her to spend her time on.

A formal letter to Johnny Depp, outlining his garbage existence and forbidding him from any further association with the Harry Potter franchise in order to immediately curb and minimize the effects of the harm already caused.

Book Deals Newsletter
Sign up for our Book Deals newsletter and get up to 80% off books you actually want to read.
Thank you for signing up! Keep an eye on your inbox.
By signing up you agree to our terms of use
– Deepali Agarwal

A picture book of Luna’s life before Hogwarts. And/or Luna’s diary.
– Ashley Holstrom

A book of recipes from the kitchens of Hogwarts, written in the very particular cadence of House Elves. A companion volume could be a book of family recipes from Hogwarts Alumni done as a fundraiser for a study-abroad program for promising young witches and wizards to have the opportunity to study at one of the other 10 wizarding schools around the world. It would include a whole chapter from the kitchen of Molly Weasley. – Cassandra Neace

A memoir by Hagrid. I don’t even want it done by a ghostwriter (well, unless we’re talking about Nearly Headless Nick). I want it specifically in Hagrid’s voice. And for the audio version? Take all my money.
– Elizabeth Allen

A database for good fanfiction writers so that you know who can write a good sequel story. JKR, I love you; The Cursed Child is not canon. There are dozens of talented writers that could have done the play better. Please consider this.
– Priya Sridhar

A comprehensive Harry Potter encyclopedia, complete with all the little notes and drawings and scribbles from when JKR was still writing the series.  A COMBINATION HARRY POTTER ENCYCLOPEDIA & SCRAPBOOK!  I volunteer myself as editor/researcher!
– Katie McLain

A prequel about the Founders. I’m super interested in their dynamic and how they created Hogwarts. And I want besties Godric and Sal (yup, he goes by “Sal”).
– Kate Krug

After giving us the seven most magical books in the world (literally and figuratively), you deserve to write whatever you want. But my dream is a prequel featuring the Marauders, Snape, and Lily.
– Alison Doherty

If you must stay in the HP universe, please give us Hogwarts: A History! But what I’d really like is a book about a girl detective, a non-magical Hermione type who solves mysteries in her spare time.
– Annika Barranti Klein

Rowling created a truly wondrous world with her original Harry Potter series, but the spin-offs and tie-ins have been a tad… disappointing. So, if she really wants to continue writing about magical exploits in and around Hogwarts, why not revisit the original series, but retold this time from the perspective of the real protagonist: Hermione Granger. I am 100% down for seven volumes of Hermione’s inner dialogue about how absolutely useless Harry and Ron are, how sexist the Hogwarts professors are, and how everything could be solved immediately if Dumbledore would just give her five minutes of his time.
– Charles Paul Hoffman

What would you rather JKR wrote?