Every now and then on Get Booked, there’s a question Amanda and I turn to our excellent contributors for help with. And since we have so many questions to get through, we decided to turn those into a series of posts! On the air we can only give one suggestion each, but happily there are no such limits for written posts. Read on, and let the recommending begin. (Also, please feel free to add your own suggestions in the comments!)


I’m trying to get my friend into reading, but I have no idea about what he might like. He used to like Matthew Reilly, he’s really into gaming (like, League of Legends), and he likes arguing with people. It also needs to be available as an audiobook.
Thank you so much. I love the podcast!
–Aoife 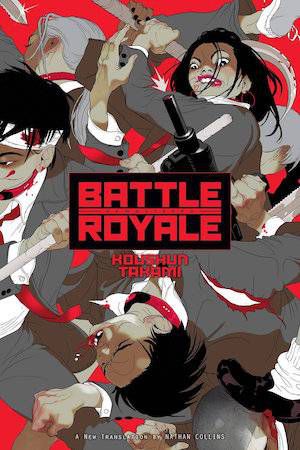 Battle Royale by Koushun Takami: As long as he doesn’t mind some (ok, a lot of) blood and guts, Battle Royale is a great pick for him! It’s a game with deadly consequences, everyone hates everyone (and therefore there is lots of arguing, followed by violence), and there’s an

Ready Player One by Ernest Cline: This is kind of a gimme, but this is my go-to pick for the gamer-turned-reader question. In a dystopia world where most people exist entirely in the universe of a virtual utopia, the game’s creator sets a challenge for users, based on his quirky love of retro 80s pop culture, and the winner is promised untold power and fortunes. It’s fun and nostalgic and the audiobook is perfectly voice by Wil Wheaton. — Rachel Manwill

Runtime by S.B. Divya: Marmeg Guinto wants a chance at a new life, and the Minerva Challenge is the way she can get it. Too bad it’s a grueling cyborg Tour de France style race through the Sierra Nevada mountains where she’ll be competing against racers with corporate sponsorships, extensive support teams, and the latest in exoskeletal and internal augmentations. This is a fun fast read about some of the possibilities with future technologies. — Nikki VanRy

Extra Lives: Why Video Games Matter by Tom Bissell: Bissell,an avid gamer, examines the growth and increasing sophistication of video games over the last couple decades and makes smart, informed arguments about why they might be the most important entertainment format available today. — Liberty Hardy

Infomocracy by Malka Older: I haven’t read this book but fellow Rioter, Jenn Northington, loves it. If you’re into thrillers and gaming, you might like Infomocracy which incorporates technology and its political implications into fast-paced read. It’s a great conversation starter as well. — Ardo Omer

Sleeping Giants & Waking Gods by Sylvain Neuvel: Both these books are incredibly readable, there’s a huge element of playfulness and discovery in them, and it feels like reading a really engaging computer game (or did to me) – Sleeping Giants starts out as a book about the discovery of a strange artifact, which very quickly leads humanity to discovering that aliens very possibly exist and maybe even lived on Earth once. — Ilana Masad

One More Thing by BJ Novak: Short stories, some really short, many of them amusing, some a bit philosophical, all of them clever. I read it over the course of several months, just picking it up when I felt like reading a few pages. The audio is supposed to be great too, with all sorts of guest stars. — Claire Handscombe

Parable of the Sower by Octavia Butler: This post-apocalyptic sci-fi is definitely an on the edge of your seat kind of read. When 15-year old Lauren Olamina escapes the violence that infiltrates her gated community, she sets out with the goal of establishing a community based on a religion she’s invented. So much to discuss in this page turner: race, survival, religion, politics. — Margaret Kingsbury

In Real Life by Cory Doctorow and Jen Wang: A graphic novel about a girl who feels most at home playing Coarsegold Online, a massive multiplayer role-playing game. She’s proud to join a guild of badass girls who fight the money-grubbing gold farmers messing with the value of Coarsegold’s currency, until she connects with a gold farmer from China who gives her details about his life outside the game. Suddenly Anda is forced to choose between the guild that empowers her and the new friends who she believes need her help. Amazing artwork (the juxtaposition between Anda’s avatar, her true self, and their eventual merging is gorgeous) and engaging characters make this joy for anyone who loves gaming or social justice. — Ashlie Swicker (Note: not available as an audiobook, but otherwise a good option!)